“Retail sales up 0.3% in February” is what you read in the headlines. In response, U.S. stock markets moved higher. Apparently the markets hope that consumers are finally starting to spend again.  Consumer spending is about 2/3 of total domestic spending, so this is a big deal – if it’s true. Let’s spend a few minutes deconstructing that number.

First, this increase is the “ADVANCE MONTHLY SALES FOR RETAIL TRADE AND FOOD SERVICES” from the Census Bureau.[1] The press release clearly states the margin of error is ±0.5%.  In other words, the 0.3% estimate is meaningless.  All we know with any confidence is that the actual growth rate is likely between –0.2% and +0.8%.  Don’t bet the ranch on this estimate.

Second, and more intriguing, a good part of the February growth was caused by a downward revision in January’s estimate. The advance estimate for January was +0.5% with an error of ±0.5%.  The revised estimate was +0.1% with an error of ±0.3%.  Make January lower and February looks better.  Are the numbers being fudged?  Nah, folks in Washington D.C. would never do that.

Third, these figures are nominal numbers.  While they are adjusted for seasonal variation, they are not corrected for inflation.  Assuming inflation is about 0.2% per month (2.4% per year), the advance estimate for real growth is +0.1%.  Anemic.

According to the Census Bureau press release, the advance estimates are based on a stratified sample of 5,000 retail and food service firms.  The total number of these firms is over 3 million.  While the sample covers 65% of the dollar volume, there’s a reason the margin of error is so high: 65% is quite a distance from 100%.

The chart below gives some perspective.  This is based on inflation adjusted data from the Department of Commerce Bureau of Economic Analysis for January of each year.[2] 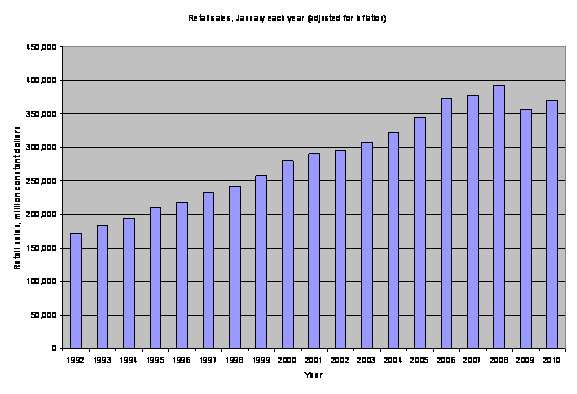