On Tuesday (July 20) President Obama met with British P.M. David Cameron.  Mr. Cameron stated his intention to cut British government spending by 25 percent in the next three years.  Mr. Obama responded that this is not the time to reduce fiscal stimulus.  Mr. Cameron’s riposte was that the U.K. was in the same category as Greece when it came to the government budget deficit as a percentage of GDP.

I’ve argued elsewhere[1] that the U.S. fiscal stimulus package took way too long to start the actual spending.  And in the same articles I noted that there’s a lot more to fiscal policy than government spending, taxes, and transfer payments.  Indeed, it’s becoming apparent that the regulatory environment (current and expected future) has a potentially larger impact than any traditional fiscal policy tools.  (Of course, all economists know this.  When you make something more costly, people and businesses will do less of it.  And when you increase uncertainty about  the future, people and businesses will postpone major decisions.)

But I have to agree with Mr. Obama and Dr. Krugman on one issue.  This is no time to engage in contractionary fiscal policy.  Cuts in government spending, cuts in transfer payments, or tax increases should all be off the table for the next six months.

Of course, that’s another reason for the sluggish U.S. recovery.  Many of the Bush tax cuts expire at the end of this year.  The Obama administration appears to have no desire to extend them.  Anticipating tax increases on January 1, individuals and businesses are taking actions this year to avoid higher taxes next year.[2]

Back to the issue at hand.  How do various countries stack up on government debt and the government budget deficit?

Debt as a Percentage of GDP

Using data from the International Monetary Fund’s World Outlook database,[3] we can find out the government debt as a percentage of GDP for many countries.  One curious exception is Greece, a country of great interest lately.  I approximated the government debt by adding up the Greek government budget deficits from 1980 – 2009.  While I could have found more and/or better data, this is good enough for blogging.  The graph below tells the tale. 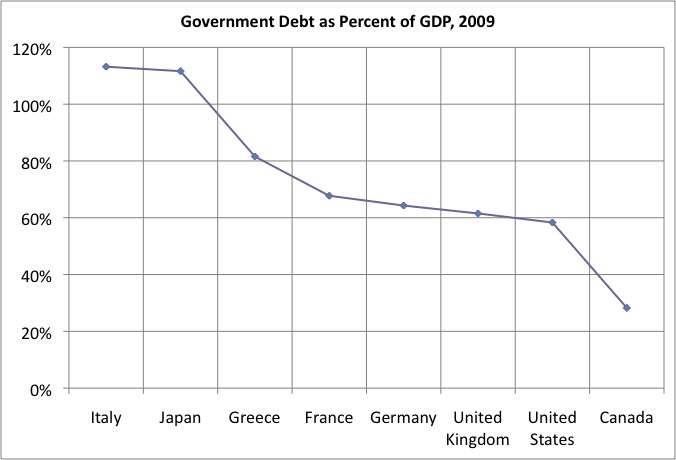 Government debt as a percentage of GDP, 2009

Mr. Cameron’s remarks, however, explicitly used deficit as a percentage of GDP, not debt.  And with good reason.  It’s clear that Italy, Japan, and Greece are in a different universe from the U.S. and the U.K.[4]

Deficit as a Percentage of GDP

Looking instead at the government budget deficit relative to GDP we can see what Mr. Cameron is talking about: 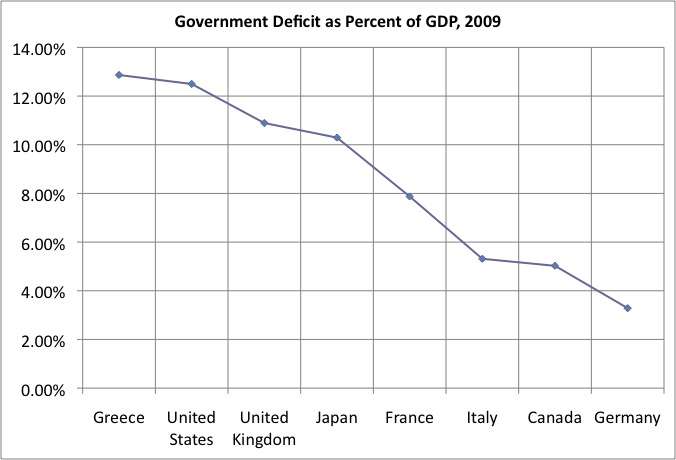 Government Budget Deficit as a Percentage of GDP, 2009

Actually, Mr. Cameron is guilty of overstating the case somewhat.  The U.K. government deficit is around 11 percent of GDP, significantly less than either Greece or the U.S.

What Does It All Mean?

Let me repeat my original point:  a recession is no time to worry about government budget deficits or the government debt.  Mr. Cameron has stated that he wants to reduce the size of the British government by 25 percent in three years.  Fine – but make it four years, not three, and postpone the start for a year.

Somewhere, John Maynard Keynes (a loyal British citizen) is spinning in his grave.

[2] If you have any capital gains that are taxable, 2010 is the year to realize them.  I’ve sold quite a bit of stock this year, in part because I expect to have to pay a lot more in capital gains taxes next year.

[4] Remember, the figure for Greek government debt is almost certainly too low.