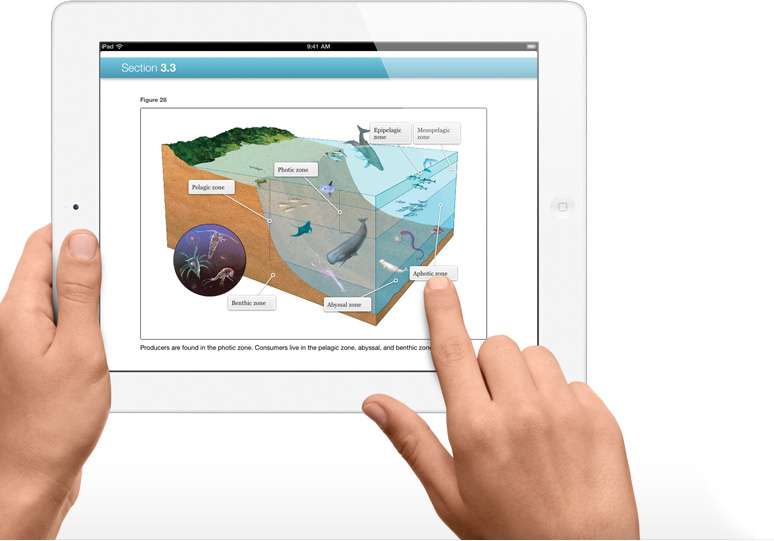 Apple has decided to move into the textbook publishing market.  The platform will, of course, be iOS devices, primarily the iPad.  Students will be able to search the textbook, add notes, and use hyperlinks.  Those are all nice features, but not particularly new. The pricing is low.  In fact, Apple has stated that they would like a number of textbooks to carry a price of zero.   Most critics have focused on the EULA which essentially says that if you sell something you’ve written through the Apple store, you give Apple the exclusive right to distribute that content.  The purpose of this blog entry is to point out some potential issues not addressed by other critics.

I have a rather unique perspective on this whole situation.  I’ve worked on any number of textbook projects over the years including Aplia’s online platform (now part of Cengage, Thompson, South-Western, or whatever name they’re using this year).  I’ve written instructor’s manuals for several textbooks, including four consecutive editions of Principles of Economics by Karl Case, Ray Fair and Sharon Oster.  I’ve written countless reviews, online study guides, and participated in focus groups.  I’ve also taught information economics several times and am pretty sure I know something about information goods.  And, of course, I’ve been teaching university economics for over three decades.

Here’s what I’ve learned.  Writing a good textbook is a lot of work.  A whole lot of work.  And writing the textbook is only the first step.  There are instructor’s guides, the solutions manual for the end-of-chapter questions, PowerPoint slides, test-banks, a companion web site, and inevitable comments from reviewers and editors.  In some respects writing a textbook is closer to writing a screenplay than writing a book.  There are so many people with the textbook equivalent of “notes” that I’m amazed the authors can keep track of it all.  Anyone who thinks that writing a textbook means converting lecture notes into a book format is just plain wrong.

Which brings me to some of the most troubling parts of Apple’s proposal.  The intent of the platform is to facilitate collaborative learning, allowing teachers and perhaps even students to alter the course materials to suit their style.  That will work well in English, art, and other subjects in which the content is, shall we say, fluid.  But in other subjects — physics, chemistry, and even economics — there is a fairly standard set of ideas that must be taught, especially at the principles level. For those subjects, collaborative learning has serious limitations.

I speak as one who tried the Socratic method when I first began teaching.  It worked well, until I realized that I had only 36.67 hours of actual class time.  What I could cover in an hour of lecture took two or three times as long using discussion.  This is also the reason experimental learning hasn’t caught on in economics, despite the availability of some excellent materials.  It just takes two darn long to complete the experiment, with no guarantee that the students are taking away the correct lessons.  (Yes, I have tried economic experiments in class.) 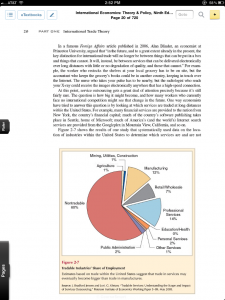 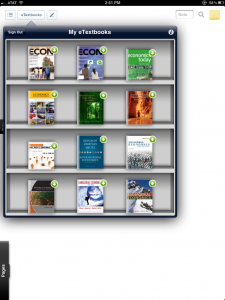 Textbooks, especially electronic textbooks, present the usual problems of information goods.  Marginal cost of distributing one more copy is virtually zero.  Efficiency implies price equals marginal cost, setting the price at zero.  But at a price of zero no one will write good textbooks.  Existing competition, particularly CourseSmart.com, is pretty darn good.  Coursesmart allows students and teachers access to electronic versions of many textbooks over the web.  Pricing for a student 180 day license for a textbook is half the suggested retail price.  I’ve added some screen shots so you can see what Coursesmart looks like.  One further advantage: Coursesmart mobile apps are available for iPad, iPhone, Kindle Fire, and Android devices.  iTextbooks are unlikely to be available for non-iOS devices any time soon.

We can see this today in the blogosphere, newspapers, and magazines.  The quality of writing has deteriorated incredibly over the last ten years.  To an economist, this is just a reflection of the principle of diminishing returns.  As more and more people are writing, we expect marginal productivity (quality corrected) to decline precipitously.  And so it is.  To a certain extent, bad writing has driven out good writing simply because there is so much bad writing out there.  It doesn’t help that bad writers will often do their writing at a very low price, perhaps zero.  Consider, for example, the recent acquisition of the Huffington Post by AOL.  Arianna Huffington walked away with $315 million, while her army of volunteer writers ended up with nothing.

Apple, of course, cannot tell authors the price to set for their work.  Apple will take a 30% cut off the top and demand exclusive distribution rights.  This will, of course, encourage teachers to engage in the worst form of conflict-of-interest behavior: writing material for a course, then selling that material to students. Monopoly pricing will undoubtedly occur in some cases.  Where’s the efficiency gain again?

So, in a nutshell, if Apple really expects to hand out e-texts at a price of zero, they must not be expecting much in the way of good content. There are powerful incentives for monopoly pricing and badly-prepared materials. There are a number of subject areas in which excessive instructor and/or student editing of the material could be detrimental to the material that needs to be learned. And many authors of good textbooks are likely to abandon the market entirely.  Is that really the future of education we want? 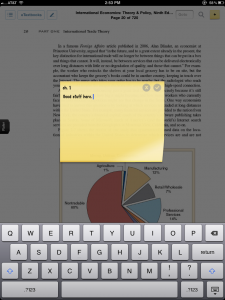 2 Replies to “Apple Moves Into Textbooks”