This morning’s lesson is venture capitalism for dummies.  I was prompted to write about this by a story on KQED’s California Report this morning.  Here’s the summary from the KQED website:

“Recent successes in raising money on the Internet are making “crowdfunding” look like a real alternative to the old ways of bringing in startup money. Entrepreneurs are now promising products not even made yet in exchange for financial backing. But it’s not clear what happens to the money if, and when, entrepreneurs fail to deliver.Reporter: Aarti Shahani”

Here’s a clue: the money is gone.  It was spent supporting the developer while the product was being developed.  Some may also have gone to buying software, hardware, and/or a host of other “parts.”  Kickstarter makes this quite clear on their FAQ pages 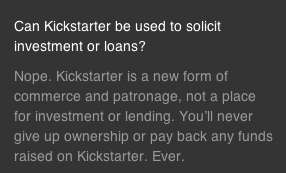 :Got that?  You ain’t getting any money back.  Venture capitalists understand that they are in a high-risk business.  They make profits by carefully analyzing proposals and funding those that they believe have a reasonable probability of success.  People who don’t understand this (including, apparently, the entire staff of KQED radio) should stay away.

As an added note, KQED is San Francisco’s public radio station.  For a city that hosts companies like Twitter and Foursquare, reporting like this is a disgrace.