I’ve written before about the deficit and the debt.  Today’s post will be about the current state of the U.S. government budget.  Along the way I’ll tell a story I heard from my thesis advisor in graduate school that is very relevant today.

Many people mistakenly believe the U.S. government budget deficit has grown smaller under President Obama.  Those folks use numerical and/or statistical chicanery to get the results they want.  The most recent example is on Twitter where someone tried to use the change in the deficit as proof that the deficit had not increased under the current administration. This tweet, by the appropriately named Morally Bankrupt, included a link to the graph: 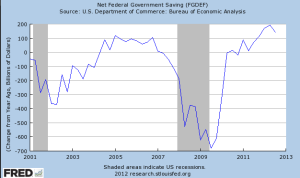 Only one problem there: the vertical axis in that graph:

Frankly, it’s amazing to me how little many people understand about basic numbers.  Not statistics, just the difference among three things:

If I was in charge of the U.S., those who did not understand simple ideas like this would not be allowed to vote.  But, for better or (more likely) worse, I’m not the emperor (yet).

Looking At The Correct Data

U.S. government budget statistics are assembled by the Bureau of Economic Analysis (BEA) in the Department of Commerce (DOC).  These folks are very technical and deal with issues that mystify most people.  I offer the example of chain-weighted price and output measures.  It took me some careful reading and quite a few examples to figure out what chain weighting is all about.  (If you’re not comfortable with geometric averaging, you should probably stay away from it.)  There are many, many other areas that I find deadly dull.  But I also realize how important the research is to accurately measuring what’s going on in the economy.  The professionals at BEA have my utmost respect. 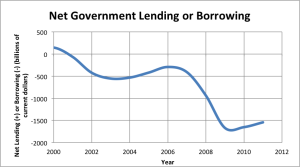 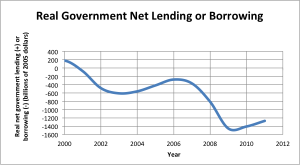 As always, my data is transparent and readily available in an Excel 2011 workbook by clicking here.  (Excel 2011 is for the Mac.  However, the .xlsx file should be readable by almost any version of Excel later than 98.  If you have problems with it, e-mail me and let me know what format you want.  No charge for this service unless you ask for something like Quattro Pro.)

Back in the 1970s I was in graduate school at Stanford.  One of my professors (later my dissertation adviser) was Karen Johnson.  She taught monetary theory and, frankly, I learned a lot about both the theory and teaching from her.  At one point, she made the following comment.  (Naturally 35 years later, the following is paraphrased.)

Suppose the U.S. government is running a budget deficit, but the economy remains in a recession.  The government runs a larger deficit.  Assume that doesn’t solve the problem either.  What should the government do next?  They’re already borrowing at an incredible rate.  Can they really spend and borrow even more?

Prof. Johnson was and is very, very smart.  Today the U.S. is in exactly the position she describes.  The government has managed to spend a pile of our tax dollars (both current and future).  Yet the economy remains stuck in a recession (or something very close to it — read this and this for my earlier comments).  And now the government is in a pickle.  They cannot continue to borrow at the current rate.  The national debt is over 100 percent of U.S. GDP putting us in the esteemed company of Greece and Italy.  But cutting spending and/or increasing taxes will be deflationary and make the economic situation even worse.  Personally, I believe that the short-term pain of a deeper recession is worth the long-term gain of stabilizing government borrowing.  Your opinion may be different — and I will fully support your right to proclaim that opinion.  But the current path is not sustainable.

Technical Note: Using BEA Data and a Note on FRED

http://bea.gov/iTable/iTable.cfm?ReqID=9&step=1 is a link to an interactive data page that will let you select different variables, time period, and frequencies.  Use the Options button to change the time period and frequency: 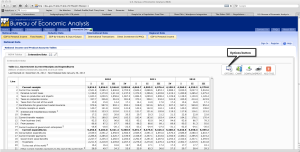 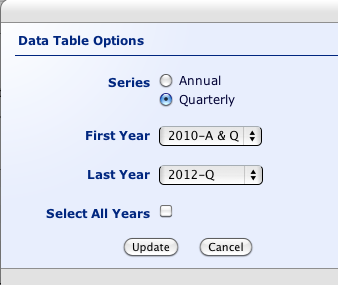 BEA data is available for download in Excel 2003, csv, and pdf formats.  Why anyone would choose pdf is a mystery to me, but maybe some people are in the business of publishing tables.

FRED is a long-running database housed at the Federal Reserve Bank of St. Louis.  I’ve used FRED many times in the past, but in recent months I’ve noticed a disturbing trend.  Some FRED data does not seem to correspond to the data at the original source.  My three main sources are BEA, the Bureau of Labor Statistics, and the Census Department.  FRED gives access to much of this data from a single source.  They have an add-in for Excel that lets you download and update data quickly and easily from inside Excel.  But I’ve also encountered problems with the FRED add-in working with Excel 2011 for the Mac.

It’s usually a mistake to challenge economists to a duel over data.  We know where the data is, how to download it, and what it means.  Unless you have your economist union card, you are advised to avoid such encounters.  (An economist union card is a Ph.D. in economics.)

2 Replies to “The Deficit and the Debt”