“We called it the Sunny von Bülow bill. These companies that should have been dead were being put on machines and kept alive for another few years,” said Jonathan Bush, co-founder of the cloud-based firm Athenahealth and a first cousin to former President George W. Bush. “The biggest players drew this incredible huddle around the rule-makers and the rules are ridiculously favorable to these companies and ridiculously unfavorable to society.”

Part of the American Recovery and Redevelopment Act (ARRA) was incentives for the health care industry to switch to electronic medical records.  A recent New York Times article (Feb. 19, 2013) looked at what went into this $19 billion pie.  They concluded that the health care shift to electronics medical records led to rent-seeking behavior by the “big three” suppliers of electronic medical records. The three companies were  Cerner Corp., Allscripts and Epic Systems of Verona, Wis. The three lobbied heavily to have the $19 billion included in the bill.  And, of course, the requirements for suppliers were oriented toward systems produced by these three.  No problem?  Oh, wait, these companies are old and produce what should be legacy systems.  I’ve written before about Jonathan Bush of Athenahealthcare.  Here’s what he has to say about this clause in ARRA →

The records systems sold by the biggest vendors have their fans, who argue that, among other things, the systems ease prescribing medications electronically. But these systems also have many critics, who contend that they can be difficult to use, cannot share patient information with other systems and are sometimes adding hours to the time physicians spend documenting patient care.

“On a really good day, you might be able to call the system mediocre, but most of the time, it’s lousy,” said Michael Callaham, the chairman of the department of emergency medicine at the University of California, San Francisco Medical Center, which eight months ago turned on its $160 million digital records system from Epic. Michael Blum, the hospital’s chief medical information officer, said a majority of doctors there like the Epic system.

And, naturally, all that rent-seeking paid off:

Four years later, in December 2008, H. Stephen Lieber, chief executive of the group, wrote an open letter to President-elect Obama calling for a minimum government investment of $25 billion to help hospitals and physicians adopt electronic records. The industry ultimately got at least $19 billion in federal and state money.

In the months after that windfall arrived, sales climbed for leading vendors as hospitals and physicians scrambled to buy systems to meet tight timetables to collect the incentive dollars. At Allscripts, Mr. Tullman soon announced what looked like a game-changing deal: the acquisition of another records company, Eclipsys, for $1.3 billion.

“We are at the beginning of what we believe will be the fastest transformation of any industry in U.S. history,” Mr. Tullman said when the deal was announced.

Last spring, some of the Eclipsys board members left after a power struggle; Mr. Tullman left in December. He is now at a company he co-founded that focuses on solar energy — another area that, after Obama administration and Congress expanded government incentives in the 2009 stimulus bill, has been swept by a gold-rush mentality, too.

But Has It Paid Off For the Stockholders?

As a good economist, I believe that corporations should act in the best interests of their owners, the stockholders.  And it appears that Cerner has done pretty well.  Let’s look at stock prices and financial summaries. It happens, however, that Epic is privately owned.  No financials from them. If you’re looking for information about them, their name is just Epic, not Epic Systems as they are called in the Times article. (Those who want the financial statements as Excel workbooks should click here to download a zip file containing three workbooks. Also, data and charts shown in this section are from Yahoo Finance.) 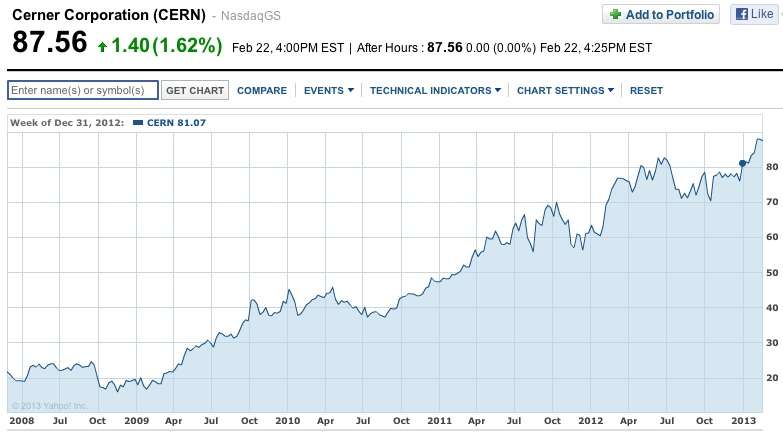 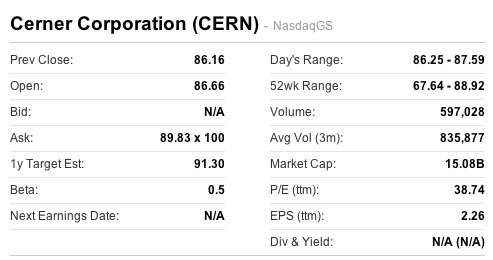 They’ve done OK. But Allscripts is another matter: 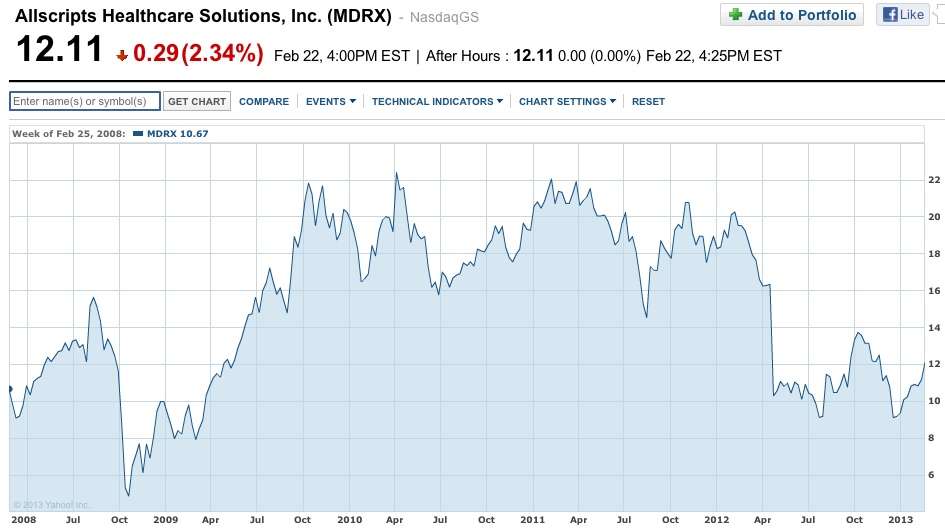 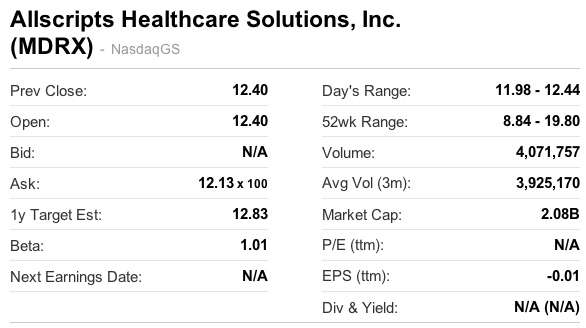 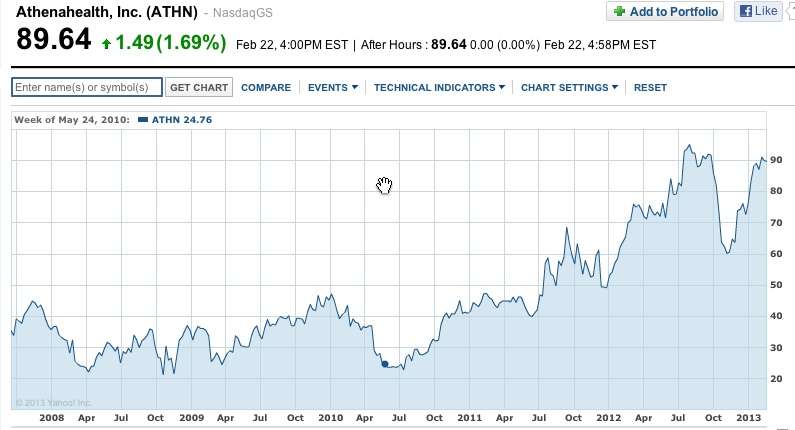 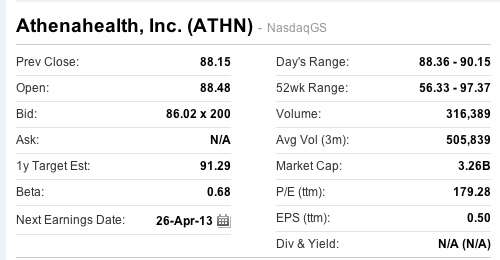 Economists know that companies engage in rent-seeking behavior because it increases their profits.  But apparently that can’t compensate for bad management (see the earlier material about Allscripts).  Are electronic medical records a good idea? Probably.  Should the federal government have kicked in $19 billion to encourage medical care providers to purchase, install, and train their employees on these systems?  That sort of subsidy inevitably leads to inefficiencies.  In this case, systems are being installed that use out of date technology, some medical care providers are switching to electronic records before they are ready (to take advantage of the subsidies and tax breaks), and newer companies such as Athenahealth, face new barriers to entry.  All of this is cause by the government picking winners.  We’ve seen too many examples to count showing why government does a bad job at picking winners.  Those who are skilled at lobbying government are unlikely to also be good at managing a company.