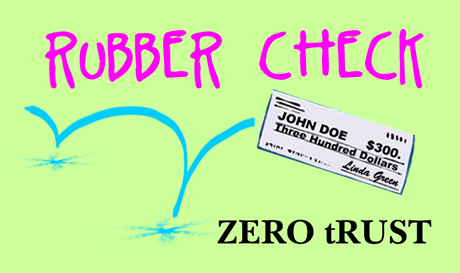 JPMorgan says a negative report in ChexSystems will rarely bar someone from obtaining an account. Others, like Bank of America, Citibank and Wells Fargo, say they use the information carefully, distinguishing between people who have made mistakes and those who have a history of fraud. Some banks have introduced second-chance checking accounts for people who do not qualify for traditional bank accounts.

On July 30 the New York Times ran an article with the provocative title “Over a Million Are Denied Bank Accounts for Past Errors.”  According to this story 10 million Americans do not have a bank account.  Apparently about ten percent of this total has been caused by, “Mistakes like a bounced check or a small overdraft have effectively blacklisted more than a million low-income Americans from the mainstream financial system for as long as seven years as a result of little-known private databases that are used by the nation’s major banks.”

Note first that the blacklist is not limited to “small overdrafts.” Here’s what the banks say →

Suddenly this is a problem.  Are you unable to open a checking account?  You may thank the government (as well as the media, particularly the New York Times). The two have waged a war against overdraft fees for the last decade.  There have been many new regulations and actions designed to increase the cost and reduce the revenue banks receive from overdraft fees.  Any economist can tell you that when you put a price ceiling in place, a shortage will develop.  In this case, the shortage is expressed as fewer bank accounts being opened, particularly for people likely to re-bounce (a term I just invented).

One way this war on overdraft fees has manifested itself is the details of check clearing.  Some banks apparently had a policy of clearing the largest checks first.  If one of those checks put the checking account in the red, an overdraft fee would be charged for each of the subsequent smaller checks.

Here’s an example.  You have $1,000 in your checking account.  There are ten checks being cleared.  One is for $900 and the other nine are for $20 each.  If the bank clears the $900 check first, there will be $100 left in your account, enough to cover five of the $20 checks.  The remaining four $20 checks will bounce, generating total overdraft fees of 4 times the per-check fee.  For convenience, let’s say the per-check fee is $25.  This check-clearing procedure will generate $100 in revenue for the bank.

Right to Opt Out.  The proposal would prohibit banks from imposing a fee for paying an overdraft unless the bank has provided the consumer with an opportunity to opt out of the payment of overdrafts and the consumer has not done so. The opt-out right would apply to all transaction types. Banks also would be required to provide consumers a partial opt-out for overdrafts resulting from ATM and point-of-sale transactions.

Debit Holds.  The proposal would prohibit banks from imposing a fee when the account is overdrawn solely because a hold was placed on funds in the consumer’s deposit account. This can occur where the final dollar amount of the transaction was not known in advance (for example, when a consumer purchases fuel at the pump, a hold is placed for the estimated amount of fuel that will be purchased).

The proposal would also amend Regulation DD to complement the proposed amendments to Regulation AA, including the following:

Disclosure of Aggregate Overdraft Fees.  The proposal would extend to all banks and savings associations the requirement to disclose on periodic statements the aggregate dollar amounts charged for overdraft fees and for returned item fees (for the month and the year-to-date).  Currently, only institutions that promote or advertise the payment of overdrafts must disclose aggregate amounts.

Disclosure of Balance Information.  The proposal would require banks and savings associations that provide account balance information through an automated system to disclose the amount of the consumer’s funds available for immediate use or withdrawal, without including additional funds the institution may provide to cover overdrafts.

Some days I seriously doubt that the folks in Washington and the media will ever understand basic economics.  This stuff is not hard, but it does require critical thinking skills that sadly seem to be lacking in much of the U.S. population.