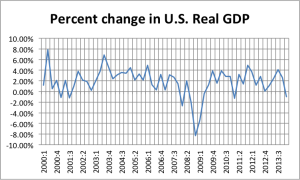 The Bureau of Economic Analysis announced that, according to the second estimate, real GDP fell by one full percentage point in the first quarter. That was revised down from the first estimate of -0.1%. Many in the media are having trouble reconciling these numbers with, say, the falling unemployment rate. In the interest of education, I offer my take on what really happened in the first quarter — and what did not happen. (And, in the pursuit of education, I am violating my rule against using government data. This is, hopefully, a rare exception.)

When I started writing this, I thought I knew why real GDP fell in the first quarter. It turns out my guess was wrong — but, believe me, that’s not good news at all. I’m going to walk you through my hypothesis, then point out why it’s wrong. Then I’ll deliver the really, really bad news.

Gross domestic product is the dollar value of all goods and services produced in a country during a year. Since GDP uses current prices to value the goods and services, we would like to know how much of a change in GDP was caused by increases in actual output (Y) and how much was the result of a higher price level (inflation, P). This rule must hold at all times:

Economists usually focus on real GDP because it’s changes in output that cause employment to change. For convenience, let’s use a simple model that I’ve used in my classes over the years. Real GDP is still Y but we now break it into two parts: the number of workers (L) and the productivity of each worker (W). Productivity is simply output per worker (Y/L) so this equation must also hold at all times:

What Causes the Unemployment Rate to Fall?

Consider, now, the second and third quarters of 2013. Here’s some data:

Unfortunately this does not account for what happened in the first quarter of 2014. Employment rose by a respectable 1.238 million and the number unemployed fell by about 600 thousand. The labor force also increased by about 900 thousand. (All data is contained in the Excel 2007 workbook. Before you change anything in that workbook, be sure to read the NotesSources tab as it describes the relationships among the worksheets.

What About the Weather?

Many economists (who should know better) blame the bad weather in the first quarter.  As is often the case, there was snow, ice, storms, and sundry other weather-related events.  Here in the greater Silicon Valley area we had two months of freezing temperatures overnight.  For better or worse, those two months were from mid-October to mid-December, 2013.  Except for a serious drought, the weather has been very nice so far in 2014.

Here’s the problem.  The weather gets bad every winter in most of the U.S.  At least the continental U.S.  (Hawai’i, as far as I can tell, never has bad weather.  And Alaska speaks for itself.)  GDP data are seasonally adjusted.  That means the reported figures already assume a bad winter and are corrected to compensate for it.  The only way weather could cause a drop in GDP is if the weather was worse than usual.  I’m skeptical about that, but would love to hear from meteorologists.

The Bad News: What Really Happened in the First Quarter

Better sit down. This is bad. The reason GDP fell in the first quarter was a precipitous decline in business investment and exports. You don’t have to believe in the neo-Keynesian multiplier to realize that this is very, very bad. (If you do believe in the multiplier, you will recognize investment and exports as two of the elements of autonomous spending. That means a change in either has a multiplied impact on the economy. And that multiplied effect will impact real GDP over the next few quarters. Those hoping for a rebound will be disappointed. This is the beginning of a new recession. (For some of us, it’s a continuation of the Great Recession.)

“But,” the pundits say, “wasn’t that all caused by a decrease in inventories?” If only. The change in gross private domestic investment was −$80.9 billion. Inventories were −$62.7 billion. But business fixed investment — plant, equipment, office buildings, warehouses, and other hardware — fell by $14.8 billion. In fact, the only category of gross private domestic investment that rose was “Intellectual property products,” a category recently added to U.S. national income accounts to make the GDP numbers larger more adequately account for this important segment of the U.S. economy. Excluding that increase, the decline in physical capital investment was −$88.8 billion.

Exports fared no better. Total exports declined by $36.1 billion. A decrease in exports of goods of $36.5 billion was slightly offset by a $5.1 billion increase in services exports. 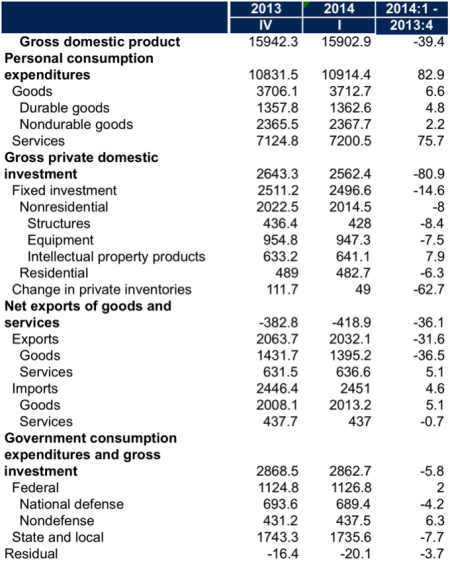 What Is Gross Private Domestic Investment?

When economists talk about “investment” we usually mean physical capital: factories, machines, office buildings, warehouses, and other stuff you can touch and feel. The sole exception is intellectual property products.

The net change in business inventories is literally goods that have been produced but not yet sold. Naturally, only companies producing goods can worry about inventories. A decrease in inventories can be caused by two factors.

We need to divide inventory change into two parts: planned and unplanned. Businesses often change inventory levels to accommodate expected future changes in sales. The best example is Christmas. Starting in August, many companies begin to “fill the pipeline” with goods they expect to sell during the Christmas shopping season. These are planned inventory changes that are usually not very important. (One exception to this rule is businesses reducing inventories because they expect future demand to fall. This can lead to a self-fulfilling prophecy as businesses reduce inventories and cut production. The outcome is sometimes a lower growth rate in income and (possibly) a recession.

Unplanned inventory changes are caused by unexpected changes in demand. Consider a shoe manufacturer that I will call Brown Shoes. In July, Brown’s economist forecasts that the company will sell 12,000,000 pairs of shoes in August. Brown is currently producing 10,000,000 pairs per month, so they ramp up production.

So the question is whether the $62.7 billion decrease in inventories in 2014:1 is planned or unplanned. Consulting entrails, my astrologer, and (important) looking at the actual GDP numbers, my guess is that about $45 billion of that was unplanned. Demand was less than businesses were forecasting. Therefore they reduced investment and inventories. But the actual decrease in inventories was more than businesses had intended. Ergo, businesses will continue to reduce output.

A Digression on National Income Accounting

In brief, when adding up GDP the first step is to add total spending in the economy: consumer spending, business fixed investment spending (including IP), and government spending. We then add the net change in business inventories to account for the difference between domestic spending and domestic production. We add exports because those products are produced here but sold in other countries. Since they are not included in domestic spending, we must add exports because they are part of domestic production.

What about products produced in other countries but sold here? That BMW was made in Germany and, therefore, is part of Germany’s GDP. But it’s included in U.S. consumer spending. We need to subtract imports because they are included in domestic spending but are not part of domestic production.

The U.S. economy is in for a rough time in 2014. In large part this has been caused by the implementation of Obamacare, the Dodd-Frank financial reform act, and the flood of new regulations emanating from a plethora of U.S. government agencies. I’ll just mention the de facto war on coal being waged by the EPA and the broad use of “disparate impact analysis” in the Department of Labor.

The economy will not begin to improve until some of these anchors are lifted. The earliest that will happen is 2017. The outcome of the next presidential election will determine whether the U.S. economy continues to stagger along or it is freed from some of the onerous chains are removed.

U.S. Bureau of Labor Statistics, Labor Force Data accessed through the FRED database at the Federal Reserve Bank of St. Louis on May 29, 2014.

One Reply to “What Really Happened in the First Quarter”