What happened to GDP in the first quarter? The short answer is that I don’t know and neither does anyone else. I’ve done a bit of number-crunching and am left scratching my head. 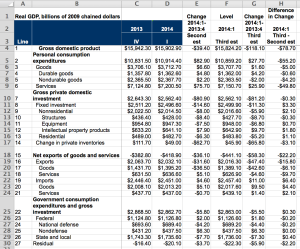 Simple Analysis of GDP (click the picture for a larger image)

And Column H is where my confusion begins. How is it possible that personal consumption expenditures fell by $55.2 billion between the second and third estimate? These figures should be relatively stable because estimates of consumer spending are based on data that is available relatively early in the estimation process. And most of this decrease is made up of consumer spending on services ($49.8 billion). This makes no sense at all.

And it gets worse. There are huge changes in gross private domestic fixed investment and nonresidential construction. Exports decreased by an additional $15.9 billion, about half the original change (Column E). Imports increased by 150% of the second estimate.

As always, the Excel workbook I used is available for downloading by clicking here.

Earlier this year I posted an article stating that I would not use government data until at least after the 2016 election. I’ve now violated that promise several times. But this data makes me suspect that even the Bureau of Economic Analysis is just making up numbers.