He’s been a valued member of our faculty and we appreciate his 14 years at Princeton.

“Is Paul Krugman leaving Princeton in quiet disgrace?”  That’s the headline over Ralph Benko’s column in the latest issue of Forbes.  And it’s a doozy of a story.  First, Mr. Benko notes the official statement from Princeton after the announcement of Prof. Krugman’s departure →

Mr. Benko characterizes this as “tepid.”  I’d say it’s more like, “So long, don’t forget to write.”  Long-time readers will recall that when Ben Bernanke retired as chairman of the Fed, I wrote that he had attached one condition to returning to Princeton:

Dr. Bernanke will be happy to return if the University will first fire Paul Krugman. 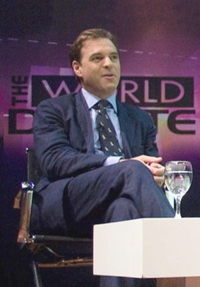 Dr. Bernanke appears to be quite happy in his semi-retirement.  I know that feeling well.  And I have to add that I made the above comment with humor in mind.  Now I’m not so sure.  And I will modestly claim to have called on Prof. Krugman to return his Nobel Prize over two years ago.

Mr. Benko is not exactly unbiased in this.  For one thing, he’s an opinion writer for Forbes.  In an earlier column he summarizes the case Prof. Niall Ferguson made against Prof. Krugman in a three-part series in the Huffington Post. (“Much Bigger Than The Shutdown: Niall Ferguson’s Public Flogging Of Paul Krugman,” Forbes, October 21, 2013.)  Among other inconvenient facts, Prof. Ferguson notes that this claim is blatantly false:

In his widely read New York Times column and blog,Krugman regularly boasts that he has been “right” about the crisis and its consequences. “I (and those of like mind),” he wrotein June last year, “have been right about everything.” Those who dare to disagree with him– myself included — he denounces as members of the “Always-Wrong Club.” Readers of his blog have just been treated to another such sneer.

That’s from Part 1 of Prof. Ferguson’s three-part Huffington Post series.  (Click as appropriate for Part 2 and Part 3.  There is also a coda by Prof. Ferguson at Project Syndicate.)

Prof. Ferguson then goes on to point out numerous incorrect forecasts made by Prof. Krugman.  These include:

But Prof. Ferguson saves his sharpest criticism for Krugman’s tone in all this.  Here’s a sample of the vitriol spewed by Krugman:

But far worse is what he has said about Prof. Ferguson. This is from Part 3 of the Huffington Post series:

On one occasion he implied that I was a racist and then called me a “whiner” when I objected. On another he referred to me as a “poseur”, adding for good measure that I had “choked on [my] own snark”. Last year he wildly accused of making “multiple errors and misrepresentations” in article for Newsweek, only one of which he ever specified. More recently I was accused of “trying to flush [my] own past statements down the memory hole” – a characteristically crude turn of phrase- and of being “inane”. Re-reading these, I can only marvel at the man’s hypocrisy, for Krugman often sanctimoniously denies that he “does ad hominem” – and once had the gall to accuse Joe Scarborough of making such an attack on him when Scarborough merely quoted Krugman’s own words back at him. For the record here is his own definition: “ad hominem attacks involve attacking the person in general rather than what the person has to say on a specific issue.”

Prof. Krugman responded, sort of, in another HuffPo article.

Mr. Benko goes on to quote another Princeton alumnus, one Paul Volcker.  Again, regular readers will be aware of my admiration for Mr. Volcker.  I regard him as one of the heroes of 20th century economic policy.  Here’s what Mr. Volcker asked a group of Princeton undergraduates:

The responsibility of the government is to have a stable currency. This kind of stuff that you’re being taught at Princeton disturbs me. Your teachers must be telling you that if you’ve got expected inflation, then everybody adjusts and then it’s OK. Is that what they’re telling you? Where did the question come from?

[I look forward to the day when economists will be] “humble, competent people, on a level with dentists.”

The answer is pretty clear.  That question came from Prof. Krugman. And it’s as wrong today as it was then.  The last words shall be from one of Prof. Krugman’s heroes, John Maynard Keynes (from Essays in Persuasion) →