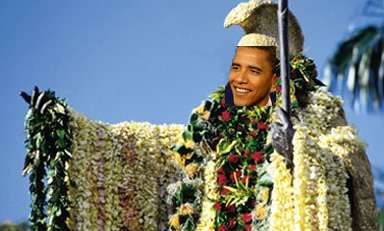 The President wants to cut Hawai’i loose. Redstate.com has uncovered a set of proposed rules that would, at best, allow “native Hawai’ians” to “establish a government-to-government relationship with the Native Hawaiian [sic] community?” Here’s their quote from the Department of the Interior’s Advance Notice of Proposed Rulemaking that does exactly what the failed legislation set out to do.

Again, from the Redstate article:

For at least the last ten years, two Democrat senators from Hawaii have tried to pass legislation—the Native Hawaiian Recognition Act—accomplishing this.  Congress has, correctly, declined to pass this, for many reasons, not the least of which is it would violate the 15th Amendment, and create a legalized racial class based not on treaties, but solely on blood heritage.

The Obamas have made no secret of their plans to move to Hawai’i after Barack leaves office in 2016. Is it possible that he is planning to become King KamehameObama? And what about taxes? If Hawai’i becomes a separate country (even in part) they can set their own taxes. Is this possible a tax dodge by the Obama family?

One of the reasons the legislation has failed in Congress is that no one has been able to produce a workable definition of a “native Hawai’ian.”  Centuries of genetic intermingling have reduced the number of 100 percent pure Hawai’ians to about 518,000 according to the Centers for Disease Control.  But that number is undoubtedly inflated because it is the result of self-reporting in a survey.  (The cited source is the U.S. Census.)  In fact, the number is probably very close to zero.

The Obama administration is trying to establish government-to-government relationships with a non-existent group that has no government.  Even for this administration, this is an amazing display of incompetence.