The second quarter GDP numbers are a puzzle for several different reasons:

Before going into the gruesome details, I’d like to thank Lisa Mataloni of the BEA for advising me about the “fourth estimate” of first quarter GDP. She also pointed me to this BEA document that describes the revision process. Here’s what she e-mailed:

Each summer, typically in July, we revised our estimates during our annual revision process. Additionally, every five years or so, we perform comprehensive revisions of our full history to benchmark to the quinquennial Economic Census.  Estimates are always subject to further revision as we obtain better source data or update or methodologies.

This is one of the many details I used to know. Sadly, it fell through the ever-expanding cracks in my ancient brain.

As I noted in my earlier article, the BEA’s News Release Archive is a treasure trove for macroeconomic data geeks. After my current exercise, I think I can claim membership in that elite group.[1]

I retrieved four sets of data for the first quarter of 2014: the advance, second, and third estimates plus the “fourth” estimate created by the annual revision. Next I calculated the growth rates of second quarter GDP using each of the four first quarter estimates. I then broke the overall growth rate into “contributions to GDP growth.” This is a BEA measure that is included in every GDP report (Table 2 in the press release dataset, Table 1.1.2 in the interactive database). It’s easy to calculate. Take the change in the component and divide it by the base GDP.

Thanks to our pal Mr. Excel, these calculations are fairly straightforward (but tedious). As always, I’ve uploaded the Excel workbook which you can get by clicking here. If you’d like a pdf version of the main worksheet click here. Or if you’d like all my Excel workbooks and the pdf file and, probably, a few other things, click here.

I split the pdf file into four pages. Let’s look at them one at a time.  (As always, click the image to see a larger version.) 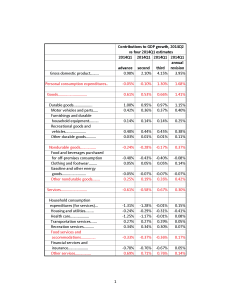 So where did the decline in first quarter GDP come from? Part of it was a decline in the estimates of personal consumption spending. While consumption declined, it decreased less than GDP. C decreased by 2.47% while GDP fell by 2.85% meaning C became a larger proportion of GDP between the advance and fourth estimates of first quarter national income.

Much of the growth in consumption’s share of GDP was caused by spending on goods. These are items you can touch. Some people have suggested that subprime auto loans drove an increase in spending on cars. Not according to the data which shows spending on motor vehicles and parts contributed a fairly stable 0.4% to GDP growth.

But the real item of concern is the change in business inventories (page 2 of the pdf file). 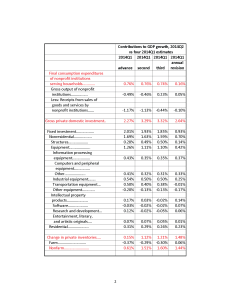 Boosting the estimated increase in the change in inventories contributed mightily to second quarter GDP. And 2.47% growth is quite a bit below 4%. As always, the central issue is how much of the growth in inventories was intentional and how much was unintentional. I don’t know, but consumer spending grew by 2.46% (using the fourth estimate for the first quarter). This is consistent with the average growth rate from 2000 – 2013 of 2.31%.

Inventories rose sharply but consumer spending was about average. My conclusion is that about half that inventory increase was unplanned. That means my best estimate of a realistic growth rate for 2014:Q2 is 3.21%. 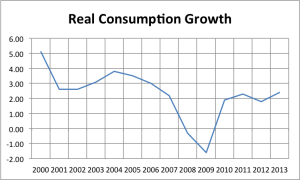 Some economists hyped the increase in exports. First, the highest level of exports in 2014:Q1 was the second estimate ($2.03 trillion). The advance estimate for 2014:Q2 is indeed higher, $2.07 trillion. But imports increased even more, from $2.47 to $2.54 trillion. Net exports, in fact, reduced GDP growth by 0.58 percentage points.

First quarter GDP was pretty good. I’ll only add that there are two more estimates to be released. BEA’s revisions have been pretty substantial in recent years. My guess — and it’s only a guess — is that the 4% growth rate will be revised downward over the next two months.