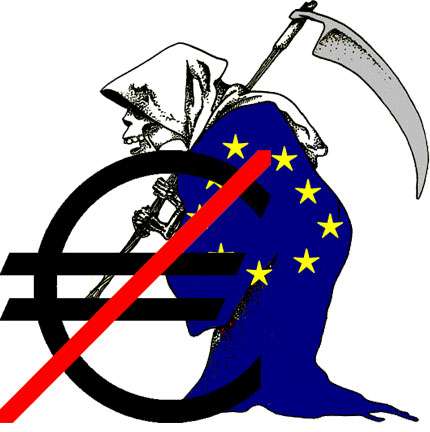 In May, 2012 I noted a proposal from Mr. Paul Feldman of Spencerville, MD. At that time there was a great deal of discussion about the possibility of GRexit, the possibility that Greece would exit the Eurozone. Mr. Feldman made the brilliant proposal that Germany should give up the euro instead, presumably restoring the Deutschemark as the national currency. His reasoning was that without Germany the other Eurozone countries would have to get their acts together since they could no longer depend on bailouts from Germany.

Naturally, I fully endorsed Mr. Feldman’s proposal for DExit. I also claimed credit, albeit a tiny amount, for inventing that word (tip: Deutschland). And, with that, the whole issue vanished.

Until today. “Marketplace” (American Public Media) included a story about Alternative for Deutschland (AfD), a new political party that wants to pull Germany out of the euro.

There’s a political tornado brewing in that country that could blow the euro off course and reignite the debt crisis. Germany’s newest political party – Alternative for Deutschland (AfD) – which wants to pull out of the single currency – is on the rise.

“I think we are becoming a real force in German politics, ” says party worker Friedrich Hilse. “ We have broken through into the European parliament, we have won seats in three regional assemblies, and we’re likely to get into the Bundestag (the German parliament) at the next election.”

Currently, AfD has about seven percent of the votes in Germany. But two factors make it worth noticing. First, AfD has come out of nowhere and grown rapidly. And second, the party’s appearance and appeal break the “German consensus” that more European integration is better.

Having said all that, I don’t forecast the Eurozone breaking up any time soon. But nationalism is on the rise across the continent. The AfD is yet another indication of this