“Experience keeps a dear school but fools will learn in no other.” – Benjamin Franklin

Just about every economics and finance course I teach includes a segment on exchange rate risk and how individuals expose themselves to this peril. In the latest episode, some Hungarian homeowners are learning a hard lesson. This article is exchange risk part 999 of a seemingly infinite parade of examples.

The November 14, 2014 New York Times features the regular “High and Low Finance” column by Floyd Norris. The headline reads “Borrowers in Hungary Learn Tough Lessons.” Apparently some of them took out mortgages denominated in Swiss francs. Others opted for euro-denominated loans. Neither is the domestic currency of Hungary. The Hungarian forint (Ft) has depreciated vis-à-vis both those currencies as well as the U.S. dollar.  That makes paying back the loan in foreign currency units more expensive with forints.

Avoid liabilities denominated in foreign currencies. While foreign-currency-denominated assets are also risky, the only risk is losing all or part of your personal wealth.  Liabilities can have catastrophic downsides as we will soon see.

When a currency depreciates, it takes more units of that currency to purchase one unit of foreign currency.[2] When the forint depreciated it took more forints to purchase other currencies, including Swiss francs and euros. Meaning repaying those mortgages got a whole lot more expensive in Hungarian domestic currency units.

Before going any further, here’s a lesson everyone should learn →

The implications are straightforward. Let’s use the example in Mr. Norris’s article.

Susanne Urogdi Kocsis, a 57-year-old Budapest resident, says she borrowed the equivalent of 7.4 million forints, or around $42,000, in 2007 to buy a larger apartment for her family. She says she has already paid back 4.5 million forints, “but the bank is asking for 11 million.” She thinks converting the loan to forints, as the government is forcing banks to do, will be of little help. “A lot of people won’t be able to pay back, and we will never be able to get new loans,” she said this week.

We need Hungarian mortgage interest rates.  I have real work to do, so I’ll settle for an approximation. According to Trading Economics the consumer interest rate in 2007 was 8.84%. Let’s construct the mortgage amortization worksheet. For convenience, I’ll assume the loan was made on January 1, 2008 and is a conventional 30-year fixed rate loan. I’ll also assume payments are constant in forints, but the loan balance is updated to reflect the exchange rate every month. According to my calculations (the last worksheet in the Excel workbook[1]), as of October 31, 2014 Ms. Kocsis’s loan balance was 14,162,849.57 Ft. While she had made payments of 4,866,012.26 Ft, the exchange rate depreciation had caused the balance on her loan (in forints) to double.

But it’s even worse. Assuming the current exchange rate remains the same, she will never pay off this mortgage. Her payment in Swiss francs is less than the monthly interest. Therefore, she is experiencing negative amortization in forints.

The charts below tell the story.[3] The forint has fallen through the floor. Against the Swiss franc, the forint fell 18.75% over the four-year period, 5.33% per year. Those who bet on the euro had a somewhat better fate. The forint depreciated 8.3% total, 2.2% per year. As always, my methods are transparent. Click here to download the usual Excel workbook. 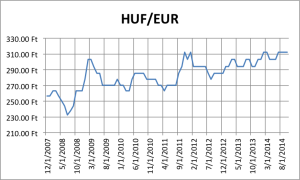 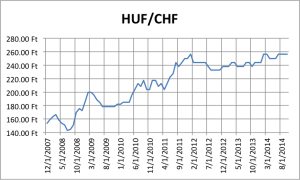 Twice in my memory ads have appeared offering 21% interest rates on government-insured deposits in Mexico. The ads do not tell you those accounts were denominated in pesos. The reason the interest rates were so high was expected inflation. When actual inflation caught up with expectations, the peso depreciated, leaving depositors with balances that were worth very little in dollars.

Sadly, this lesson apparently will continue to be learned the hard way. “Experience keeps a dear school but fools will learn in no other.” – Benjamin Franklin

[1] The mortgage worksheet is not completely accurate. I mistakenly made the first payment on January 1, 2008. In fact, that payment would be made on February 1, 2008. Sadly, I have other work to do and won’t bother making this correction. If anyone does, please share your work with me.

[2] Appreciation and depreciation usually refer to currency pairs, viz., the forint vis-à-vis the U.S. dollar. However, sometimes one “currency” is a weighted basket of currencies.