Late last year I wrote about global interest rates. I attempted to rationalize the eye-popping disparity between U.S. and foreign government bond interest rates. Today, doing some work for a class I’m teaching, I once again noticed something pretty amazing. U.S. ten year notes have a yield of 2.017%. Germany and Japan are in the vicinity of 0.3%. That will get anyone’s attention.[1] This is your global interest rate update. As always, my methods are transparent. Click here to download the Excel workbook (includes both monthly and annual data).

Before proceeding with the update, I must confess a minor error in my previous article. My equation for the default risk premium was much more complicated than necessary. I’ve corrected my mistake below.

So first let’s look at interest rate trends. For some reason, Japan’s data is only reported through October, 2014 in the OECD dataset. I’ll exclude that country just to keep the data comparable by using a single source.

Here are a few representative countries. As always, the yield to maturity shown is on the ten-year government note. I assume (hope?) that OECD has corrected for coupon payments in putting these numbers together. This time I have included only one eurozone country, Germany. 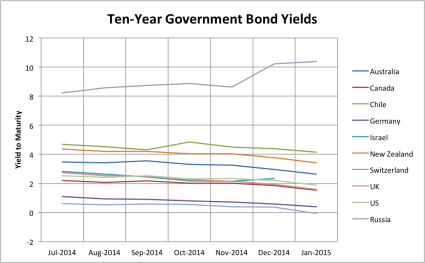 Notice something very interesting. The data falls into three rough groups. (Russia, the top line, is a special case.) The first group with interest rates around 4% includes Chile, New Zealand, and Australia. It’s fairly easy to understand why New Zealand and Australia might move together. A simple gravity model of trade will tell you these economies should be closely linked. But Chile? Is there a strange southern hemisphere effect? The data is there — I leave it to more intrepid researchers to figure this out.

The second group consists of Israel, the U.K., the U.S., and Canada. These four countries are linked by a shared language and historical ties. And, of course, the U.S. and Canada have both the gravity model and NAFTA to encourage economic linkages.

The lowest two countries are Germany and Switzerland. In fact, in January, 2015, the yield on Swiss government bonds was -0.07%. This is the nominal rate. Savers are paying the Swiss government for the privilege of lending it money.

We can explain some of these interest rate differentials by using the uncovered interest parity (UIP) model: [2] 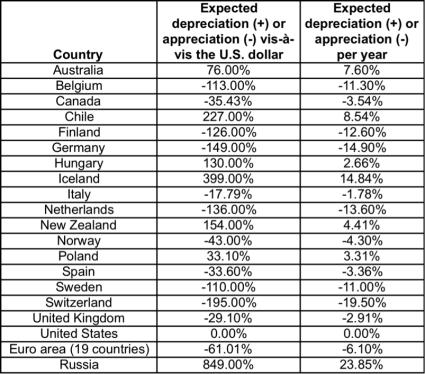 Currencies expected to appreciate sharply include the Swiss franc and the Swedish kronor. The eurozone countries are interesting: Belgium (−11.3%), Finland (−12.6%), Germany (−14.90%), the Netherlands (−13.60%) and Spain (−3.36%) all use the same currency. But the expected rates of depreciation are markedly different.

The only way to make sense of this is to introduce another variable: default risk. We can calculate the default risk premium as the difference between yields on government bonds issued by different governments but denominated in the same currency. 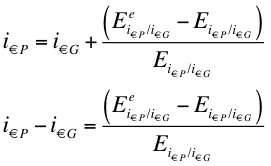 What, then, is the meaning of the expected change in the exchange rate, the term on the right side of the = sign? The Greek euro cannot depreciate against the German euro. In this case, we are measuring the default risk premium of the various countries.

To measure this I’ll use data from December, 2014 because all the eurozone countries have data reported for that month. Also note that we apparently need to change the acronym. Markets seem to think that Ireland has worked their problems out. But Slovenia is now in the mix. I propose PIGSS, mainly so I don’t have to change a bunch of subscripts in this article. 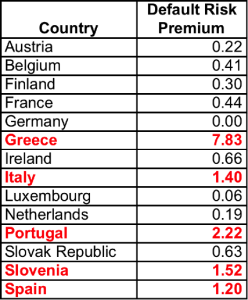 What’s really interesting about this list is that only Luxembourg approaches Germany’s level of stability. And France’s default risk premium is higher than you might expect for the second-largest economy in the eurozone.

Wasn’t that fun? I hope you’ve learned a bit about using data to learn something interesting.

[2] Material on UIP is based on chapter 4 from Robert C. Feenstra and Alan M. Taylor, International Macroeconomics (2012). Worth Publishers, New York. Disclaimer: I wrote the instructor’s resource guide for this textbook.

[3] It has become conventional to express exchange rates as units of home currency per unit of foreign currency. That means an increase in the exchange rate implies a depreciation of the home currency and vice-versa. This is only confusing the first 247 times you work with it. After that it’s simple.

[4] P stands for PIIGS, the five countries in the eurozone that have very risky government debt.