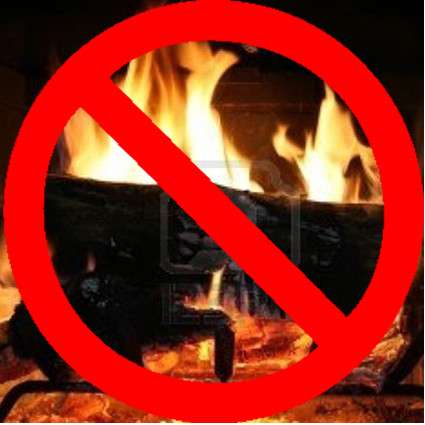 … nor shall private property be taken for public use, without just compensation.

The March 23 San Jose Mercury-News had a front-page article with a new proposal from the Bay Area Air Quality Management District (BAAQMD). This proposal is a direct violation of the “takings” clause of the U.S. Constitution. Specifically, the last clause of the fifth amendment says→

BAAQMD has proposed banning the sale or rental of privately-owned housing if said housing contains a wood-burning fireplace. In effect, BAAQMD wants to reduce the price of such houses to zero. They do offer an out: the owner can “upgrade” their fireplace(s) to burn natural gas at a cost of around $3,000 (presumably per fireplace, although there may be multi-fireplace discounts).

This is insane. The amount of pollution emitted by wood-burning fireplaces cannot possibly be that important.  But, even worse, BAAQMD does not know whether their drastic proposal will even reduce the quantity of wood smoke.  Read on for the depressing details.

Full disclosure: my lovely wife and I own two houses in the Bay Area.  Each has a wood-burning fireplace (although neither has been used for at least five years).

The San Francisco Bay Area is home to almost seven million residents and an estimated 1.4 million fireplaces and wood stoves. Wood smoke from these devices is the #1 source of wintertime air pollution.

I do not believe this — and neither should you. BAAQMD defines “pollution” in very specific ways. But note the specific qualifier: “source of wintertime air pollution.” Gee, maybe that’s because people are using fireplaces to stay warm! Even for current “spare the air” regulations, dwellings whose sole source of heat is burning wood are exempt. As far as I can tell, BAAQMD does not even try to locate the pollution sources. How many of the homes burning wood in fireplaces are exempt from their regulations? I don’t know.  And, at least as far as I can tell, neither does BAAQMD. A quick scan of their massive report shows a lot of concern for concentrations of various pollutants in different locations, but zero consideration of sources. Frankly, that’s stupid. BAAQMD cannot determine the effectiveness of their regulations until they know the percentage of current pollution emitted by exempt structures. Until then they are simply whistling in the dark.

I have to add that current regulations prohibit burning wood during “spare the air” days (common in the winter). The number of these days is directly related to meteorological conditions. More storms and more wind means fewer spare the air days. This year we had a rainy December, a dry January, and fairly dry February and March (so far). As you would predict, there were few spare the air days in December and many more in January, February, and March.

I look forward to BAAQMD actually using science instead of propaganda. But I’m not holding my breath.  Here’s what they should do for starters.

First, every scientist working for that agency (both employee and consultant) should be required to read and pass a test about chapters 3 and 16 of Tom Tietenberg and Lynne Lewis’s excellent textbook Environmental and Natural Resource Economics (9e, 2012, ISBN 978-0-13-139257-1, Addison-Wesley, a Pearson company).

Second, they should also read this study to see what a good methodology looks like.  This research was done in 1983.  Increases in computing power since then should allow expansion of sources from hundreds into millions (the number of houses and other dwellings in the Bay Area):

Here’s a summary from Tietenberg and Lewis (p. 68):

In order to compare compliance costs of meeting a predetermined ambient air quality standard in Chicago, Seskin, Anderson, and Reid (1983) gathered information on the cost of control for each of 797 stationary sources of nitrogen oxide emissions in the city of Chicago, along with measured air quality at 100 different locations within the city. The relationship between ambient air quality at those receptors and emissions from the 797 sources was then modeled using mathematical equations. Once these equations were estimated, the model was calibrated to ensure that it was capable of re-creating the actual situation in Chicago. Following successful calibration, this model was used to simulate what would happen if EPA were to take various regulatory actions.

The results indicated that a cost-effective strategy would cost less than one-tenth as much as the traditional approach to control and less than one-seventh as much as a more sophisticated version of the traditional approach. In absolute terms, moving to a more cost-effective policy was estimated to save more than $100 million annually in the Chicago area alone. In Chapters 15 and 16 we shall examine in detail the current movement toward cost-effective polices, a movement triggered in part by studies such as this one.

The word “science” is being thrown around a lot lately. What BAAQMD has done is, in fact, science. But they have not gathered enough of the correct data. Worse yet, they have done a completely inadequate benefit-cost analysis. Their utter failure to study the sources of pollutants means we cannot know whether their proposal will have any impact at all.