In his near-future novel Supersad True Love Story (Random House, 2011) Gary Shteyngart introduced the idea of a “northern euro” and a “southern euro.” Mr. Shteyngart has been correct on so many issues that he may need to update his resumé, changing his job description from “writer” to “futurist.”

Today saw another potential step in this progression. There is speculation that Greece will leave the euro zone but still use the euro as currency.

Money is anything that is widely accepted in exchange for goods and services in ordinary commercial transactions.

It’s important to have a good, working definition of “money.” One of my graduate fields was in monetary theory and I’ve taught money and banking many times. Here’s the definition I use →

For Greece, the relevant part of the definition is “widely accepted.” A Greek euro is not money outside Greece. That means the Greek euro is, de facto, a separate currency. Greece might as well just go back to the drachma. (Indeed, Twitter user joao called the currency the “euro-drachma.”)

Is Greece Blackmailing the ECB? 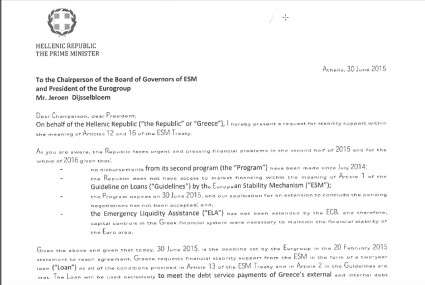 How Will the Euro-Drachma Be Implemented?

The speculation about creation of a euro-drachma began with this tweet from Megan McArdle (@asymmetricinfo):[2]

I don’t think ECB will force Greece out of euro; I think it will have to devalue if it wants to reopen its banks ever.

Yes, TARGET2 shutdown by the ECB will mean Greece has €-dramchas type of currency, not yet though

Yes, TARGET2 shutdown by the ECB will mean Greece has €-dramchas type of currency, not yet though

No, Greece will still use the € but can’t get the money out of Greece. TARGET2 gets shutdown.

So, effectively, Greece will have its own euro. (Interestingly, the ECB did much the same thing with Cyprus a few years ago.)

Joao was kind enough to supply some additional input (and a valuable web link). I have concatenated tweets per the “+” sign in the originals.

ECB has put a cap on TARGET2, as of this moment, it is in effect because Bank of Greece choose too obey ECB. There is nothing that says BoG has to obey the ECB and if the ECB decides to shutsdown TARGET2 for good, it will mean that BoG is now independent. It can still print €’s without ECB consent.

So there you have it.  The decision rests with Greece.  I doubt very strongly that the Greek central bank will actually print euros.  But, from a purely academic viewpoint, it would make for an, um, interesting situation.

For an interesting and mildly entertaining analysis, see Greece and the Art of Liquidity.

The ECB Weighs In

Les Echos interviewed Benoît Cœuré, Member of the Executive Board of the ECB. The interview was published on the ECB website on June 29.

Is Greece’s exit from the euro area now the most probable hypothesis?

Greece exiting the euro area, which used to be theoretical, can unfortunately no longer be ruled out. It’s the result of the Greek government choosing to end discussions with its creditors and resorting to a referendum, causing the Eurogroup not to prolong the second adjustment programme.

The ECB, like the other European authorities, wishes Greece to stay in the euro area. That’s the substance of the proposal made last week by the Commission, the IMF and the ECB in the form of a programme of reforms and a financing offer that is much more favourable than anything proposed in the past. Europe has never abandoned Greece.

In what way were these proposals more favourable?

They gave Greece the time and the freedom to reform its economy, for example its labour market, while envisaging a demanding budgetary path, but taking account of the deteriorating economic climate. The primary surplus requested was reduced to 1% of GDP in 2015, compared with 3% previously. We were also proposing larger cuts in military spending to create room for manœuvre elsewhere.

So does the responsibility for breaking off talks lie entirely with Greece?

The decision to interrupt discussions was taken by the Greek authorities. That also surprised us, for we were coming to the end of some quite focused and fruitful exchanges.

At this point, I am mystified as to why the Greeks want to stay in the eurozone. Now that they’ve been locked out of the interbank settlement system, there’s very little advantage to be gained from continuing on that path. Bring back the drachma!

[1] Banks named are for example purposes only. This does not imply any endorsement.

[2] In all tweets I have removed the Twitter handles of those mentioned in the message. If you’re curious you can follow the links to see the original tweet.