There’s a new book on the history of Bitcoin. Digital Gold by Nathaniel Popper covers the history and implications of the world’s most popular crypto-currency (Harper, $27.99, $19.01 at Amazon.com). While perusing the review in today’s Wall Street Journal I noticed something interesting. The country that uses Bitcoin the most is Argentina.[1] 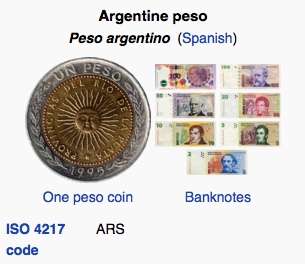 I thought perhaps I had stumbled on to a new idea. I was mistaken. The Economist and the New York Times have written about Bitcoin in Argentina during the past year (more or less). This article will first review the data. Next, I’ll excerpt the two articles from the media. As always, my data is transparent. Click here to download the Excel workbook.

Throughout this article I will use Bitcoin and bitcoin. Bitcoin refers to the name of the currency operation and its various adherents. By contrast, bitcoin means the currency itself. I know that’s confusing but it seems to be the stylistic convention in the media.

Argentinians should be concerned. Here’s what has happened to the peso vis-à-vis the dollar over the past five years: 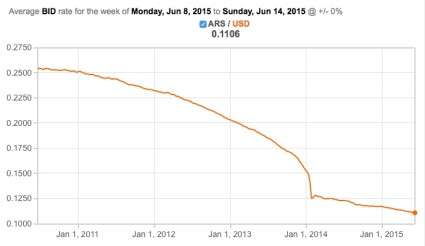 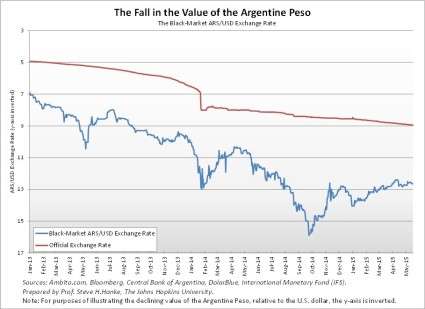 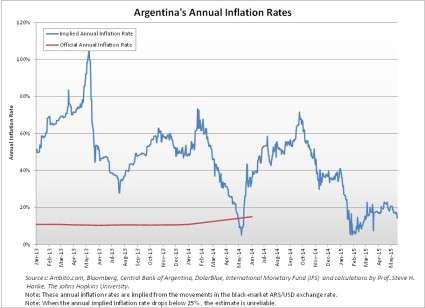 The annual depreciation of the peso using the black market exchange rate is 28.55% per year. And Prof. Hanke’s estimate of annualized inflation has been, with a very few exceptions, in double-digits since January, 2013. The high was over 100% per year in mid-2013, with other peaks of 70% in February and October, 2014.

Argentina’s economy, especially the monetary sector, is in big trouble.

Almost exactly one year ago, The Economist ran a story on the seemingly natural fit between Argentina (with its troubled monetary sector) and Bitcoin (currency with apparently no borders). The article explored the reasons for Bitcoin not taking hold faster. Here’s how the magazine describes the fit between the two:

ARGENTINA and Bitcoin would appear to be a match made in heaven. On the one side stands a country which since the second world war has suffered numerous bouts of inflation, and even hyperinflation–rising to as high as 20,000% in the late 1980s (see our recent briefing on the country). Things are better these days, but inflation is still expected to hit 38% by the end of the year.

On the other is a crypto-currency, backed by cold mathematics rather than a populist government. It is meant to provide protection against inflation. And it allows getting around the cepo, the set of legal restrictions put in place to prevent money from leaving the country. Legal purchase of dollars, for instance, is subject to fixed monthly limits at the exchange rate set by the government (usually 30-40% less than the black market rate). Credit-card transactions made outside Argentina incur a 35% surcharge.

The article goes on to explain that only 130 brick-and-mortar businesses accept Bitcoin.[3] The Argentina Bitcoin Foundation claimed between 15,000 and 20,000 Argentinians held bitcoins. The Economist identifies two main reasons Bitcoin has not taken off in Argentina:

The second problem actually appears to be an opportunity. Look at this map. The red arrow points to Buenos Aires, just across an inlet from Uruguay. Argentina also borders Brazil, Paraguay, Bolivia, and Chile. Some informal cross-border trade in banking services may be occurring. (If it’s not there is an entrepreneurial opportunity here for bankers in those countries. One additional complication: while the border between Argentina and Chile is very long, it appears to follow the crest of a mountain range.) 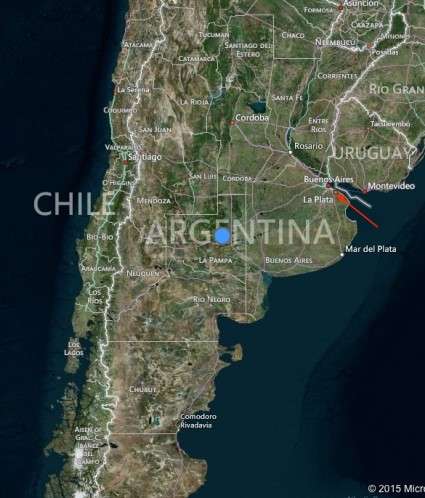 Yet the best indicator may be that the country’s central bank seems to be getting nervous. On May 27th it issued a statement discouraging the use of virtual currencies. These¸ the bank said, are not backed by the government, and are subject to wild fluctuations in price, among other terrors. It warned that “the risks associated with transactions involving the purchase or use of virtual coins as payment, are supported exclusively by their users.”

Nevertheless, even in 2014 there were signs the government was getting nervous. Again from The Economist →

When the central bankers are getting nervous you must be doing something right.

Added note: The Economist ran a long white paper about Argentina in the February 15, 2014 issue. This is highly recommended for anyone wanting more background.

Ten months later the New York Times published “Can Bitcoin Conquer Argentina?” (This is actually an excerpt from Digital Gold by Nathaniel Popper mentioned at the beginning of this article.) Despite the hyped headline, the article is really more of a sales pitch for Bitcoin. Nevertheless, parts are instructive. Unfortunately, the article is long on anecdotes and stories while being woefully short on actual data about Bitcoin use.

The story begins by describing a day in the life of Dante Castiglione, a black-market money trader. But his product is differentiated from others who simply accept pesos in exchange for hard currency (usually the good old U.S. dollar). Mr. Castiglione buys and sells bitcoins, often in exchange for U.S. dollars. This is, of course, the usual practice in countries with rapidly depreciating currencies and rampant inflation: a “hard” currency operates as a medium of exchange in parallel with the local currency. Bitcoins are not a medium of exchange because they are not widely accepted for goods and services. But they do have a market value and can be used to buy dollars, the hard currency in Argentina.

And bitcoins have several advantages over services like Paypal. There are no transaction fees. Transferring bitcoins to another member of the network is easy and fast. And, importantly, transaction records are not widely available.

In contrast, the best-known Bitcoin start-up in Argentina, BitPagos, is helping more than 200 hotels, both cheap and boutique, take credit-card payments from foreign tourists. The money brought to Argentina using Bitcoin circumvents the onerous government restrictions on receiving money from abroad. Castiglione has some hotel clients, but he says that many of his 800 or so registered customers are freelancers who use Bitcoin to get paid by overseas clients, or companies that want to move money in and out of Argentina. A popular new online retailer, Avalancha, began accepting Bitcoin last summer and has seen the volume of Bitcoin transactions grow steadily since then. Avalancha offers customers a 10 percent discount when they use the virtual currency, because accepting credit cards generally ends up costing Avalancha more than 10 percent as a result of the vagaries of the Argentine financial system. The Bitcoin community in Buenos Aires has been vibrant enough to produce what’s known as the Bitcoin Embassy in the center of the city, a four-story building that serves as the home to eight start-ups whose businesses depends on the Bitcoin network.

But, if you read long enough you’ll discover the story of Brenda Fernández.

One of Castiglione’s main competitors was another Bitcoin broker named Brenda Fernández. Originally from the Buenos Aires suburbs and a college dropout, she previously smuggled electronics into the country and sold them on the local equivalent of eBay. She talked in loud bursts, punctuated with high-pitched laughs, and proudly made provocative statements about breaking the law and ignoring standard business practices when I met her at an event at the Bitcoin Embassy. “I find a way to market myself as the crazy Bitcoin girl,” she told me.
…
[The author returns to Buenos Aires in February, 2015 after his first trip in June, 2014.]
…
Earlier that day, as I sat with Fernández in a Subway sandwich shop, which was her temporary office, chosen for its free Wi-Fi, she did not try to hide her difficulty in adapting to the more competitive environment with her “crazy Bitcoin girl” routine, which was making it hard to keep big customers. She did have one business in the United States that sent her about $5,000 worth of Bitcoins each month and had her exchange the money and deposit the pesos into the company’s Argentine bank account, in order to make payroll. But a lot of her customers were young people who wanted to buy a few hundred pesos worth of a Bitcoin so that they could pay online for a Netflix subscription or a video game. “The market moved in another direction,” she said, “and I didn’t move in that direction.” 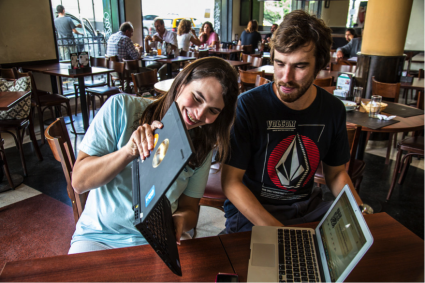 Apparently some businesses that use Bitcoin are big enough to care about the appearance and demeanor of their black-market currency exchange dealer. This appears to portend well for the future of the crypto-currency in Argentina. Moving into the mainstream is always a good sign.

Hard data is difficult to find for two reasons. First, Bitcoin is a crypto-currency. One of its purposes is to make transactions fairly anonymous. Second, data coming out of Argentina is very unreliable. Even the IMF has made statements about the likelihood of, um, “flawed” national income accounting procedures (emphasis added by me).

The Executive Board of the International Monetary Fund (IMF) met on June 3, 2015 to consider the Managing Director’s report on Argentina’s progress in implementing the third set of specified actions called for by the Executive Board in December 2013 to address the quality of the official data reported to the Fund for the Consumer Price Index (CPI) and Gross Domestic Product (GDP).

The Executive Board recognized the ongoing discussions with the Argentine authorities and their material progress in remedying the inaccurate provision of CPI and GDP statistics since 2013.

However, it determined that Argentina is not yet in full compliance with its obligation under Article VIII, Section 5 with respect to the accurate provision of CPI and GDP data to the Fund. It found that some specified actions called for by end-February 2015 had not yet been completely implemented.

There is one website devoted to Bitcoin research. CoinDesk.com offers the following anecdotal evidence about Argentina.

In an article from August 13, 2014, Pete Rizzo reports on a new source for obtaining bitcoins: 8,000 convenience stores:

BitPagos has launched Ripio, a new bitcoin brokerage service that allows consumers in Argentina to buy small amounts of bitcoin at more than 8,000 convenience stores.To achieve this goal, Ripio will integrate with TeleRecargas, a popular mobile phone service that allows consumers to prepay for cell phone plans at a network of partner convenience stores across Argentina.

Ripio will use Brazil-based bitcoin exchange Mercado Bitcoin to determine the price at which it sells bitcoin to consumers.

In other words, to avoid government interference consumers will use prepaid cell phones for their transactions. In addition, to maintain a somewhat stable exchange rate, →

The transactions will exchange bitcoins for Brazilian reals. This avoids the ongoing depreciation and instability in the Argentinian peso.

Bitcoin startups Volabit and SatoshiTango have opened a money transfer service between their respective countries through a collaboration called Coinnect.

Volabit framed the offering as a bitcoin-powered international money bridge for remittances and global commerce that will minimize the bitcoin learning curve.

Bitcoin is hidden from the Coinnect user experience. Those wanting to send money via Coinnect need only deal in their local currencies without worrying about bitcoin’s price volatility.

Finally, OmbuShop, a startup based in Argentina, wants to become the Shopify of South America. Or, for that matter, eBay, Amazon, and every other company that lets merchants set up storefronts. OmbuShop specializes in apparel and accessories. The company claims to have 2,000 merchants.

Bitcoin is making inroads in Argentina. Whether it can eventually become a significant part of the country’s purchasing power remains to be seen.

[1] The Argentine peso, along with Mexico, Hong Kong, Canada, and many other countries, uses $ as its currency symbol.

[3] Remember, this article is one year old.