1. The manhunt for Richard Matt and David Sweat has focused on a cabin in Mountain View, NY.

CADYVILLE – State police confirmed today that they matched DNA in items found in a Mountain View cabin to inmates who escaped from a nearly prison more than two weeks ago.

Maj. Charles Guess, commander of the state police Troop B, said this gives authorities reason to believe the convicted murderers were in that part of Franklin County as recently as Saturday and likely are still. An intense search continues there today for Richard Matt, 48, and David Sweat, 35, who cut their way out of Clinton Correctional Facility in Dannemora and were discovered missing on the morning of June 6.

KINGSLEY — A teacher in Susquehanna County is facing sex charges for improper contact with a student.

Megan Clough, 29, of Susquehanna was arraigned Friday on one count of institutional sexual assault. Investigators said Clough, a teacher at Mountain View High School, had sex with a male student. 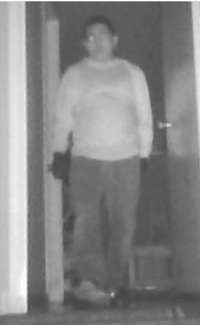 From the Mountain View Police Department:

On Friday, June 19, at around 9:13 p.m., an unknown suspect forcibly entered a home on the 1100 block of Sladky Avenue. The suspect (pictured here) stole both U.S. and foreign currency along with a camera.

If you have any information about this individual, please contact Detective Andrew Wong at 650-903-6344 and refer to case number 15-3381.

The Buffalo City Council, at their last meeting, approved on third and final reading an Ordinance vacating an an alleyway in the Mountain View Addition to the city.

City Attorney Ben Kirven, at a previous city council meeting, explained that the alley was of no interest or use to the city.

5. Mountain View BBQ of Columbus, NC finished second in the “Anything but” category at the Blue Ridge BBQ & Music Festival.

The “Anything But” contest is for main dish creations. Its name derives from the requirement that the dishes submitted cannot include meat from any of the four categories required for Saturday’s judging – chicken, pork ribs, pork shoulder, or beef brisket.

Local restaurateur Shane Blackwell, owner of Mountain View BBQ & Deli in Columbus, has long been a participant in the BBQ Festival both as a competitor and also as one of the BBQ Vendors—that small group of about six cook teams that also sell to the public. This year, Shane and Mountain View BBQ team member Marshall Watkins were proud to have finished in second place in the “Anything But” contest with their entry of a bacon-wrapped filet with a sweet corn and crab salsa.

6. And, of course, Mountain View, CA is the global headquarters for Google (among others).