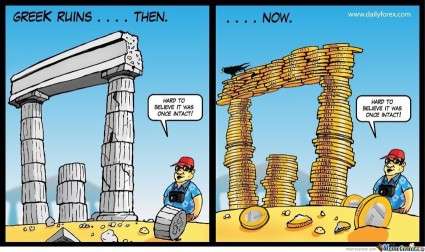 This is the best take on Greece that I have seen. Warning: NSFW (language).

Europe’s creditors are behaving exactly as one might naively predict private creditors would behave, seeking to get as much blood from the stone as quickly as possible, indifferent to the cost in longer-term growth. And that, in fact, is a puzzle! Greece’s creditors are not nervous lenders panicked over their own financial situation, but public sector institutions representing primarily governments that are in no financial distress at all. They really shouldn’t be behaving like this.

I think the explanation is quite simple, though. Having recast a crisis caused by a combustible mix of regulatory failure and elite venality into a morality play about profligate Greeks who must be punished, Eurocrats are now engaged in what might be described as “loan-shark theater”. They are putting on a show for the electorates they inflamed in order to preserve their own prestige. The show must go on.

Throughout the crisis, European elites have faced a simple choice: Acknowledge and explain to electorates their own mistakes, which do not line up along national borders of virtue and vice, or revert to a much older playbook and manufacture scapegoats.

Thanks to Guillermo (@groditi) for pointing to this article. You may agree or disagree, but there’s a lot of truth here.