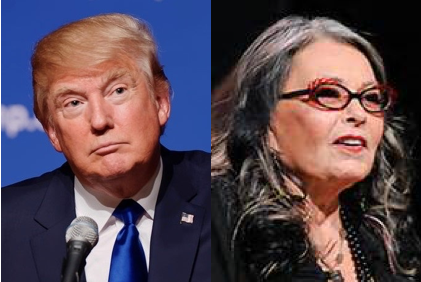 (A pdf version of this article is available. Click here.)

Donald Trump regularly asserts that he is physically attractive to women. I recently ran across some research that provides a rough ranking of several men and women in relative attractiveness. This research shows that Donald Trump’s attractiveness to women is about the same as Roseanne Barr’s appeal to men. Only heterosexuals of both genders were used in this study. You may draw your own conclusions.

I discovered Mr. Trump’s role in sex research while reading What Do Women Want? (Daniel Bergner, 2013, Harper-Collins, pages 50-51, available through iBooks). While I have not yet found the answer to that question, I did stumble across the research of Prof. Terri Conley, a psychologist at the University of Michigan (Dr. Terri Conley, Associate Professor of Psychology and Women’s Studies, University of Michigan).[1]

Either they asked for a date, or they asked, “Would you go to bed with me tonight?” About the same percentage of men and women—50 percent or so—answered yes to the date. But close to three-quarters [75 percent] of the male responders and none of the females said yes to bed.

I will rely on Mr. Bergner’s summary of her research.

Prof. Conley began with a simple experiment. She asked men and women “of average attractiveness” and about 22 years old to approach 200 random strangers and ask one of two questions →

This was consistent with the usual findings and beliefs in the field. But Conley was curious and designed a somewhat different experiment:

Her two hundred college-aged subjects, all of them heterosexual, were asked to imagine scenarios like this: “You are fortunate enough to be able to spend your winter vacation in Los Angeles. One day, about a week into your stay, you decide to visit a trendy café in Malibu that overlooks the ocean. As you are sipping your drink, you look over and notice that the actor Johnny Depp is just a few tables away. You can hardly believe your eyes! Still more amazing, he catches your eye and then approaches you. . . .”

“Would you go to bed with me tonight?” Depp asked the female subjects. So did Brad Pitt and Donald Trump. The males were approached by Angelina Jolie, Christie Brinkley (chosen by Conley because she wondered whether at fifty-something a woman’s age would undercut her appeal despite her extreme beauty—it didn’t seem to), and Roseanne Barr. The experiment stripped away the social expectations, as well as the physical risks, [sic] that auger against a woman consenting to have sex with a stranger. Conley’s setup left only fantasy, frequently a clearer window into desire. The subjects scored how they felt about the propositions. The women were just as avid about saying yes to Depp and Pitt as the men were with Jolie and Brinkley; the women were just as hungry, impulsive, impelled. Trump was dismissed with as much distaste as Barr.

There you have it. Donald Trump and Roseanne Barr were used as the antithesis of sexy, beautiful people. And respondents rejected each with about the same frequency.

So much for Mr. Trump’s notions that he is attractive.