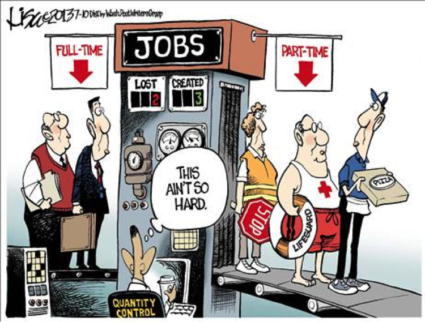 Re-upping the above cartoon from three years ago. From Townhall.com.

Today’s San Jose Mercury-News includes an article titled “Plan to boost part-timers’ hours sparks debate.” The proposal by the South Bay Labor Council would require any company in San Jose with more than 35 workers to offer part-time workers more hours before they hired anyone new. If implemented this proposal will have several effects. But it will not accomplish its objective. Indeed, employment is likely to fall rather than rise. This is yet another San Jose job killer.

“There is a crisis of underemployment in this community and tens of thousands of workers suffer from not being able to get enough hours of work,” said Ben Field, executive director of the council. “We believe that the primary reason is that some employers are trying to avoid paying for health care insurance by keeping their employees in a part-time status. Many workers are crying out for help.”

There is indeed a “crisis of underemployment.” But Mr. Field does not understand the source of the crisis. Failing to diagnose it correctly, he offers a solution that will, in reality, make the problem worse.

The negative effects of Mr. Field’s proposal include slower business growth, companies moving to neighboring towns, and, possibly, much higher costs. One benefit is likely to be a proliferation of new businesses (which, presumably, can hire all the part-time workers they want).

The Root of the Problem

The source of the part-time work problem is the Patient Protection and Affordable Care Act (usually called Obamacare, referred to henceforth as ACA). Remember, for ACA purposes full-time employment is defined as working 30 or more hours a week.[1] About 3.5 years ago I wrote this:

And consider the marginal cost of hiring employee number 50. “Businesses with 50 or more full-time workers must pay a $2,000 penalty for each employee, beyond the first 30 workers, who qualifies for subsidies and does not have employer coverage.[1] Part-time workers also count toward the number of employees in the firm (and thus toward the 50-employee threshold), but the government does not penalize firms for not offering them qualifying insurance.” (from the Heritage Foundation, but widely available. Other good articles are here and here.).  So hiring employee number 50 carries a potential cost of 20 employees (50-30) times $2,000 per employee fine equals $40,000.  That could easily be more than the actual wages paid to the 50th employee.  I suspect there will be many firms that will simply stop hiring once they get to 45 employees.

Is there really any point in calculating marginal tax rates when the dollar penalty for hiring employee number 50 is so high? Well, in fact, yes there is. Consider an employer who wants to expand a business. The firm currently has 72 employees, well above the ACA limit. But some are part-time and, therefore, exempt from ACA. An employee is working 29 hours per week. What is the cost of giving that employee one more hour of work?

That additional labor hour means the employee is now covered by the ACA. And the employer must either provide health insurance or pay the fine of $2,000 per year. Prof. Casey Mulligan has calculated the effective increase in the tax rate caused by the ACA.[3] His best estimate: seven full percentage points. The ACA is the third largest tax increase since 1946. Here are Prof. Mulligan’s estimates. 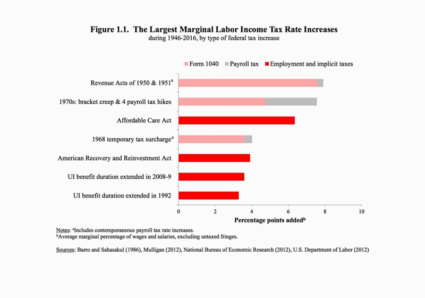 Does this matter? Yes, for a reason not immediately obvious from the graph. That bright red bar means every single percentage point of the ACA’s taxes are “employment and hidden taxes.” That means the taxes are obfuscated. Most people won’t even realize there has been a tax increase. But they do notice stagnant wage and economic growth, as well as the sharp increase in the underemployment rate.

What Will Happen to San Jose?

First, consider business mobility. Some businesses can’t move. Restaurants, hospitals, and universities are three examples. But there are many businesses that can relocate at fairly low cost. Lawyers, dentists, doctors with small clinics, any manufacturing business – in fact, any business that does not own a large, fixed building with substantial physical capital. In fact, the San Jose Mercury-News might be such an example. I don’t know if the Merc owns and operates its printing presses, or even if the newspaper is printed in San Jose. But I’m pretty sure that there is a large physical presence in the city, with a highly integrated editing and publication system.

Finally, there is a large group of businesses that could be located anywhere. Any information workers can do their jobs anywhere there’s a halfway-decent internet connection. I do much of my work from my home office. Moving would be a hassle, but not impossible. But I’m not in San Jose. And there’s another reason I don’t have to worry about idiotic proposals like this.

I have no particular growth aspirations for my business. Which leads to a second way of slicing the problem: growth versus no growth. Businesses that want to grow – especially those that want to grow rapidly – will either leave San Jose or never open an office there. The latter group includes start-ups. Milpitas and Alviso are nearby and fairly affordable. Santa Clara, Cupertino, Mountain View, and Palo Alto are also popular (if you get the venture capital funding to open an office there).

Suppose you own a San Jose restaurant. You want to expand. But most of your employees are part-time, courtesy of the ACA. You will probably give up your expansion plans. So will most people who own small and medium-sized businesses. Mobile businesses that want to grow will move. And San Jose’s tax base will stagnate as economic growth stalls.

Which employees will get the additional hours? Ideally that work would go to the most productive workers. But in the real world I suspect lotteries, other random selection methods, and/or political favoritism within the firm will be more popular options. That will be especially true in service industries where productivity is difficult to measure.

The official unemployment rate dropped to 4.7 percent in May. But that’s because about half a million people dropped out of the labor force. Here’s a quick look at some alternative measures of unemployment. 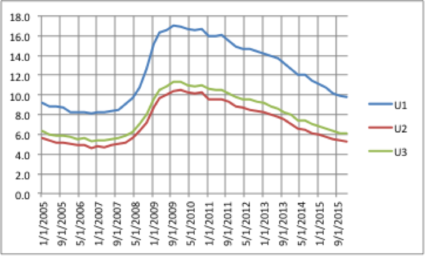 [1] The actual law may well read more than 30 hours. I don’t have the time to look up what is a fairly trivial fact.

[2] The portion of the health care law on the employer mandate explicitly states that firms with more than 50 employees are required to offer “full-time employees (and their dependents) the opportunity to enroll in minimum essential coverage under an eligible employer sponsored plan.” The Department of Treasury, however, has issued a proposed rule linking both the affordability of employer-sponsored insurance and compliance with the individual mandate to single coverage only. Since the employer is not penalized unless an employee enrolls in the exchanges, it is possible that if this proposed rule is adopted, employers will either drop family coverage or be indifferent to the affordability of the workers’ family coverage. Alternatively, the government may ultimately require employers to provide family coverage to workers with dependents. See Patient Protection and Affordable Care Act, Public Law 111-148, § 4980H.