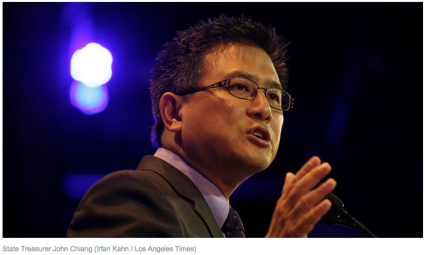 California State Treasurer John Chiang unofficially launched his 2018 bid for governor via a letter to Wells Fargo Bank. Mr. Chiang announced the state government would suspend business with the bank in three areas. Mr. Chiang, of course, has broad authority to grandstand … er, to take actions to benefit the state’s citizens. But the letter goes further and includes actions that violate the state constitution.

The three lines of business targeted by Mr. Chiang are:

He also includes the threat that the sanctions might last longer than one year:

Please note that if Wells Fargo fails to demonstrate compliance with the Consent Orders or evidence surfaces that Wells Fargo has re-engaged in the same behavior showing systemic problems have not been addressed, the measures described will be extended and additional measures may be taken, up to and including a complete severance of all ties between the Treasurer’s Office and Wells Fargo.

According to the Los Angeles Times,

Deputy Treasurer Tim Schaefer estimated the bank earned about $1.75 million in underwriting fees dating to the beginning of 2015 and perhaps as much as a few million dollars in brokerage fees during the most recent fiscal year. Those are tiny figures for a bank that recorded $22 billion in revenue and $5.6 billion in profit in this year’s second quarter alone.

Exactly. Mr. Chiang was trying to generate headlines, not actually damage the bank. Total cost to Wells Fargo: probably less than $5 million, about 0.1 percent of the bank’s profits.

But the second page of Mr. Chiang’s letter includes this:

In addition, I will use my seat on the boards of the nation’s two largest pension funds (i.e., the California Public Employees’ Retirement System and the California State Teachers’ Retirement System) to pursue governance reforms ensuring this type of behavior and systemic corruption does not recur. Combined, the two pension systems have more than $2.3 billion invested in Wells Fargo fixed income securities and equity.

…provides that the board’s duty to participants and beneficiaries takes precedence over any other duty.

This poses a serious problem. Its name is Proposition 162. Passed in 1992 by the state’s voters, the proposition has one basic purpose: to protect the pensions of employees of the state of California. BallotPedia.org has a good summary. One particular clause is important. Proposition 162→

Presumably those “other duties” would include political grandstanding or advancing a personal agenda. By the way, Proposition 162 amended the California constitution. It is not “merely” a law approved by the voters.

Basic finance and economic theory says that limiting the choices available to portfolio managers inevitably reduces the efficiency of their diversification efforts and usually reduces the expected rate of return on the portfolio. Removing Wells Fargo securities from the portfolio necessarily adds unnecessary risk to the portfolio while, at the same time, reducing expected return. Somewhere Bill Sharpe and Harry Markowitz are screaming with outrage.

Mr. Chiang has broad authority to manage California’s budget. However, he lacks any authority to diminish the efficiency of CalPERS investments. Doing so would violate both the letter and the spirit of Proposition 162.

(Those interested in more information about Proposition 162 should consult BallotPedia.org and CaliforniaStateRetirees.org.)