This from NBC News Bay Area:

With fake news grabbing international headlines, the librarians in Oakland, Calif. want to put a kabash [sic] on the lies.

So they recently negotiated a deal with the New York Times to offer library patrons at 18 of its libraries free, unlimited access to the paper of record, according to Main Library Supervisor Mana Tominaga. The program launched in late November, a couple weeks after Donald Trump was elected president and Buzzfeed, the New York Times, the Washington Post and others began reporting that fake news websites might have swayed voters.

Now, under this new scenario, patrons have full access to the Times, and can search to their hearts’ delight and read whatever they want for free. In addition the libraries have limited numbers of 72-hour passes that can be used outside of the library.

Oakland libraries negotiated a deal that will cost $5,000 a year out of an annual operating budget of $26 million – about $1.8 million of which is spent on books, videos and other materials, public records show.

And, with the competence we’ve come to expect of local public institutions, it turns out you don’t even have to own an Oakland Library card. Go to http://www.oaklandlibrary.org/ and search for “New York Times.” You’ll see this: 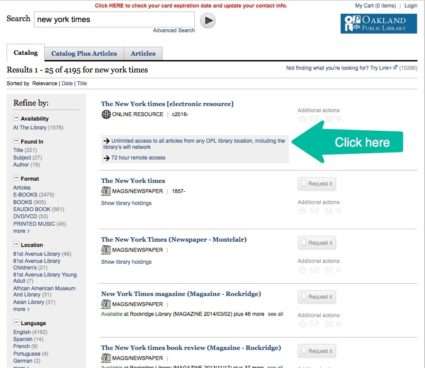 Click the link noted and, presto, you get the full New York Times. No need to log in or even have any city or county library card!

But you better be quick. I predict the Times will shut down access in a hurry once they read this.