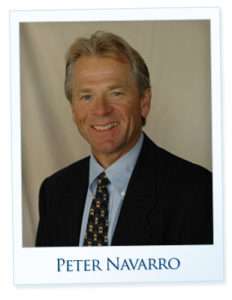 [Updated April 17, 2017 with new information about how Prof. Navarro got his White House job.]

Who is Peter Navarro? Peter Navarro, Ph.D., is Donald Trump’s chief economic adviser. His Ph.D. is in economics (Harvard, 1986). He has been professor of economics and public policy in the U.C. Irvine business school since 1989.

He completed his Ph.D. in 1986 after earning a B.A. from Tufts University (1972) and an M.P.A. from Harvard’s Kennedy School of Government in 1979. From 1973 through 1976 he served in the Peace Corps in Thailand. Interestingly he has apparently never held a job in the private sector.

From his curriculum vita:

How Did He Get This Job?

I’ve always been curious about how Prof. Navarro got his job in the White House.  Scott Lincicome pointed to an article in Vanity Fair.  The relevant excerpt is below (emphasis added by me).  Warning: this is NSFW (language).


He’s a Democrat — Or At Least He Was

But here’s what’s really important: Mr. Navarro is a Democrat. He has run for public office three times. From Wikipedia (links are to Wikipedia pages):

Navarro ran for office in San Diego, California, three times. In 1992, he ran for mayor, winning the primary race, but losing to Susan Golding in the runoff.[7] In 1996, he ran for the 49th Congressional District as the Democratic candidate, but lost to Republican Brian Bilbray.[8] In 2001, Navarro ran in a special election to fill the District 6 San Diego city council seat, but lost in the primary.[9]

Ms. Golding was the Republican candidate. As far as I can tell the San Diego city council elections are non-partisan. In two of his three runs for public office, Prof. Navarro ran as a Democrat.

But he’s an economist. Should we really worry about his political affiliation? What can we learn from looking at his website and his research.

Based on his personal website, Mr. Navarro’s main talent seems to be public speaking. He is a large presence in online teaching. In addition, he is represented by an agency for his public appearances. His personal home page reveals two things.

First, his strength is most assuredly not web page design. Second, he has quite a talent for self-promotion. No wonder he gets along with Mr. Trump.

Mr. Navarro’s dissertation was A Theoretical and Empirical Investigation of Corporate Charity Motives. But from 1980 through 1988 virtually all of his publications were devoted to energy and regulatory economics. His academic (and other) contributions to macroeconomics and macroeconomic policy are virtually nonexistent. He appears to have switched his concerns to political economy with the emphasis on the first word.

In other words, Mr. Navarro is completely unqualified to advise on macroeconomic issues.