[Update December 3: sometime this week I expect to add to this article including international income accounting details.]

Taiwan’s Foxconn announced they will build a $10 billion factory in Wisconsin.  Eventually the plant will employ 10,000 workers.  Part of the reason Foxconn can make this investment is the U.S. balance of trade deficit with Taiwan. That deficit creates a net financial inflow into the U.S. Some of that inflow will be the Foxconn plant. In the financial account this is recorded as “foreign direct investment” (FDI).

The implications are staggering, but we need to understand some details first. So go get another cup of coffee – studying accounting always puts me to sleep. And remember, this is accounting. All the relationships described here are identities and definitions. In what follows the U.S. will be the home country and Taiwan will be the foreign country. To avoid repeating the tedious phrase “goods and services” let’s just call them “products.”

But what about the financial account? For accounting purposes, what matters is the flow of spending. An export creates a flow of spending from Taiwan to the U.S. The financial account equivalent is the purchase of a U.S. asset by a Taiwanese entity. Thus, when Sony bought Columbia Pictures Entertainment in 1989 that created a financial inflow (debit entry) for the U.S. Putting it bluntly, a country finances it’s trade deficit by selling assets to foreign countries. (As an aside, some economists argue that the U.S. has a comparative advantage at creating assets. If they’re correct, running a balance of trade deficit is actually a good strategy.)

For example, suppose you are vacationing in Belize. You drop into a bar on Secret Beach and buy a beer for $2.50. Like many small tourist destinations, Belize accepts U.S. dollars as well as their currency, the Belize dollar. Because you are not a resident of Belize, your purchase counts as an import to the U.S. An increase in imports increases both the balance of trade deficit and the current account deficit. Offsetting this transaction is the $2.50 the bar now has – an asset for the Belize financial account and a liability for the U.S. financial account.

A current account deficit must be matched by a (roughly) equal net sale of home assets to the foreign country.  Those can be real estate, U.S. government securities, and many other physical and financial assets. The proposed Foxconn project is FDI.  The numerous vehicle assembly lines built by BMW, VW, Toyota, Honda, and others are also FDI. And FDI creates jobs in America. (“Investment” as used by economists means physical capital. Foxconn building a new factory in the U.S. is investment. Foxconn buying $100 million in U.S. government securities is not investment, but is still recorded as a financial account transaction.)

Measuring these variables is difficult. It’s even harder because of smuggling and other illegal activities. For example, suppose someone arrives at a U.S. airport with checked luggage containing $100,000 in hundred dollar bills. That will probably not be measured in the balance of payments accounts. 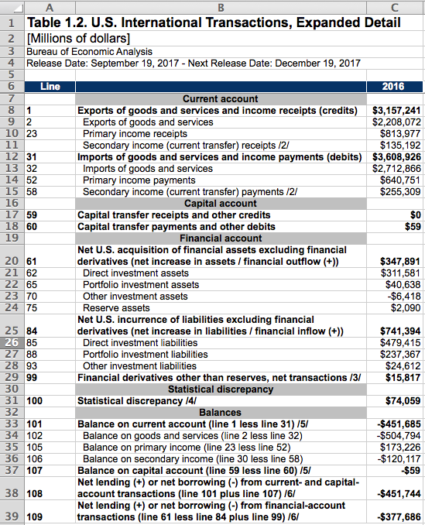 The same economists who know the relationship between the current account and the financial account will also tell you that attributing any single FDI event to the current account balance is, well, foolish.  But consider the counterfactual. If U.S. trade with Taiwan had been balanced (current account balance equals zero), there would not have been excess dollars in Taiwan that needed to be used to buy something.  Without the trade deficit, it’s unlikely that Foxconn would invest in Wisconsin.

A country’s business fixed investment involves putting up buildings and stocking them with all sorts of office and factory equipment. This investment is financed by a country’s savings. Financial intermediaries channel those savings to investments through many channels: loans, mutual funds, direct stock purchases, bonds, and so on. The three sources of savings are personal, government, and foreign. (A government budget surplus adds to savings, while a deficit subtracts.)

We know U.S. residents don’t save very much. And the last government budget surplus was in 2000. Since 1971 the U.S. has run an international current account deficit for all but seven years. But that means we have experienced a net international financial account inflow. This has kept U.S. business fixed investment growing. Since 1991 U.S. net investment has grown by 2.2 percent per year. For better or worse, the net financial inflow has also partly financed the government budget deficit.

If we balanced the current account, we would also balance the international financial account. And U.S. business fixed investment would grow at an even slower rate than has been the case in recent years. Is that really what we want?