The Irony is Deafening

This is the story of how in drought-prone California politicians and bureaucrats find ways to keep the state thirsty.

August 31, 2017 was a very bad day for Mario Santoyo.  The California Water Commission (CWC) turned down his group’s application for funding the Temperance Flats Dam and Reservoir.  Their proposal, under the auspices of the San Joaquin Valley Water Infrastructure Authority (SJVWIA), came with a price tag of $2.14 billion (figures rounded to two decimal places). Under the conditions set forth in Proposition 1, passed in 2014, half the cost – $1.07 billion – was allowed to be drawn from Prop. 1 funds.  The SJVWIA would be responsible for the other half. On the same day, all ten other proposals for water storage projects were also turned down.

Mr. Santoyo responded promptly to this rejection with a letter announcing that the SJVWIA was filing an appeal. The CWC has been lambasted by politicians and almost everyone else for very low ratings given to 11 proposals for new storage. (For examples click here, here, here, and here.) But it’s not entirely the CWC’s fault. Much of the blame lies with the former California Attorney General (now U.S. Senator) Kamala Harris, the state legislature, and Governor Jerry Brown. They set up the bureaucratic process responsible for this this thwarting of the public will expressed in the California 2014 election vote.

How the System Is Supposed to Work

The CWC project ranking process gives the appearance of a fair, honest process.  Project proposals are evaluated based on a “public benefit ratio” (PBR).  That’s the total estimated public benefit dollars divided by the estimated amount of  Prop. 1 dollars allocated to the project.  A project must exceed a PBR of 1.00. For example, Mario Santoyo’s Temperance Flats team estimated public benefits of $3.06 billion and requested $1.07 billion of Prop. 1 funds. Thus the PBR was 2.86.  But CWC staff – in collaboration with other state agencies – reduced the public benefits to $0.10 billion for a PBR of 0.10.  The other ten proposals were given similar treatment by the state. Not a single one of the eleven had a PBR above the cutoff level of 1.00.

Here’s the complete list of applicants including their original PBR estimates and the CWC staff revised estimates. 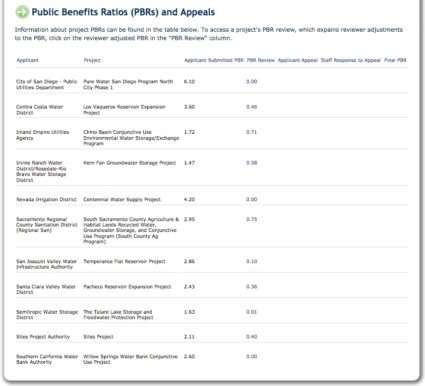 So what are these “public benefits?”  Surprise! Under the terms of Prop. 1, water itself is not a public benefit.  It is viewed as a private benefit since the consumers and businesses will buy it.

“Wait,” so you’re saying, “water itself has no public benefit?” This is the first gotcha in Prop. 1.

Devilishly hidden, buried on page 22 of the 32 pages of Prop. 1 is the list of items that count as public benefits.  These include 1) ecosystem improvement, 2) improvements to recreation, 3) flood control enhancements, 4) water quality improvements, and 5) emergency response “including, but not limited to, securing emergency water supplies and flows for dilution and salinity repulsion following a natural disaster or act of terrorism.”  Translation: the emergency response is primarily to provide an infusion of water, by truck if necessary, to keep fish and other aquatic life alive. And, as an additional zinger, at least half the public benefits must be in category 1) ecosystem improvements.

According to the Chris Orrock of the California Water Commission, more water  for agriculture of for municipal water companies has no public benefit. “We’re not paying for water. We’re paying for public benefits.  As defined in Prop. 1, water is not one of those benefits that we are funding. We’ve been very clear at every step.”

California voters may disagree that it’s clear.  Proposition 1 authorized issuance of $7.5 billion to fund various water projects.  In 2014 Voters passed it with 67.13 percent voting in favor. The largest single category of funding in plain, clear English on the ballot summary is “$2.7 billion for water storage projects, dams, and reservoirs.”  The other $4.8 billion appears to be for environmental efforts. This sounds straightforward.

The Results of the Appeals

Ten of the eleven applicants (including the SJVWIA) appealed the initial CWC evaluation.  (The Nevada Irrigation District figured out the game and decided not to spend further resources.)

On April 20 Mr. Santoyo got another shock.  After spending countless hours preparing and filing their appeal, CWC raised the Temperance Flat PBR to … wait for it … 0.3.  Total public benefits were estimated at $400.7 million dollars.  Although it’s irrelevant to the CWC evaluation process, Temperance Flat would have added a whopping 1.26 million acre-feet of water storage.  That’s the second largest proposal.  The Sites Project would have added 1.8 million acre feet.  CWC gave Sites a 0.6 PBR.

Here’s the complete list of projects with the post-appeal PBRs. 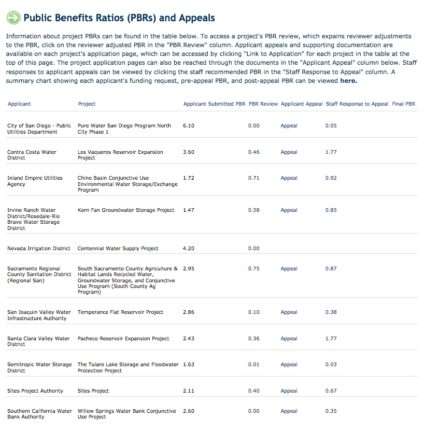 How Prop. 1 Was Sold to Voters

But in the Alice in Wonderland world of Sacramento politics, nothing is ever as it seems…the most productive storage projects like Shasta Dam are ineligible for Prop. 1 funds. This is the second gotcha.

In 2012 and 2013 in the run up to the 2014 Prop. 1 election, the California media ran many positive articles about potential water storage projects such as a Shasta dam extension, implying these could help produce a more robust water supply helping prevent extreme drought conditions. Raising the height of the Shasta Dam by 18.5 feet has been known for decades to be the single most cost-effective project to increase water supply in California. It would capture an additional 634,000 acre-feet of the spring runoff from melting snow in the northern Sierras. The estimated price tag is $1.4 billion.  Over a 100 year lifetime, that works out to about $0.025 per gallon per year.

By 2016 when the CWC started accepting project proposals, a Shasta Dam project was not among the eleven proposals. Why not? 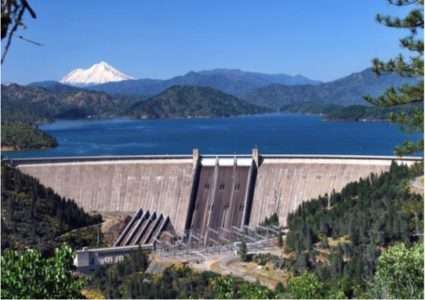 The verbose but contorted explanation is found on page 10 of the 32 pages of Prop. 1: “Nothing…shall be construed to affect the California Wild and Scenic Rivers Act … or the Federal Wild and Scenic Rivers Act …and funds authorized pursuant to this [Proposition] …shall not be available for any project that could have an adverse effect on … [the ecosystem of] a wild and scenic river or any other river… afforded protections …[in those Acts].”

A Bait and Switch

So the Prop. 1 YES voters, were baited with positive-spin media about the drought prevention benefits of a Shasta Dam extension project – which is on a forbidden river.  Obviously much of this pre-election media was smoke and mirrors.

And here’s what Nancy Vogel, deputy secretary for communications at the California Natural Resources Agency, had to say about a Shasta Dam project’s possibility in 2015.

… the project is not eligible for funding from Proposition 1, as funding cannot go to any project that would negatively affect a river protected under the state’s Wild and Scenic Rivers Act… Raising the dam would inundate portions of the [upstream] protected McCloud River.

Instead, two projects received PBRs over 1.00.  Both would expand existing reservoirs in Santa Clara and Contra Costa counties.  The cost of water from those two projects is around $0.10 per gallon per year.  And, in total, they add 250.600 acre feet if storage.  Here’s my analysis of the per-gallon cost of each of the projects with “raising the Shasta Dam” as an added option. 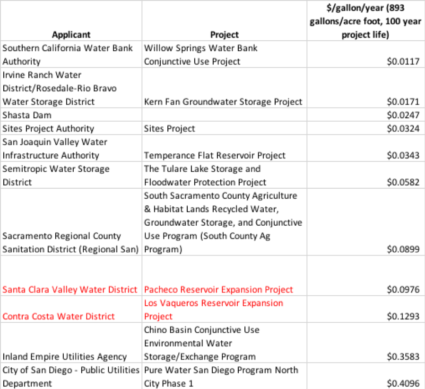 Cost per gallon storage. Approved projects are in red. (Click for larger image)(

Del Norte county lies in the northwest corner of the state. It averages 132 inches of rainfall per year. The neighboring counties get between 43 and 55 inches per year.  The San Francisco area, by comparison, gets 24 inches per year.  Yet not one of the eleven proposals to CWC would have harvested this massive quantity of water. 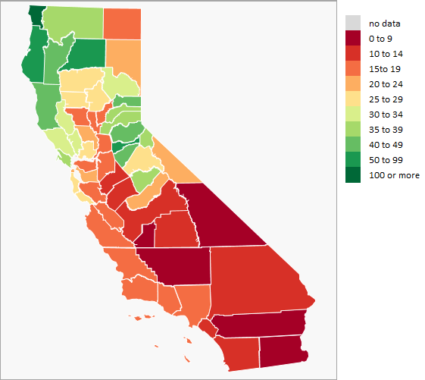 California rainfall in inches per year by county (click for larger image) Source: author calculations based on city rainfall data. Map pproduced with the help of Robert Mundigl the proprietor of Clearly and Simply for his help modifying his Excel Visual Basic software to create this map.

If you’re interested in matching county names with the above map, here’s a key. 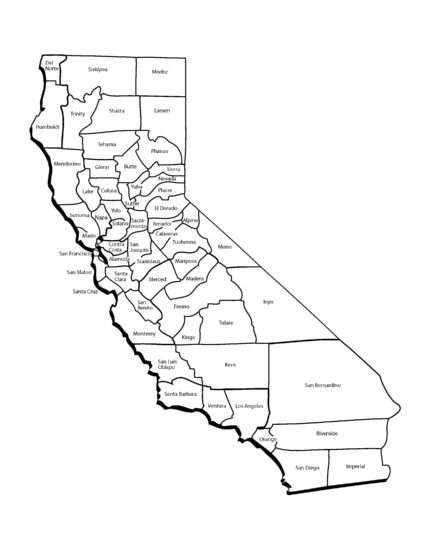 The reason is simple: those counties are covered with wild and scenic rivers.  Any attempt to build a dam in that part of the state would necessarily impact those rivers.  So nobody even bothered to put together a proposal. 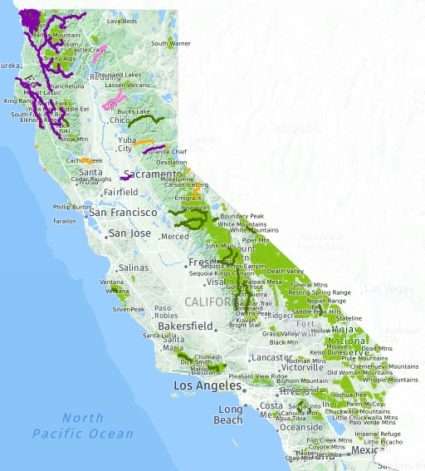 Yes, the California Water Commission is a party to this hoodwinking of California voters. But the real villain here is then-California Attorney General Kamala Harris. Her office wrote the misleading Prop. 1 ballot summary that omits any reference to the two gotachas: first, the carve-out excluding water storage projects that use the most productive rivers and second, the notion that increasing the water supply for humans and their crops isn’t a benefit. (Ms. Harris is now a U.S. Senator.) The ballot summary mentions three of the five public benefits, but omits any mention of the prohibition on doing anything that would affect wild and scenic rivers. 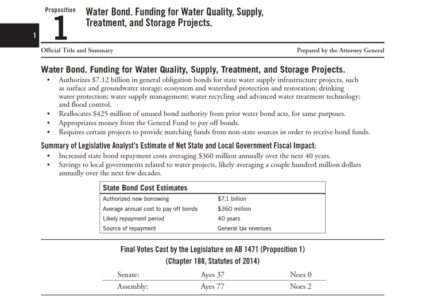 It’s gotchas like these that have convinced some California voters to never, ever again support another bond issue of the State of California or any local governing authorities. We really thought we were voting YES so that about a third of the Prop. 1 $7.5 B tax dollars would help fund the capture more of the snow runoff that now escapes to the Pacific Ocean. But in practice we were voting against more water storage. We were suckers. We need to restore balance between the water needs of cities and agriculture, and ecological conservation. And we need more transparency about the contents of state ballot measures.