About a month ago the California Water Commission released two new documents about the distribution of Proposition 1 funds for water storage projects. I wrote about this issue at length in May. This is an update on Proposition 1.

At that time it looked like only two of the original eleven projects would receive funding.  That has now changed with fully eight projects being awarded money.  The catch is that the two largest projects – Temperance Flat and Sites – were given 6.6% and 0.2% of the total project cost.  I predict those projects will never be built. Which is too bad because water from those projects would have been the third and fourth lowest cost of the eight, about $0.03 per gallon per year.  (As discussed in my previous article, raising the height of the Shasta Dam is probably the most cost-effective project.  Prop 1 funds cannot be used for that purpose because increasing water storage in Lake Shasta would impact at least one wild and scenic river, a violation of the terms of the water bond. I’ve included a table at the end of this article that shows my estimates of the cost per gallon of each of the eight projects plus the Shssta dam height increase.  It looks like the Shasta project would be the third least expensive of the nine.)  Here’s how the projects stack up in cost per gallon per year.  (Click here to download my Excel workbook with data and calculations for all my articles about water in California.  This is not for the faint of heart.) 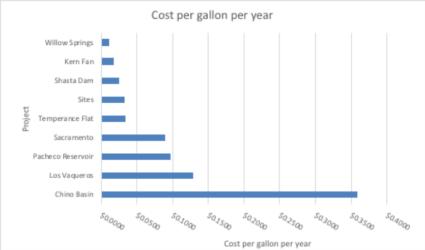 But one project stands out for several reasons: The South Sacramento County Agriculture & Habitat Lands Recycled Water, Groundwater Storage, and Conjunctive Use Program.  That project was awarded fully 75 percent of its estimated cost.  This is in apparent violation of the Prop 1 rule that no more than half the cost of any project can be paid for with Prop 1 funds.  The Sacramento Regional County Sanitation District (the agency behind this proposal) found the lone loophole to the 50 percent rule: Section 79751 (c) exempts “Conjunctive use and reservoir reoperation projects.”  Sure enough, tacked on at the end of the project name is the key phrase “conjunctive use.”

This stinks on a number of levels.  First of all, Sacramento is the state capital (for those who have forgotten that U.S. geography class). Second, while two other projects are less than 0.1 percentage points over the 50 percent limit, this is the only project that got such favorable treatment.  And it only adds 50,000 acre-feet per year to total storage.  That is second lowest among the eight survivors, with only the Chino Basic Conjunctive Use project offering less water (15,000 acre-feet per year).  Each of the other six projects produces at least 100,000 acre-feet per year, twice what Sacramento will produce. 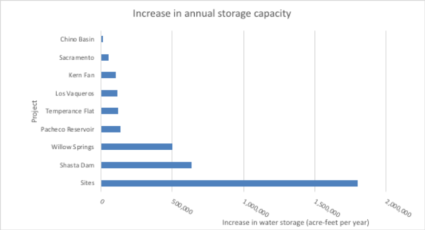 The real irony is that before 2005 only about 20 percent of Sacramento households had water meters.  The rest were charged a flat monthly rate.  You don’t have to be an environmental economist to figure out that there is little incentive for water conservation under a system like that.  By the way, current estimates are that the city will be completely metered by 2020.  A mere 15 years.

The City of Sacramento has a web page devoted to tracking progress on this project.  Two paragraphs stand out (emphasis added).

In 2005, the City of Sacramento began one of its most significant capital improvement projects, the installation of water meters throughout the City. At that time, only 20% of the City’s water service connections were metered, so significant work was needed in order to meet state mandate (AB2572) by 2025.

The City of Sacramento, Department of Utilities is currently installing water meters, advancing metering communications technology, abandoning some backyard water mains, and installing new mains placed in the street right-of-way as part of the Meters Matter program. Work began in May 2017 and is scheduled to continue through the end of 2020.

That’s right.  It only took them 12 years to begin the project.  And we’re supposed to believe they can deliver on their proposed $373 million project?  (By the way, the original cost estimate was $314,980,880, making this project one of only two whose revised cost estimate exceeded the original.)

What the CWC released

The first table calculates an overall score for each project. Naturally, the first factor is the public benefit ratio.  But here that measure only gets 33 out of 100 points! I, along with many others, thought the PBR was the end of the story.

What’s interesting about this table is its apparent violations of Prop 1. We knew the PBR would be important.  But only one of the other three scoring criteria is mentioned in the text of Prop 1. The governing text is in Chapter 8, Statewide Water System Operational Improvement and Drought Preparedness.  At least “relative environmental value” is included in this Chapter.  Here’s the relevant section:

That appears to validate including this in the scoring, albeit via either a backdoor or a loophole.

Resiliency appears twice in the text. You’ll find that word in Chapter 6. Protecting Rivers, Lakes, Streams, Coastal Waters, and Watersheds and Chapter 11. Flood Management  It is nowhere to be found in Chapter 8.  It should not have been a factor in the decision.

Even worse, “implementation risk” is nowhere to be found in Prop 1.

Another interesting aspect of this table is that some scores were adjusted by the CWC.  We will probably never know the original values, but it’s a good bet that the two adjustments to the South Sacramento County Ag Program were increases. 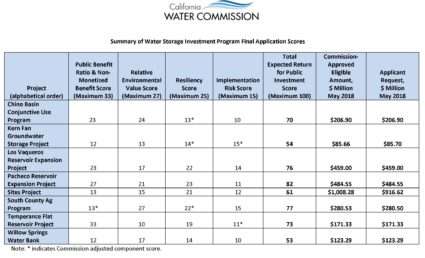 The second table ranks the proposals and includes details of the amount of funding for each.  A “Total Expected Return for Public Investment Score” of 70 or higher means the proposal is ranked 2.  Five proposals fall into that category.  The other three are ranked three.

What’s really entertaining about this table is the very bottom line.  Apparently the commission awarded $146,250,000 more than the $2.7 billion allowed by Prop 1.  They will recoup all that and more when the sponsors of the Temperance Flat project throw in the towel. This will allow the CWC to cover cost overruns on other projects.  I predict the Sacramento project will be a large source of those overruns. 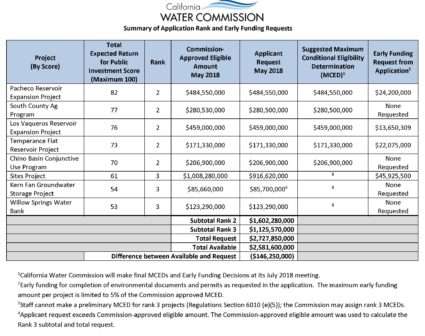 Which Projects Will Actually Be Built?

I can see two that will most likely never see groundbreaking: Temperance Flat and Sites.  Those projects were awarded 6.6% and 19.4% of the estimated cost.  The total amount awarded  to them was $1.179 billion, more than enough to cover the shortfall with plenty left over for cost overruns on the remaining six projects.  I predict a big hunk of that change will go to the Sacramento project. 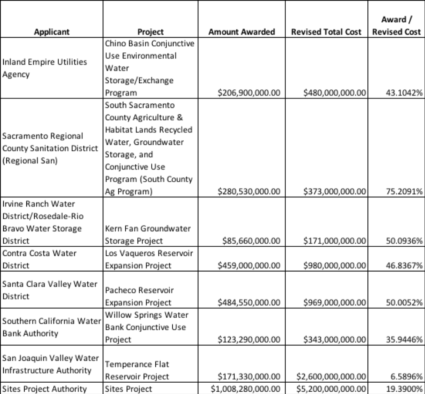 As promised, here’s the table ranking the projects (plus the Shasta Dam) by cost per gallon of additional storage per year.  Among many others, I’ve assumed a 100 year lifetime for each project (consistent with estimates in several of the proposals) In the Excel workbook see the tab “Projects Costs Storage working.” 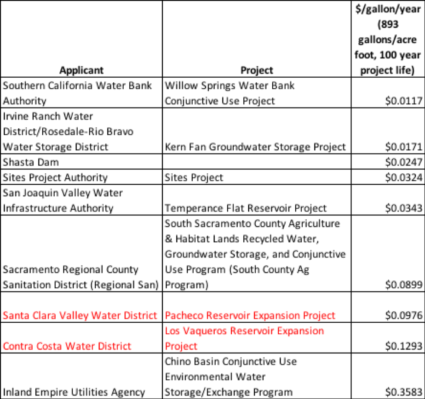 Impartiality theater.  That’s the only way to describe this whole process.  Start with the gotchas embedded in Prop 1, including the wild and scenic rivers clause that eliminated the Shasta Dam from consideration.  Add the apparent violations of Prop 1 in the scoring.  And the blatant favoritism given to the Sacramento project is shameful, even by California political standards.