Monty Python meets Virginia politics.  This has nothing to do with economics, but it is too funny not to share.  From Scott Bixby (@scottbix) on Twitter:

Strange women lying in ponds distributing swords is a better basis for a system of government than whatever the hell is going on in Virginia. 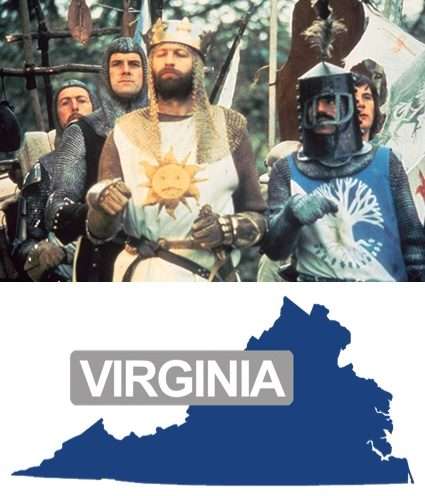 Monty Python looks down on Virginia

For those who have not kept up with their Monty Python homework, this is a rephrasing from Monty Python and the Holy Grail (1975). From Wikipedia (boldface added):

King Arthur: Old woman!
Dennis: Man.
King Arthur: Man, sorry. What knight lives in that castle over there?
Dennis: I’m 37.
King Arthur: What?
Dennis: I’m 37. I’m not old.
King Arthur: Well I can’t just call you “man”.
Dennis: Well you could say “Dennis”.
King Arthur: I didn’t know you were called Dennis.
Dennis: Well you didn’t bother to find out, did you?
King Arthur: I did say sorry about the “old woman”, but from behind you looked…
Dennis: What I object to is you automatically treat me like an inferior.
King Arthur: Well, I am king.
Dennis: Oh, king eh? Very nice. And how’d you get that, eh? By exploiting the workers. By hanging on to outdated imperialist dogma which perpetuates the economic and social differences in our society. If there’s ever gonna be any progress…
Peasant Woman: Dennis! There’s some lovely filth down here… Oh! How do you do?
[Dennis joins the Peasant Woman in the nearby filth patch]
King Arthur: How do you do, good lady? I am Arthur, king of the Britons. Whose castle is that?
Peasant Woman: King of the who?
King Arthur: The Britons.
Peasant Woman: Who’re the “Britons”?
King Arthur: Well, we all are. We’re all Britons, and I am your king.
Peasant Woman: Didn’t know we had a king. I thought we were an autonomous collective.
Dennis: You’re fooling yourself. We’re living in a dictatorship! A self-perpetuating autocracy, in which the working classes…
Peasant Woman: Oh, there you go, bringing class into it again.
Dennis: Well, that’s what it’s all about! If only people would–
King Arthur: Please, please, good people, I am in haste. Who lives in that castle?
Peasant Woman: No one lives there.
King Arthur: Then who is your lord?
Peasant Woman: We don’t have a lord.
King Arthur: What?
Dennis: I told you, we’re an anarcho-syndicalist commune. We take it in turns to act as sort of executive officer for the week…
King Arthur: Yes…
Dennis: …but all the decisions of that officer have to be ratified at a special bi-weekly meeting…
King Arthur: Yes I see…
Dennis: …by a simple majority in the case of purely internal affairs…
King Arthur: Be quiet!
Dennis: …but by a two thirds majority in the case of more…
King Arthur: Be quiet! I order you to be quiet!
Peasant Woman: “Order”, eh? Who does he think he is?
King Arthur: I am your king.
Peasant Woman: Well, I didn’t vote for you.
King Arthur: You don’t vote for kings.
Peasant Woman: Well, how’d you become king, then?
[An angelic choir begins…]
King Arthur: The Lady of the Lake, her arm clad in the purest shimmering samite, held aloft Excalibur from the bosom of the water, signifying by divine providence that I, Arthur, was to carry Excalibur. [singing stops] That is why I am your king.
Dennis: Listen. Strange women lying in ponds distributing swords is no basis for a system of government. Supreme executive power derives from a mandate from the masses, not from some farcical aquatic ceremony.
Arthur: Be quiet!
Dennis: You can’t expect to wield supreme executive power just ’cause some watery tart threw a sword at you!
Arthur: Shut up!
Dennis: I mean, if I went around saying I was an emperor just because some moistened bint had lobbed a scimitar at me, they’d put me away!
Arthur: [grabs Dennis] Shut up! Will you shut up?!
Dennis: Ah, now we see the violence inherent in the system!
Arthur: [shakes Dennis] Shut up!
Dennis: Oh! Come and see the violence inherent in the system! Help, help, I’m being repressed!
Arthur: Bloody Peasant!
Dennis: Ooh, what a giveaway! Did you hear that? Did you hear that, eh? That’s what I’m on about! Did you see him repressing me? You saw it, didn’t you?