[This is a long, detailed article. For your convenience there is a PDF version at the bottom.]

Copyright 2019 Tony Lima. All rights reserved. Excerpts up to 250 words are permitted as long as a link to this article is included and credit given to the author.

[Updated July 24, 2019 to correct an error in calculating the reduced efficiency caused by using natural gas to generate electricity.]

The Berkeley city council has voted to ban the use of natural gas in new residential construction beginning January 1. Their stated reason is that residential use of natural gas makes up 15% of Berkeley’s total greenhouse gas (GHG) emissions. The city council has structured this ban so it focuses on a relatively trivial contribution to GHG emissions while ignoring the elephant in the room, transportation. Even worse, the city’s plan will increase overall state wide GHG emissions from burning natural gas for residential use. Finally, Berkeley takes no responsibility for emissions created by the Oakland airport. This despite the fact that Berkeley residents regularly use this facility. It’s the ultimate NIMBYism to adopt a plan that will increase overall statewide emissions, continue to outsource a major part of greenhouse gas emissions to another city, and reduce your city’s GHG emissions by a trivial amount.

It’s the ultimate NIMBYism to adopt a plan that will increase overall statewide emissions, continue to outsource a major part of greenhouse gas emissions to another city, and reduce your city’s GHG emissions by a trivial amount.

The San Francisco Chronicle’s summary of the Berkeley ordinance is pretty good.[i]

It goes into effect Jan. 1 and does not affect existing buildings. Accessible dwelling units, including basements and attics, are exempt. [Applies to interior ADU’s only.]

It applies to building models reviewed by the California Energy Commission and determined to meet state requirements if they are electric only.

Berkeley’s new regulations will update as the state commission approves more models, without the City Council having to vote again.[ii]

What in the world are these “California Electric Commission building models”? The CEC creates model buildings that use only electricity. Currently most of the approved models are for residential structures. They are developing new models for various commercial and government structures. As those new models are approved, construction of those types of structures will be automatically included in Berkeley’s new ordinance.

Berkeley has been kind enough to show us the sources of greenhouse gas emissions within the city limits. 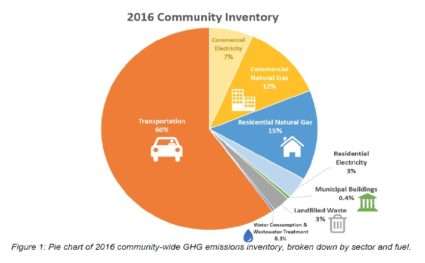 You’ll immediately notice that big orange slice. That’s cars, buses, trains, and other forms of transportation. Those account for 60% of greenhouse gas emissions. Luckily for the city of Berkeley, they do not have their own airport, relying on their southern neighbor Oakland for air transportation services.

Berkeley’s Plan Will Have a Negligible Impact

Berkeley has generated a lot of press buzz with this action.  But this new law will do little to reduce GHG’s.  First, it only affects new construction. Existing houses with natural gas will be allowed to continue to use it. Even over a 5 or 10 year period, new construction in Berkeley is a tiny percentage of the total housing stock. There will be only a slight impact on greenhouse gas emissions.

Second the system-wide effect upstream will be to actually increase greenhouse gas emissions in the state. To get one unit of electricity from the generating plant to the consumer requires three times as much natural gas as simply burning the natural gas in the house. New residential units constructed after January 1, 2020, will consume 39.5% more natural gas than existing units. The city of Berkeley will reduce its greenhouse gas emissions at the cost of bumping up statewide emissions.

When considering the overall impact of Berkeley’s regulation it’s important to account for the number of existing housing units compared to the number of new units.  The US Census Bureau compiles data on housing units by city.[i] The most useful measurement for assessing energy impact is the total number of rooms available. Thus a house with two bedrooms, two bathrooms, a living room, a kitchen, and a dining room would count as seven rooms.

But consider this. There is no way to really make a near-term  dent in that 15% of GHG emissions from residential sources without requiring retrofitting of existing housing. Waiting for teardowns and new construction is too slow. If you own a house in Berkeley, beware. The city Council has plans for you that they haven’t told you about yet. . For example if you just want a new gas stove that will probably be grandfathered in. But if you want to remodel your whole kitchen for $50,000+ the city council may not grandfather that and you’ll be using an induction stove.