[Update: cited by  Megan McArdle in the Washington Post.]

Is it possible to buy goods and services that do not exist? This existential question was raised by the Fed’s actions March 3. Cutting their target interest rate by 50 basis points sends two messages. First, the Fed believes that current conditions are very contractionary. Second, the Fed is trying to promote confidence. This will not work.

But what about fiscal policy? The Wall Street Journal’s Chief Economics Commentator, Greg Ip, concurs that monetary policy will not work. But he then argues that fiscal policy can work because there’s plenty of headroom for the government to borrow.

This will not work. Both fiscal and monetary policy rely on the availability of goods and services for recipients of the funds to purchase. You cannot buy stuff that does not exist. The main result of expansionary policy, be it monetary or fiscal, will be inflation.

A Brief History of Macroeconomics

Not many people remember the phrase “fine tuning.”[1] In the late 1960s some economists started using that phrase in the belief that fiscal and monetary policies could push the economy to any desired combination of inflation and unemployment. The Phillips Curve was the intellectual basis for this idea.[2] 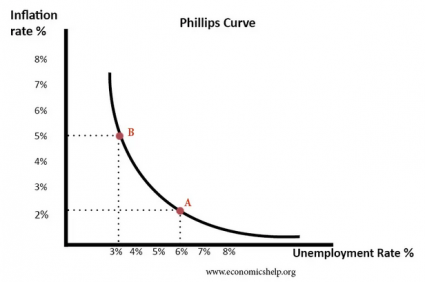 The basis for the Phillips curve was empirical work done by A.W. Phillips relating the unemployment rate to the percentage change in wages. U.S. economists, led by Robert Gordon,[3] noted that wages were a large part of the cost of production. Since prices reflect costs, they reasoned that they could replace the growth rate of wages with the inflation rate on the vertical axis. They were correct in a limited sense of the word.

Let’s look at the data. Here’s the standard Phillips Curve graph using data from the 1960s. The red line is the best-fit regression.[4] 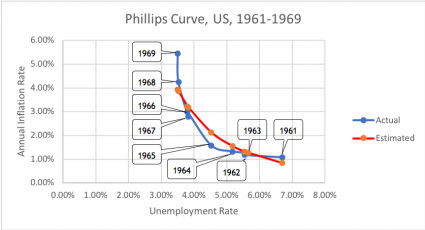 Now let’s look at the same data for the 1970s. For obvious reasons I did not try to estimate this curve. 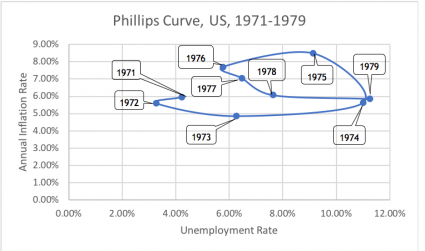 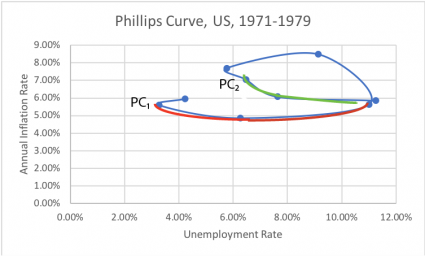 The 1970s were an era of economic upheaval. The OPEC cartel tripled the global price of oil not once, but twice. At one point there was a flat-out embargo on oil sales from OPEC member countries to the U.S. This was exacerbated by wage and price controls (President Nixon) and price controls on gasoline (President Carter). That decade led Paul Samuelson to coin the word “stagflation,” an era of high inflation and high unemployment. Arthur Okun codified this in his “misery index,” the sum of the inflation and unemployment rates.

The key factor that shifted the Phillips curve was high inflation. Inflation rates rose between 1971 and 1974. This inflation was unanticipated in that many people did not see it coming. When they adjusted their expectations in 1975, they overestimated future inflation. The new, higher level of inflation expectations define the second, higher, Phillips curve.

You had to live through that era to understand the impact on the economics profession. It happens that I was studying economics at Stanford at that time. I watched macroeconomists throw out their models. Some gave up. But others did the hard work that led to an understanding of the important role of expectations in market economies. An increase in expected inflation shifts the Phillips curve up and to the right. A decrease shifts the curve down and to the left.[5]

This material is straight out of baby macroeconomics. In one version or another it is included in almost all principles of macroeconomics textbooks. This model is the result of decades of research.

Let’s begin with some definitions. Aggregate demand (AD) is total planned spending in the economy. (There can be a difference between planned and actual spending that results in unexpected changes in business inventories.) Aggregate supply (AS) is total actual production in the economy holding unit production costs constant. Significant, economy-wide increases in cost shift the short-run aggregate supply curve (SRAC) up and to the left. In the 1970s the cost increase was the large runup in oil prices.[6] 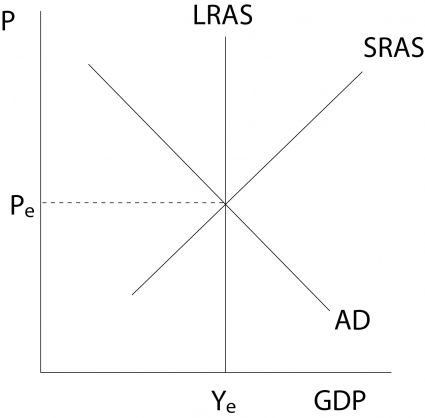 Alert observers will notice that the vertical axis is the average price level, not the inflation rate. Converting the model to use inflation instead of the price level is a pretty straightforward, but tedious, exercise. I’ll ask fearless readers who have made it this far to trust me on this.[8]

Now suppose there is a negative (adverse) supply shock. Some factor may cause wage rates to rise across the economy. Or a major virus outbreak in China can disrupt supply chains. The decrease in quantities of intermediate goods causes prices to rise. Figure 6 shows the short-run equilibrium. 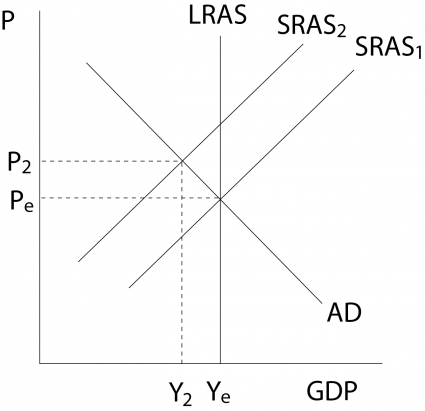 Note something interesting about Figure 6.  The SRAS curve has shifted up because production costs have increaed.  Firms will take two actions to offset this cost increase.  They will lower output to Y2. And they will raise prices to P2. This the consequence of any adverse supply shock.

Now economic policymakers face a dilemma. The source of this dilemma today is the same as it was 50 years ago. Both fiscal and monetary policy have their most immediate impacts on aggregate demand. There may be some influences on aggregate supply but those take longer to appear.

Consider Figure 6 again. Suppose policymakers decide to fight unemployment. They do this by engaging in expansionary policies: lower interest rates, increase government spending, and/or cut taxes. That will shift the AD curve up and to the right as shown in Figure 7. 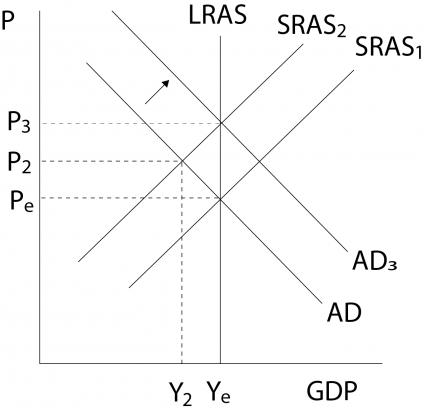 You can see the problem. Increasing employment also causes the price level (inflation rate) to rise.

OK, suppose the folks working on policy decide to fight inflation. Figure 8 shows what happens then. 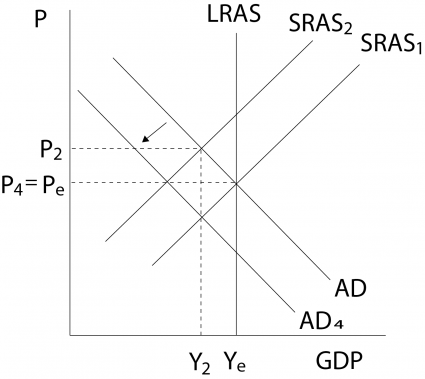 Stagflation presents policymakers with real dilemmas. They can only solve one problem by making the other worse.

There is a good argument to be made that economic policy should do nothing when faced with an aggregate supply shock like this. The economy will eventually return to full employment on its own. The mechanism is that the real wage – the dollar wage adjusted for changes in the price level – must fall. This can be accomplished in two ways. First, nominal wages (the wage rate in dollars per hour) can fall. Remember, at Y2 there is high unemployment. Eventually the excess labor supply will cause wages to fall.

The second way the real wage can fall is with a higher price level. This is the reason many central banks around the world set 2 percent inflation as a target. A bit of inflation erodes real wages just a little bit. But the economy will return to full employment faster with a touch of inflation.

Figure 9 shows the effect of a fall in the real wage rate. 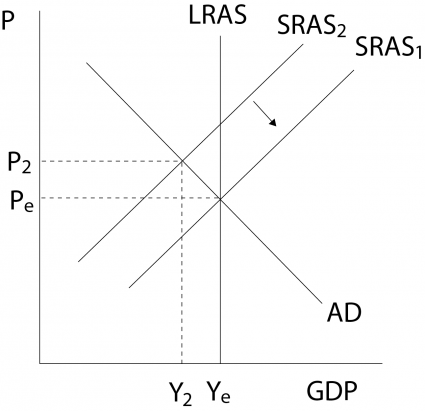 A highly infectious virus is causing a negative supply shock. This leaves policymakers in a quandary. They can fight inflation. But that makes unemployment worse. Or they can fight unemployment, making inflation worse. But one thing they cannot do is persuade people and businesses to buy goods and services that simply do not exist.

10 Replies to “Economic Policy and COVID-19: It’s Impossible to Buy Goods and Services That Do Not Exist”