Testing does not confer immunity. In the social media circles where I travel many people seem to implicitly believe otherwise. I regularly hear people saying, “What we really need is COVID-19 testing.” There’s just one small problem. Someone could be tested negative today and be infected tomorrow. If there are delays in reporting the results, they could be infected before they even get their test results. Add to that the problem of false positive tests and one fact stands out: reopening the economy at any reasonable time will cause some people who go back to work to contract COVID-19. And some of them will die.

There are about 330 million people in the U.S. We can’t possibly test every single person on the same day, then return results immediately. Exactly how is testing supposed to save us? And what is it supposed to identify?

The answer to the second question is important. We are testing to find out who has acquired immunity. After all, some people aren’t even aware that they had the disease. The problem is that testing is looking for a few needles in a very large haystack. Let’s say 5 percent of the U.S. population (about 330 million) is currently infected. That’s 16,500,000 folks. If you test 500 randomly chosen folks, you expect 2.5 positives. The point is that you cannot test the entire population on a single day. Therefore, some people who test negative will be infected after their test.

What Testing Does and Does Not Do

Here’s the bad news. COVID-19 is a fairly smart virus. It knows not to cause a fever for several days. But during those symptom-free days it is contagious. In other words those fever checks being done in numerous venues will catch only part of the contagious group.

In fact, the only real solution to COVID-19 is to acquire immunity. The hard way is to catch the disease then recover. But until the risk factors are better understood, people would be reluctant to voluntarily choose this course. Even now we are pretty sure the virus is especially dangerous for the elderly, those with other medical conditions, and the obese. Personally, I think lung damage is also a factor, but I’ve seen no actual research on this. For this group, COVID-19 will confer perfect immunity by killing the infected person.

The other path to immunity is vaccination. That is what we really need. And we need it sooner rather than later. The best estimate for a vaccination is the first quarter of 2021. If we wait until then, there will be very little economy left to re-open. I personally would rather take a chance on an early human trial of an experimental vaccine than actually getting the disease. Caveat: I am well above the age where COVID-19 starts being seriously fatal.

This leads to an inevitable conclusion. A likely path to re-opening the economy is to allow those with positive tests to go back to work. For very small businesses, there may have to be some cooperative employee-sharing to fully staff up. This will be a new line of work for temporary employment agencies.

But this path also creates danger. Some of those with false positives will be infected. A few of those infected will die. And there is no practical way to avoid this.[2] The economy can’t be shut down until everyone has immunity. Doing that means there will be no economy to re-open. 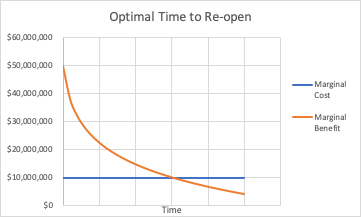 Note that the horizontal axis is not labeled. I have no idea what the time units should be.

The new infections are the problem. Using my assumptions (and ignoring births and deaths from other causes), after 36 months about 85 percent of the population will have immunity. About 8,400 people will no longer be with us. That’s a death rate of 0.84 percent of the original population. But there will still be new infections.

One question is, “Where are the data scientists?” By now there should be enough data to start looking for commonalities among those infected as well as deaths. Yet the focus appears to be solely on modeling. I put together the Excel workbook with my simple model in about a day.

According to Andrew Gelman,[4] the models used by IMHE[5] (for example) are extraordinarily simple. They start with an assumed number of total deaths then move backwards over time to develop the pattern. With all due modesty, my simple Excel model has more behavioral elements than that.

There are some new figures from Iceland where they chose to not shelter in place. The infection rate was 1% and the death rate was 0.01%. I sure hope those numbers apply to other countries as well. But I suspect some countries, including the U.S., have populations that are not as homogeneous as Iceland’s.

However, plugging those numbers into my model gives some interesting results. Naturally there are fewer infections and deaths. What’s interesting is that the Iceland numbers indicate the virus will persist much longer than the shelter in place strategy. As noted earlier, shelter in place reaches 84% of predicted total deaths in 36 months. Using Iceland’s strategy it takes 180 months. There are many fewer deaths but the disease hangs around much longer.

There is an obvious action the government should take. Now that serology tests are available, those who have acquired immunity should be allowed to go back to work. One way to be sure they are immune is to only allow those who had the disease and recovered to go back to work.  For others, there are two stipulations. First, each individual must be fully informed about the problem of false positives.  Second that their household must also test positive for immunity so they can’t be infected by viruses on clothing, and so on.

What happens if we let non-immunized people into the restaurants and stores? Some will be infected. They will infect others. Remember, COVID-19 is contagious before symptoms develop. Even those who test negative are not risk-free. Any test will have false negatives, reporting a few people as virus-free when, in fact, they are infected.

Some argue that a small business employing 10 people can’t function if only 1 returns to work. I suggest mergers, acquisitions, and job-sharing (actually employee-sharing) among the businesses. This is one case where cooperative economics makes sense.