The Powerpoint for the Mac equation editor is broken.  First I’ll tell you about suggested fixes (that don’t always work).  Then I’ll tell you how to solve the problem.

Before plunging into details, let me describe my hardware/software setup.  I’m running OS X Catalina 10.15.4.  My Macbook is a mid-2015 model (11,4 technically).  The internal drive is 1 tb solid state.  I have a 4 tb external hard drive where most of my work gets done.  The 1 tb solid state drive is from Other World Computing, the only place I know of that supplies authorized upgrades like this. They are now offering 2 tb for this model. Powerpoint for the Mac is part of our Microsoft 365 subscription.  The version currently installed is 16.37 (20051002).

I’m working with a number of decks that include equations.  Sadly these equations were created with a previous version of the equation editor.  But that’s not the real problem.  The equation editor is often unavailable.  And the solutions only work sporadically.  The problem is best viewed by looking at the Insert pull-down menu (on your left).

When confronted with problems like this I go looking for help. The first helpful suggestions were on SuperUser.com.  And, amazingly, I found a thread on the Microsoft support site that seemed to offer solutions. Forthwith the suggestions.

If you go that route, be aware that just moving those directories to any hard drive directly attached to your computer is likely to fail.  Recent versions of Office are very aggressive about locating files that have been moved.  In my case I copied the files to our QNAP NAS, deleted them from the Macbook.  That worked.  Temporarily.

When the Fix Stops Working

Today, however, nothing worked.  The equation editor was dead.  Luckily I know Microsoft will never, ever let you give up Windows.  Among other things, Powerpoint for Windows has many, many more animation options than the Mac version (also true for Excel). That’s why I have one of our Microsoft 365 licenses installed and running in Windows.

This is not as difficult as you might imagine.  For approximately forever I’ve had vmWare Fusion installed on my Macbook.  Fusion is an amazing product.  It gives full access to the entire Macintosh file system.  Install a copy of Windows and you’re good to go.  Then install Word, Powerpoint and Excel (for Windows, of course).

Of course, you may just have a second computer running Windows.  That works, too.

In any case, open the file using Powerpoint for Windows.  Find any equation.  Double click the equation.  You’ll see this: 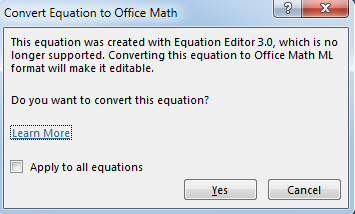 This is terrific, especially once you read the text after the checkbox.  Check that box, click OK and every equation in your file will be converted to something your version of Powerpoint understands.  Open it in Powerpoint for the Mac and you can work with the equations.

Conclusion and a Note About Microsoft

As noted above, this issue has been extensively discussed on the Microsoft discussion board.  I tried to post the problem to the broader Microsoft community and was informed that this was not the place to report a bug.  The following message was included:

You’ll have to leave a message and wait for a callback.  I got my call today.  The support tech asked about the problem.  She then wanted to access my computer.  I declined the offer and asked her to report this as a bug.  She added that she could not report this as a bug because I was the only one who had complained about it.  I referred her to the Microsoft support forum for others with the same problem.  I suspect she won’t.

Bug reporting seems to go in cycles. In addition, different companies respond differently.  That also changes over time. Ten years ago this suggestion would have been accepted at Microsoft.  Today not so much.