In the long run, inflation is always caused by excessive increases in the money supply.  We can (and do) argue about how long it takes an economy to reach the long run.  But it’s probably longer than a few years, but shorter than the infamous quote from Keynes:

In the long run we’re all dead.

This is the second of a three-part series on inflation, its causes, and money in the U.S.  Part 1 was a swipe at Facebook’s Fact”check” process. Part 3 will look at major components of the CPI and their contributions to overall inflation.

How to Reduce Inflation

If you don’t understand any of those points, there are many articles on this blog that will help you.

The issue is measuring the “average price level.”  Despite its many limitations, markets and policymakers have settled on the Consumer Price Index (CPI), the average price paid for a bundle of goods and services purchased by a typical urban household during a given time period.  The CPI is reported monthly.  It includes price indexes for goods and service categories such as apparel and gasoline. It is also reported for each state and major metropolitan areas.

Why does the CPI use urban households? First, rest assured this includes suburbs.  The reason is that rural Americans often produce some of what they consume.  This is most common in farming and ranching.  To a certain extent, as farming some items becomes more industrialized, this exclusion is a little obsolete.  But it is what it is.

The Federal Reserve measures inflation using the price deflator for personal consumption expenditure (PCE).  The PCE has the advantage of broader coverage and a slightly better method of calculation.  But it is reported quarterly rather than monthly.  And it is revised three times (once per month for three months) after the initial estimate.  That means the most accurate value for PCE is not available until three months after the end of the quarter.

But the only way to lower the inflation rate is to reduce the growth rate of the money supply, at least below the current inflation rate.  Since the beginning of 2019 that has been far from the truth.  Here’s the data. 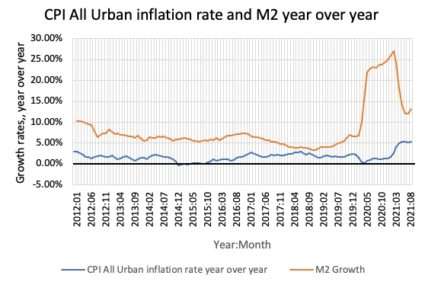 What’s happening today is eerily similar to the events of the 1970s.  I spent much of that decade in Stanford’s Ph.D. program in economics (class of 1980).  I got to watch events unfold while hearing commentary from very smart economists around at the time.  Those memories are seared into my brain.  For those who says economics does not evolve, the entire macroeconomics curriculum was rewritten as a result of that decade. Read this to understand what’s happening today.

Those who cannot remember the past are condemned to repeat it.
— George Santayana

The 1970s were a decade of tumult in the U.S. and world economies.  OPEC (Organization of Petroleum Exporting Countries) sharply reduced oil production, driving global oil prices very high.  This led to a supply shock, an increase in the average variable cost of production for the entire economy.

For those unfamiliar with how oil is used in production, it is far more pervasive than you imagine.  Most of us immediately think of motor vehicle gasoline and oil.  But oil also goes into asphalt, paving the roads on which we drive.  More obscure uses are plastics.  Just about every piece of plastic started out as oil.  Some synthetic fabrics also have their origins in that barrel of black, gooey liquid. During the 1970s oil was still burned to generate electricity.  Power generating plants made changes after that decade.  Today, those plants can switch between oil and natural gas quickly and at low cost.  Electric generation became a more flexible production process, benefiting everyone.

Supply shocks pose difficult decisions for policy makers.  Macroeconomic policies are oriented toward managing demand, not supply.  I discussed this in detail here.

With that as background, let’s look at inflation and money growth in the late 1970s and early 1980s.  The Federal Reserve used a compromise monetary policy, allowing some inflation but keeping unemployment from rising as much as it might have.  That policy ended March 8, 1978 when President Carter appointed G. William Miller as Fed chairman.

Mr. Miller was a lawyer.  His previous job was CEO of Textron, then a Rhode Island conglomerate.  His qualifications for Fed chairman were skimpy (at best).  And it showed.

The problem with Miller’s policy is best summarized by Prof. G.L. (Lee) Bach, one of my mentors in graduate school.  Prof. Bach was a member of the Fed’s Academic Advisory Committee during this episode.  He returned from one meeting shaking his head.  I asked him what was wrong.  He replied, “The Fed doesn’t think they can control interest rates.”  Here’s how that works.

Even worse, if the Fed reduced the money growth rate, markets would react to the reduced liquidity by raising interest rates!  The Fed literally could not control interest rates in the sense that any policy change caused rates to rise.

Mr. Miller’s term in office was thankfully brief. On August 6, 1979, he resigned and was replaced by Paul Volcker.  Ironically, President Carter’s two Fed chair appointments were one of the worst and one of the best in history.

Mr. Volcker understood what was happening.  He targeted the quantity of money in circulation saying, in effect, “Let the market determine interest rates.”  And they sure did.

Today’s events are similar.  The decrease in aggregate supply is being caused by the policy responses to COVID.  First, the lockdowns drove at least 25 percent of small businesses into bankruptcy. (My guesstimate, no apologies.)  Extended high unemployment benefits combined with fear have made some workers reluctant to get jobs.  COVID vaccination mandates have caused many workers, public and private, to quit their jobs (Seattle police and firefighters) or engage in extended sickouts (Southwest Airlines).  All of this has reduced the supply of labor.  There are 3.1 million fewer workers in the labor force today compared to January, 2020.  The labor force participation rate has fallen from 63.4% to 61.6% over the same period. Here’s the data. 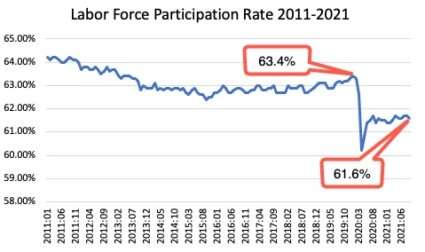 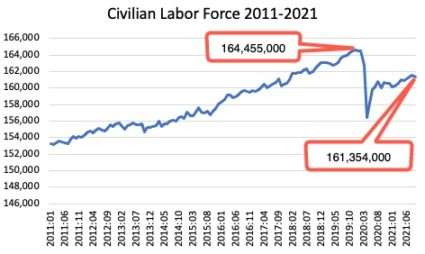 This was not caused by COVID. Government policy responses to the pandemic caused most of the problems.  The lockdown was stupid, as we’ve learned from Florida (not to mention every single flu pandemic in history).  Vaccine mandates without exemptions for natural immunity are equally stupid.  If anything, those who have recovered from COVID have a stronger immune response than those vaccinated.  The rush to push vaccinations for kids under 16 is highly suspect.  Statistically, that group does not die from COVID.

I am not a vaccination denier.  My wife and I are both fully vaccinated (Moderna).  But we are in the prime group harmed by COVID. We are old.  For us, the long-term effects of the shots are considerably less worrying than those of a 25 year old.  At our age, “long-term” is shorter than either of us would prefer.

Government policies reduced the quantity of available labor.  The Fed has been printing money so fast the presses are smoking.  And fiscal policy has been wildly expansionary and has the potential to rise much more.

The Federal Reserve controls the quantity of money in circulation.  Money, measured by M2, includes currency, the amount deposited into checking and savings accounts, and a few other items.  Creating new money has no direct impact on government spending.

Government spending and taxes apply to income and spending.  Money is used to finance spending.  But money is neither income nor wealth.  One quick and dirty relationship is known as the quantity theory of money.  It states

In the quantity theory equation, M is the quantity of money in circulation.  Think of this as the stock of purchasing power in the economy.  P is the average price level and Y is real gross domestic product.  I’ll introduce V shortly.

V is the velocity of circulation of money. Think of this as the number of times the stock of money is spent during a year.  Assuming V is constant, let’s see how this equation works. (Yes, I know, in the short run V is not constant.)

What happens when M increases?  Clearly, PY must rise.  The issue is how the increase is distributed between P and Y.  If most of the increase is Y, more goods and services are being produced.  That causes income to rise.  Economists usually view this as a favorable development.

But if P rises, that’s inflation.  Economists have a negative view of that.

The real problem is that transitory, short-run inflation can become semi-permanent if the supply shocks are accommodated by monetary policy.  That is exactly what we’re seeing today.

If you still think inflation is transitory, you really need to read some more articles on this blog.  Try this and this and this.

Part 3 of this series will look at the major components of the CPI.  Here’s a quick look at the summary. 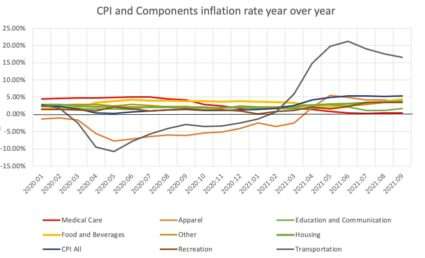 That dark line that rises far above the others is Transportation.  I’ll delve further into that sector in part 3.

One Reply to “Inflation, Its Causes, and Money”