On May 20, Sen. Josh Hawley (R-MO) questioned Energy Secretary Jennifer Granholm on the U.S. energy situation, specifically the (very) high price of gasoline.  During this, he gave a list of actions the Biden administration has taken to decrease U.S. fossil fuel production.  I’ll embed an audio clip.  The transcript is below.  (The transcription was done using Otter.ai, a fantastic service.  I’ve made minor corrections to compensate for places where the two were talking over each other.  But the audio is untouched except for a standard noise reduction pass through Adobe Audition.) 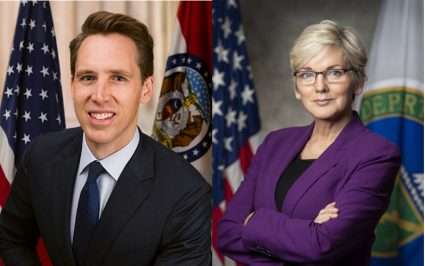 SEN. HAWLEY: In the state of Missouri the average price of gasoline today as of this morning is $4.10 average price of diesel is $5.18. And I’m sure you’ve seen the reporting this morning. That now AAA is projecting that gas prices will hit a national average – AVERAGE — of $6 a gallon by the month of August. Is this acceptable to you?

SEC. GRANHOLM: No, it is not. And you can thank the activity of Vladimir Putin for invading Ukraine and pulling us …

SEN. HAWLEY: Oh, nonsense. With all due respect, Madam Secretary, that’s utter nonsense. In January of 2021, the average gas price in my state was $2.07. Eight months later, eight months later, long before Vladimir Putin invaded Ukraine. That price was up over 30% and it has been going up consistently since. What are you doing to reverse this administration’s policies that are drawing down our own supply of energy in this country, that are throttling oil and gas production in the United States of America? What are you doing about it?

SEC. GRANHOLM: With respect, sir, it is not administration policies that have affected supply and demand.

SEN. HAWLEY: How can you say that when the price of gas was up over 30% from January.

SEN. HAWLEY: Madam Secretary, so why don’t you answer my question. From January to August, the price of gasoline was up over 30%. In my state alone, it has been a continuous upward tick since then. And here’s what your president didl when he first came to office. He immediately reentered the Paris Climate Accord. He cancelled the Keystone pipeline. He halted leasing programs in Anwar. He issued a 60 day halt on all new oil and gas leases and drilling permits on federal lands and waters. That’s nationwide. That accounts by the way for 25% of US oil production. He directed federal agencies to eliminate all supports for fossil fuels. He imposed new regulations on oil and gas and methane emissions. Those were all just in the first few days. Are you telling me that’s had no effect on our energy supply?