Back in March 2021, I wrote about the explosive growth of M2. Several commenters noted that part of this increase was offset by the dramatic drop in velocity. I have since pointed out that relying on changes in velocity to offset bad monetary policy was not a good idea. This article discusses the reasons, explains why income velocity may not be the best measure of the rate at which money circulates through the economy, then presents an argument favoring the idea that velocity may have decreased permanently. Along the way I’ll discuss the difference between growth rates and levels of economic variables.  As always, my methods and data are transparent.  Click here to download the Excel workbook.

The income velocity of money is generally defined as nominal gross domestic product divided by the quantity of money in circulation.

In this equation, P is the average price level measured by the GDP deflator, Y is real GDP, and M is the quantity of money in circulation. PY is, by definition, nominal GDP. M is M2. This is a definition. Monetarist economists try to convert it into a behavioral equation by multiplying both sides by M and changing the identity sign into an equals sign (≡ to =).

Velocity is assumed to be a behavioral variable, determined by institutional factors in the banking system and decisions by people and businesses. Intuitively velocity measures the number of times the stock of money is spent during a time period. One major question is how to measure “spending.” That creates the distinction between three measures of velocity: income velocity, spending velocity, and transactions velocity. I’ll discuss each of these.

Since May, 2020, when the definitions of M1 and M2 changed, M2 has become the best measure of the money supply. Here’s what has happened to income velocity since 2010. 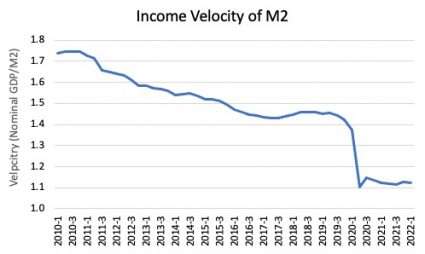 Another counterfactual will illustrate this. As noted earlier, In the fourth quarter of 2019, M2 was $15.2 trillion, GDP was $21.7 trillion, and velocity was 1.42. If velocity had returned to 1.42 in the first quarter of 2021 (when M2 was $19.6 trillion), GDP would have been $27.9 trillion, fully $5.9 trillion above its actual level. If you think inflation is bad now, be happy velocity has remained low. I promise that a good chunk of that additional $5.9 trillion nominal GDP would have been caused by an increase in the price level (inflation).

Regular readers of this blog will understand that this is a misuse of GDP. Gross domestic product measures production, not spending. (If you’d like an explanation, here’s a link to my earlier article on the subject.) The only justification for using nominal GDP in the numerator is the national income accounting identity that says national income equals national product. Spend a few minutes delving into the definition of national income and you’ll quickly learn that there are many items that bear little relationship to money transactions. 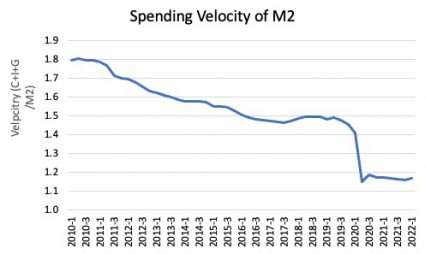 Spending velocity has the same general shape as income velocity, but its values are about 0.1 greater. That’s because not all income is spent. Some is saved. Including saving in velocity seems wrong. But that’s what the income velocity does.

where T is the money value of all transactions in the economy. 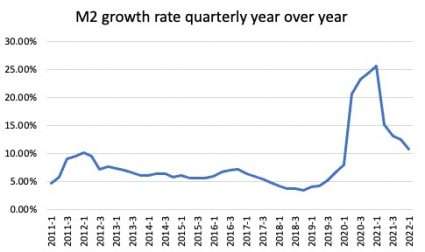 I’ll just note that even though velocity has not returned to its pre-pandemic levels, it has stopped falling. That means growth rates in M2 become growth rates in PY and C + I + G . Given supply constraints in the U.S. economy, real GDP seems unlikely to grow much. More inflation is on the way.

Why Has Velocity Remained Low?

This is the remaining question. The answer is the long-term impact of the COVID pandemic and policy responses to it. Spending velocity fell to 1.15 in 2020:2. It has risen slightly since then but remains well below the 1.49 level of 2019:2. The reason is the major change in the payments system.

An early misconception about COVID was that it could be transmitted by physical contact and from surfaces. Retail businesses rushed to implement no-contact payment systems. Apple Pay and Google Pay became very popular since customers literally did not have to touch anything except their smartphone. These transactions are mainly financed with credit cards. Similarly, online shopping and home delivery boomed. Walmart and Target began delivering groceries ordered online to homes and businesses. Third-party delivery services such as Doordash and Instacart boomed.

The result of all this was to further erode the link between money and spending. Transactions shifted sharply to credit, with money only used to pay the credit card bill. Money is being spent at a lower rate. This is a decrease in velocity. Further, these changed spending habits are unlikely to change in the near future because they simplify spending. In effect, buying a pair of shoes with Apple Pay costs less than paying with cash or even a physical credit card.

This stuff is important. Understanding the relationship between money and spending is critical to understanding how an economy works. Knowing how levels of a variable are affected by its growth rate is fundamental. An added bonus from all this is being able to figure out why velocity dropped so abruptly and has not bounced back.