The December 18 New York Times Magazine includes an article by Adam Davidson, one of the founders of NPR’s “Planet Money” series.  In this case, the Planet Money team strikes out.

Mr. Davidson writes about looking for leading economic indicators, specifically variables that predict the future path of some other economic variable.  In this case, the variable of interest is real per capita disposable income.  Davidson’s preferred leading indicator:  “The amount of French Champagne that Americans consume has predicted — with nearly 90 percent accuracy — the average American income one year later.”  He offers the following graph as evidence.

With all due respect, Mr. Davidson should stick to reporting.  Economists have spent six decades using all sorts of statistical tools to understand consumption spending.  Frankly, an R2 of 0.90 is not even worth mentioning.  (I assume that the “90 percent accuracy” refers to the adjusted R2.)

As an example, let’s consider the economist’s standard fallback position when we know next to nothing about a variable: a simple regression of the variable on the number of the time period.  Davidson uses data from 1996 through 2010.  Based on the graph above, it’s pretty clear he’s using annual data.  That’s fifteen years of data.  I created a simple variable for time in which 1996 was numbered 1, 1997 was numbered 2, and so on until 2010, which was numbered 15.  I then did a regression of real disposable per capita income on time.  (Real per-capita disposable income was taken directly from the Bureau of Economic Analysis’s Table 7.1.  Data available via link from http://www.bea.gov. )  The statistics are shown below.  To summarize, my regression explains 98.5 percent of the variation, far better than champagne sales.  Of course, this result is not as sexy or marketable as Mr. Davidson’s.  If he wants to play in this sandbox, he should stop writing and get a Ph.D. in economics like the rest of us. 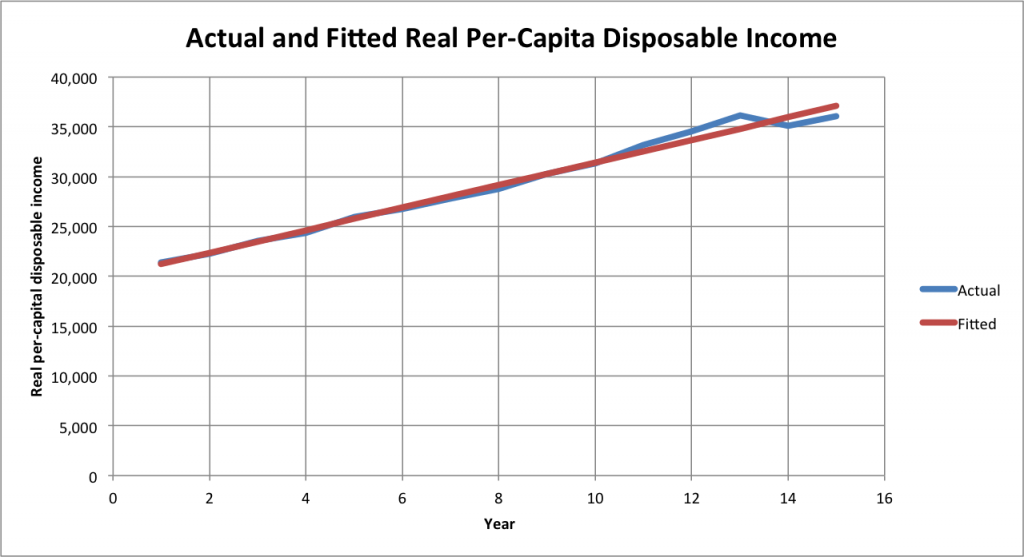