In today’s New York Times Magazine (December 22, 2013) author Annie Lowrey argues in favor of raising the minimum wage. I will present fairly detailed rebuttals shortly, but one paragraph can save you a bit of reading:

The Times is just plain wrong.  The true minimum wage is zero.  That’s what you make when you lose your job because the minimum wage was raised. 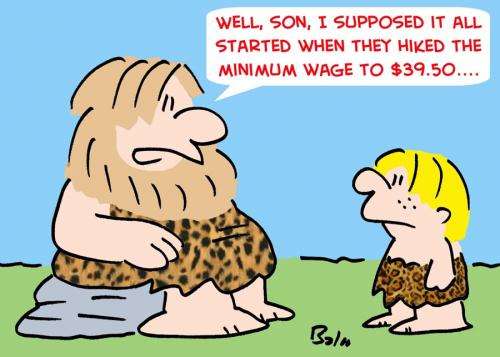 Raise the minimum wage to $50!

Ms.Lowrey refers to a single paper, the infamous “study” done by Alan Krueger and David Card when both were at Princeton.  That work has been discredited almost since the moment it appeared.

She also quotes Michael Reich, a “professor of economics at the University of California, Berkeley.”  She failed to add that Dr. Reich is also the Director of the Institute for Research on Labor and Employment, a well-known organization that shills for unions. He is a co-author of The Capitalist System: A Radical Analysis of American Society. His partners in this project were Richard C. Edwards (Author) and Thomas E. Weisskopf (Editor).

Prof. Evsey Domar of M.I.T. published a scathing review of this work in the Journal of Political Economy (Vol. 82, No. 6, Nov. – Dec., 1974, pages 1301-1313).  An excerpt from that review is at the end of this article.  I will just add that, if anything, citing Krueger, Card, and Michael Reich makes me more likely to believe raising the minimum wage reduces employment.

One of the most difficult facts of life for people to accept is that demand curves slope downward.  When you raise the price of something, a smaller quantity will be purchased.  This has been confirmed in millions of empirical studies.  Yet when it comes to the labor market some economists — albeit self-styled economists — throw out centuries of economics research and engage in magical thinking. 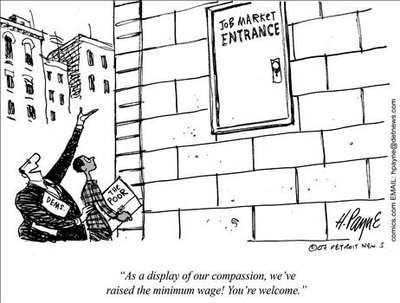 How the Minimum Wage Actually Works

Review of My Previous Articles

Raising the minimum wage reduces employment.  In a survey article, David Neumark and William Wascher (National Bureau of Economic Research, Inc, NBER Working Papers: 12663, 2006) summarize the results of 102 empirical studies of the impact of the minimum wage on employment. These studies were all done after 1990.  To economists that means the studies were done carefully and correctly using the appropriate statistical techniques.  Of the 33 studies the authors selected as being the “most credible” 85 percent found a significant negative impact of a higher minimum wage on employment.  William Even and David Macpherson have also published an extensive study that focuses on the impact on members of the labor force between 18 and 24 who are not high school graduates.  They looked at a sample of about 600,000 males between 16 and 24 years old without a high school diploma.  They examine the impact on three groups: whites, Hispanic, and black. Among white males in this group, the authors find that each 10 percent increase in a federal or state minimum wage decreased employment by 2.5 percent; for Hispanic males, the figure is 1.2 percent. But among black males in this group, each 10 percent increase in the minimum wage decreased employment by 6.5 percent.  (No, this is not evidence of racism. The job choices made by each of the groups account for most of the differences.)

Perhaps the Times should talk to some real economists the next time they decide to write about economics.  Instead, they persist in finding economists with views that match the writers’ and editors’ world views.  Which makes the Times even more of a joke than it is already.

“An analysis of capitalism, like any analysis, can be expected to consist of two parts: first, a logical formulation of a hypothesis showing how this or that evil is caused by capitalism; and, second, an empirical testing of the hypothesis against the reality of capitalist and noncapitalist systems. There is no shortage of logical formulations, of different degrees of plausibility, in the book. But there is almost a complete absence of empirical verification. Since the evils are both complex and not easily quantifiable, the authors (that is, the editors and the contributors) could not be required, at least at this stage, to come forth with a battery of regression equations, but surely, as a first step, they could have made an attempt to examine historical trends and to establish the presence or absence of each evil in other capitalist and noncapitalist countries. In particular-most fortunate for this attempt-there are now several socialist countries, some of them quite advanced and most of them sharing our common cui tural background. On one of them-the Soviet Union-there exists a large literature in English, while the others have not been neglected either.

But no comparisons of any importance are made in the book. We discover that there is not a single socialist country in the world! The Soviet Union and the other East European countries are referred to as “state socialism” (pp. 4, 277, 281, 362, 524-25) or as “so-called socialist” (p. 277). They are treated with disdain and together with the state-capitalist countries (England, France, or Sweden) are declared not to be “model societies of socialism to be emulated” (p. 4). Worse than that, “The state socialist countries of the Soviet Union and Eastern Europe are to true socialism what ‘the monsters of the paleolithic era are to present animal species: clumsy, abortive, prototypes”‘ (p. 4).

If countries which have been regarded by themselves and by others to be socialist have turned out to be so1nething else, surely an explanation is in order. Since none is provided in the book, let me suggest two alternatives. Lenin, Stalin, and, by implication, all other socialist leaders-including Tito and Mao–never intended to build socialism. (2) They did try, but failed miserably, ending up with “Paleolithic monsters,” in fact.

I will leave the choice and the consideration of the sad implications of each alternative to the reader.”

One Reply to “The Minimum Wage Again”