The March 7 New York Times included this article claiming that the problems at Staples are caused by the shift to online sales:

We own a Ricoh Aficio CL7200 color laser printer.  We bought this beast at the end of 2006.  It still works wonderfully, but finding toner cartridges and other consumables has become a bit of a problem.  I expected a search.  What I did not expect was that the Staples ordering system would cause so much grief.  (For the record, I looked at OfficeDepot.com.  Their site was honest enough to tell me that what I wanted was out of stock.) 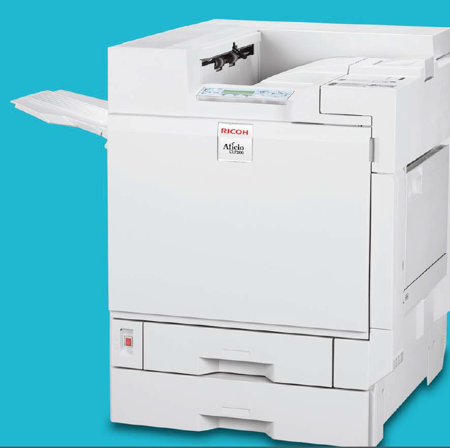 The printer needed a new magenta toner cartridge and yellow was getting low, too.  Because the software that reports toner levels has apparently failed, I was getting erroneous reports.  My lovely wife noticed that her color printing was showing defects in the red areas.  Sure enough, the magenta cartridge was empty.

As noted earlier, I started with OfficeDepot.com.  The website told me these cartridges were out of stock.  So over I went to Staples.com.  I was cheerfully informed that everything was fine.  I got a confirmation e-mail. (Details in this message and others have been blurred so you can’t steal my identity.) 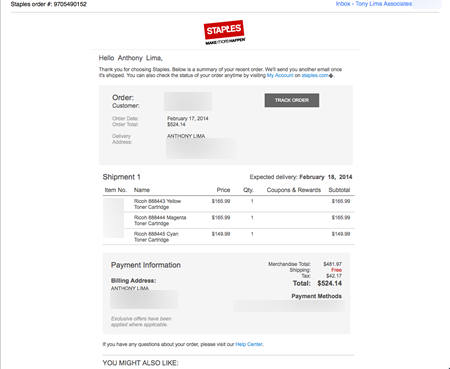 The first problem was the tracking information: 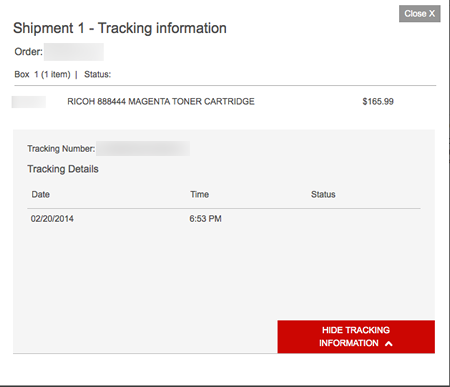 There is a tracking number there, but no mention of the name of the carrier!  I suppose I should have assumed UPS, but frankly the information given when you click the “Track Shipment” button should be more, um, informative.

Then the real fun started.  Later that afternoon I got two e-mails informing me that the cyan and yellow cartridges were out of stock.  If you look carefully at the three e-mails below you’ll realize that Staples has access to time travel.  The time on my order was 2:38 pm, but the times on their replies were both 1:18 pm.

Thus began my first call to customer service.  Note that the magenta cartridge was apparently in stock, so I wasn’t too worried.  After all, that’s the one I needed most.  The nice lady at customer service managed to track down a yellow cartridge somewhere.  She then said she had a substitute for the cyan cartridge.  I said, “Sure, ship it” while being very skeptical that she had, in fact, found a substitute.

A Word About Staples Customer Service

The Staples customer service representatives could not have been more helpful.  They were calm, courteous, and generally knew what they were doing.  It became apparent, however, that they are using parts of the same website that supports the online ordering system.

Back to the Main Story

On February 19 the yellow and (allegedly) cyan cartridges arrived.  Sure enough, the substitute fort the cyan cartridge was not a cartridge at all.  It was one of the photoconducting units.  (Trust me, you don’t want to know.)   I went online and set up a return for that item.  Note that the web page promises pickup March 7.  Much to my surprise our nice UPS lady showed up February 21 asking for the box! 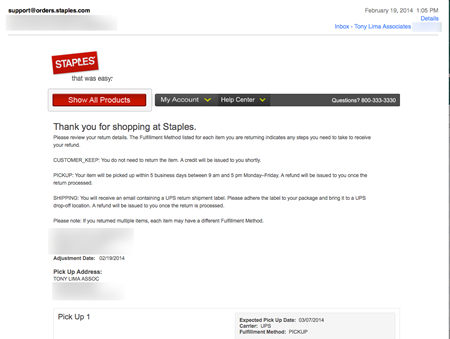 While I was there I checked the status of the magenta cartridge.  Guess what?  The Staples website now reported it was out of stock!

Another call to customer service.  The nice lady gave me $15 off my order.  She also asked me if it would be all right to just void my original order and cut a new one for the magenta cartridge. “Sure, why not?” I replied.  Later that day I got a confirmation e-mail.  Take a close look at this one, too.  Staples promised same-day delivery!  Impressive.  But untrue. 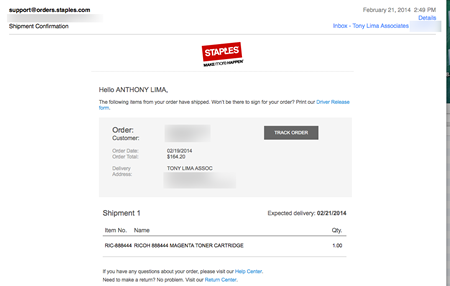 February 25 I got yet another e-mail telling me my most recent order had not shipped.

Email February 25, 2014 Something Not Shipped

Another call to customer service.  The third nice lady managed to actually track down a magenta cartridge.  It arrived a couple of days later — too late for my wife’s crash project, but at least we could use the printer again.

There are problems at Staples, but they begin with the online ordering system.  Closing 225 stores does nothing to solve the real problem.  I know it will be quite a while before I shop at Staples.com again.