Over on Twitter a bit of a name-calling contest has broken out between @AztlanConnect (who claims to live in California) and several residents and/or fans of the great state of Texas.  Texas, by the way, is soon to be the home of David Burge (@IowaHawkBlog) who is wisely relocating from Chicago.  Thus, we have California versus Texas.

The current dispute started when I posted a translation table to help Californians relocating to Texas. (As always, click the image to see a larger version.) 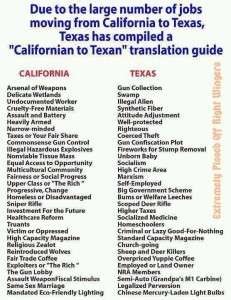 So I decided to perform the usual market test of which state was more popular: the one-way rental rate for a standard U-Haul™ 10 foot truck between Oakland and Austin and vice-versa.  The results are similar to previous studies over the past few years: 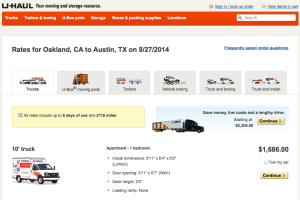 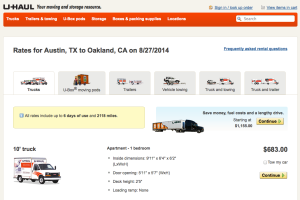 Oakland to Austin costs $1,686.  Austin to Oakland is priced at $683. There is apparently high demand for Oakland – Austin trips and low demand for Austin – Oakland.  I offer this not as a definitive analysis but as one more data point in a long time series.

AztlanConnect has a blog, but I won’t connect to it because as far as I can tell (s)he wishes to remain anonymous.  I have to point out that, with one exception, everyone else involved in the Twitter conversation used their actual identity.  And I have to confess bias at this point.  I believe women should be allowed to remain anonymous on the internet, but men should be forced to post under their actual names.  The reason is simple: there are far more male than female stalkers out there.