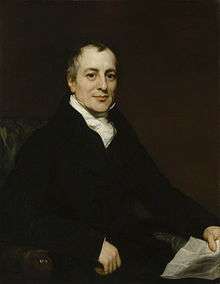 Portrait of David Ricardo by Thomas Phillips, circa 1821. This painting shows Ricardo, aged 49, just two years before his death.

Ricardo’s seminal work was his theory of comparative advantage. His paper “On the Principles of Political Economy and Taxation” was published in 1817. That means next year will be the 200th anniversary of this historic piece.

I will not discuss the theory here. Instead, my purpose is to urge my fellow economists to engage in two activities. First, celebrate this important anniversary. Second, redouble your efforts to educate the public on the merits of free trade. Current public opinion and political winds seem to indicate a serious lack of information on this subject.