Several people have mentioned that my previous entry about operation twist was a little terse.  Let me see if I can be more expansive this time.

First, everyone should understand that the net change in the U.S. money supply will be zero.  The Fed will sell $400 billion in short-term government securities.  Then they will quickly pass those funds into their other hand, using it immediately to buy $400 billion in long-term government securities.  No change in the money supply.

The effect of this is also straightforward.  $400 billion is a lot, even in U.S. government securities markets.  When the Fed sells short-term securities, that will increase the supply of those securities, causing their price to fall and their yield to maturity (interest rate) to rise.  (If you don’t get that, read on.)  Similarly, buying $400 billion in long-term securities will cause their price to increase and their yield to fall.  Thus, the Fed is trying to twist the yield curve (aka term structure of interest rates).

A bond is simply a promise to make one or more future payments on specified future dates.  Some promises are more trustworthy than others.  If the U.S. government, IBM, or General Electric makes a promise like that, there’s a pretty good chance they’ll keep their promise.  On the other hand, if I have a great idea for a new product and try to raise funds in the bond market to finance my startup, … well, let’s just say I wouldn’t buy one of those bonds myself (unless the promised interest rate was very, very high, in which case the bonds would have junk status).

The price of any bond (and most assets) is the present value of its future payments.  Present value is easy.  Let’s take a minute to learn about it.

If you believe that — and, frankly, I’ve never met anyone who doesn’t believe it — then you also have to believe the present value of $102 to be paid a year from now is $100.  I’m still assuming the interest rate is 2%.  The present value must be $100.  You can see this with a little algebra.  If FV = PV(1 + r) then PV = FV/(1 + r).  Always remember, the laws of both physics and mathematics are more powerful than the laws of economics!

The point of all this is that the price of any asset will move in a direction opposite to the change in the interest rate.  For example, suppose the interest rate rose to 5% but we were still going to receive $102 a year from now.  The present value would be PV = $102/1.05 = $97.14.  At five percent, the $102 a year from now is only worth $97.14 today, not $100.  The price of an asset and its interest rate (technically called the yield to maturity) always change in opposite directions.

Oh, yeah, the yield curve.  This is a graph with time to maturity on the horizontal axis.  (A bond matures when it makes the final promised payment, usually including a large amount commonly called the maturation value).  The vertical axis is the interest rate on securities of varying times to maturity.  Here’s the yield curve for September 23, 2011:

Back to Operation Twist

Now it should be clear what the Fed is trying to do.  By selling short-term government securities, short-term interest rates should rise.  Buying long-term bonds should cause their interest rates to fall.  And the yield curve will rotate clockwise (for those of you old enough to remember what that means).

It’s traditional to include the yield curve one year earlier for comparison purposes.  As you might expect, longer-term securities have higher interest rates than shorter-term securities.  The reason is simple.  A lot more things can go wrong in 10 years than in 3 months.  Intuitively, the longer the promised stream of payments, the more likely something very bad will happen that disrupts the cash flow.

Here’s what the Fed is trying to do: 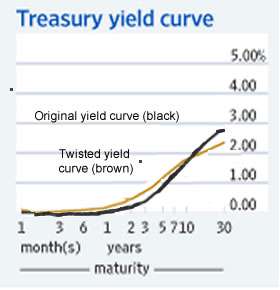 Will it work?  Probably not, but no one can accuse the Fed of not giving it their best shot.