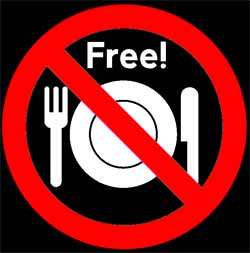 “There’s no such thing as a free lunch.”  Who invented this wonderful phrase? NPR’s “All Things Considered” just credited Barry Commoner with inventing the phrase (http://www.npr.org/2012/10/02/162176994/paul-revere-of-ecology-sounded-alarms-on-pollution accessed October 2, 2012).

Transcription is by me from the mp3 file download.

“The late environmentalist Barry Commoner came up with four laws of ecology:

I don’t much like Wikipedia, but even they got this one right (footnotes omitted, see http://en.wikipedia.org/wiki/There_ain’t_no_such_thing_as_a_free_lunch accessed October 2, 2012):

“”There ain’t no such thing as a free lunch” (alternatively, “There’s no such thing as a free lunch” or other variants) is a popular adage communicating the idea that it is impossible to get something for nothing. The acronyms “TNSTAFL,”” TANSTAAFL and TINSTAAFL are also used. Uses of the phrase dating back to the 1930s and 1940s have been found, but the phrase’s first appearance is unknown.[1] The “free lunch” in the saying refers to the nineteenth century practice in American bars of offering a “free lunch” as a way to entice drinking customers. The phrase and the acronym are central to Robert Heinlein‘s 1966 libertarian science fiction novel The Moon is a Harsh Mistress, which popularized it.[2][3] The free-market economist Milton Friedman also popularized the phrase[1] by using it as the title of a 1975 book, and it often appears in economics textbooks;[4] Campbell McConnell writes that the idea is “at the core of economics”.[5]

It happens that in my youth I read quite a bit of Mr. Heinlein’s writing.  I can well remember both the novel and the use of that phrase.  Personally, I’ve always preferred TANSTAAFL (There ain’t no such thing as a free lunch).  But, no matter how you phrase it, Mr. Commoner did not invent it.  I seriously doubt that he was the first to use the phrase in environmental discussions.

I won’t comment on “nature knows best” except to say that Mr. Commoner apparently never encountered a rattlesnake, ebola, or an active volcano.  He needed to get out more.