This article was provoked by two stories.  One, a column in the Wall Street Journal by Hank Brown discusses the increasingly intrusive role of accreditation agencies in university administration.  The second is from the January 15 San Jose Mercury-News. The headline almost says it all: “Schools receive F in spending, C overall.” I decided it was time to discuss the state of education in the US and California.

I had originally planned to make this one article.  But as I began delving into accreditation issues, I suddenly found myself with a 1,700 word post.  Therefore, today I will only deal with the two newspaper articles cited above. The rest of the week is pretty busy, so there’s a good chance I won’t get around to part 2 until next week.

Accreditation is important for every university.  The federal government, in its infinite wisdom, decided a few years ago that federal student aid — Pell grants, student loans, you name it — would only be given to accredited universities.  There are numerous such agencies, ranging from accreditation of four-year college programs to graduate and professional schools.

Mr. Brown is the former president of the University of Colorado and the University of Northern Colorado.  He has dealt with many accreditation agencies.  He points out that these agencies are now second-guessing decisions by administrators up to and including the Board of Trustees.  But his focus is near the top of the administrative food chain.  Specifically, he notes that

… the Southern Association of Colleges (SACS), one of six regional accreditors recognized by the U.S. Department of Education and the Council for Higher Education Accreditation, to put the University of Virginia, founded in 1819 by no less than Thomas Jefferson, on “warning.”

SACS’s action comes in the wake of efforts by the University of Virginia’s governing board this summer — later reversed — to remove President Teresa Sullivan in favor of a leader more aggressively focused on cost controls. After months of criticism and second-guessing of the board’s decision, last month the accreditor sanctioned the university and placed it on a warning status pending further investigation.

Unbelievable.  A university’s Board of Trustees is apparently no longer allowed to actually run the university.

I have personally witnessed the explosive growth of  micro-management by accrediting agencies.  I am now semi-retired from teaching economics at California State University, East Bay (Hayward, CA).  Our economics department is part of the College of Business and Economics.  As such, we are accredited by the Association to Advance Collegiate Schools of Business (AACSB).  In a strangely ironic twist, the AACSB website has a .edu extension, supposedly reserved for accredited colleges and universities. (If anyone is interested, I’ve managed to track down two lists of approved accrediting agencies, both from the U.S. Department of Education website.  The first is a 73 page description of the accreditation process, including a list of four-year college agencies.  The second is a simple list of recognized accrediting organizations.  It’s only three pages, but it’s dated 2005.)

The University as a whole is accredited by the Western Association of Schools and Colleges (WASC). At least that group has the humility to use a .org extension.  Let’s see what the accreditation standards look like.  My objective is to show why several administrators at CSUEB (and, most likely, other universities) devote virtually every working hour to maintaining accreditation.  There are many hoops to be jumped through, they vary in shape and size, and they move around frequently.

I want to discuss accreditation in detail, but first let’s look at the second article (from the Mercury-News).

Schools Downgraded for Lack of Spending 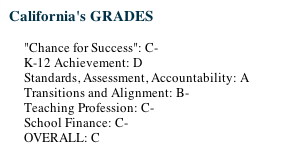 Yes, you read that correctly.  California’s school grades are shown on the left.  Note the grade for “Standards, Assessment, Accountability:” an A.  If someone would like to explain how the system can get an A in that category and a D in “K-12 Achievement” I’ll be happy to listen.

The one item not included in the scoring shown here is “school spending” for which the state got an F. Quoting from the article,

California has received an F in school spending on the annual Education Week report card, which helped drag down the state’s overall grade to a C in how it runs its schools — a dismal ranking that places it 36th among the 50 states and Washington, D.C.

There’s only one problem.  The average of the six grades shown on the left is 2.11 — which is slightly above a C.  Including the F for spending drags the average down to 1.81, a borderline C-.  The idea that the F dragged the average down to a C is just plain wrong unless it’s not a straight-up average.

But enough about media innumeracy.  I’m here to talk about what it all means.  Economists look at education as a production process.  We have inputs:

When evaluating productivity, student learning outcomes, or anything else it’s important to measure output, not inputs.  But spending and “school finance” are inputs.  So are “Teaching professions” and “Transitions and Alignment.”  These are measurements of means, not ends.  Regardless of how you feel about testing students, I hope you’ll agree that measuring inputs — particularly “spending” — is not useful.

Stay tuned for more (much more) about accreditation.