The May 5, 2013 New York Times has an interesting piece on youth unemployment.  Economics writer David Leonhardt interviews economists about the youth underemployment rate.  (Based on the description, the measure used appears very close to the Bureau of Labor Statistics’ U-6 rate.)  The article points out that the underemployment rate in the 25 – 34 age group is 26.6%, well above even France (22.0%).

The article goes on to note that economists cannot explain why the youth underemployment rate is so high, especially compared to the year 2000 when the same rate was 18.5% for the U.S.  While it would be interesting to examine the annual rates between 2000 and 2012, I don’t have time for that today.  Instead, let’s just look at current unemployment rates by age group.  The graph below shows that the unemployment rate in the 25 to 34 age group is about two percentage points higher than any of the four older groups. 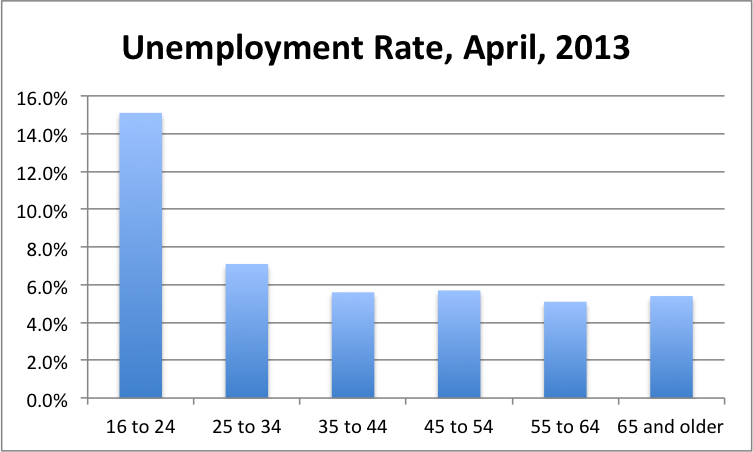 Here’s some speculation.  I’ve written many times about the heightened uncertainty in the economy.  This has been created by the Obama administrations regulations, including Obamacare, the Dodd-Frank financial reform bill, and the host of regulations emanating from the EPA, the Bureau of Labor Statistics, the Civil Rights division of the Justice Department, and a host of other areas.

Economists have known for decades that hiring a new employee is not completely a matter of acquiring the quantity of labor that makes the marginal revenue product of labor equal to the wage rate.  There are a variety of theories, most of which complement each other: efficiency wages, labor hoarding, and so on.  Many of these theories were developed to explain the procyclical behavior of labor productivity.  Productivity tends to rise during expansions and fall during downturns.  The simplest explanation for this is that hiring an employee entails a certain amount of “setup costs.”  These include advertising, screening, interviewing, and training.  Therefore firms will try to hang on to workers even when demand decreases — at least if the firms believe the decrease in demand is temporary.