A recent discussion on Twitter requires more than 140 characters to respond.  The issue is whether it makes sense to use public funds to help build a new arena in Detroit for the Red Wings franchise.[1]  Yes, you read that correctly.  The bankrupt city of Detroit will chip in a cool $284 million to partly cover the estimated $650 million project cost.[2] Should Detroit build a new arena using public funds?  Most economists say, “No.”  Read on to learn why.

Here are links to some recent news articles: Fox News, The Nation, and ESPN.

There have naturally been consultant studies showing the amazing benefits this project will bring to Detroit.  After all, the consultants don’t get hired if the client isn’t pretty sure about their conclusion.  The economics profession, however, has a long history of studying public financing of professional sports facilities, be they ballparks, stadiums, and/or arenas.  The results are not encouraging.

I will post a link to a long bibliography (19 books and articles including abstracts).   But let’s look at one simple set of numbers.

Local and state governments in the U.S. should eliminate subsidies to professional sports franchises.

Dennis Coates and Brad R. Humphreys surveyed the economic literature on public financing of stadiums in a 2008 paper.[3]  Near the beginning they report on a survey done by Robert Whaples in 2006.[4] [5] The group surveyed was a random sample of  American Economic Association members.  The question was simple. Do you agree or disagree with this statement?→

The responses will surprise only non-economists reading this article: 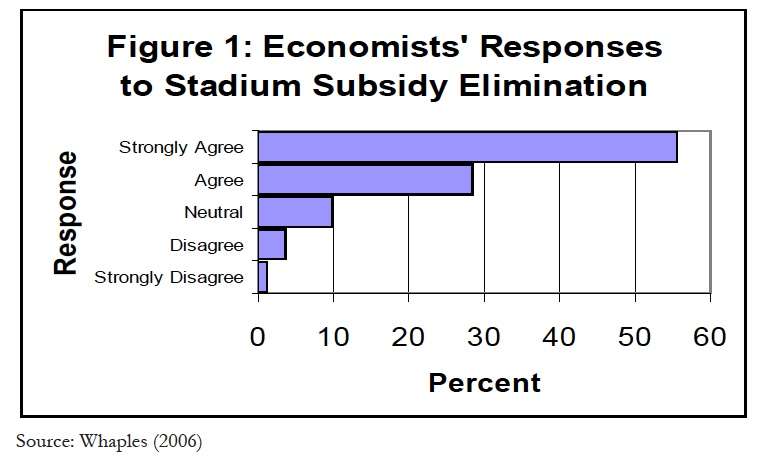 I have posted a pdf version of the Coates and Humphreys paper.  Follow the obvious link.

John Siegfried and Andrew Zimbalist are two of the better-known sports economists.  Their paper “A Note on the Local Economic Impact of Sports Expenditures” appeared in the Journal of Sports Economics in 2002.[6] Here’s the abstract (emphasis added):

Public subsidies for sports stadiums and arenas are often justified as a means to boost the local economy. The argument relies on historical local economic impact multipliers that misrepresent the effect of consumer expenditures on professional sports. Sports expenditures are subject to extraordinary consumer substitution away from other local expenditures, and they suffer unusually large first round leakages from the local economy because, inter alia, players export their earnings to the locale of their permanent residence. This note illustrates the extent of such leakages using information about the permanent residence of players in the National Basketball Association. While 93% of average employees live in the area where they work, only 29% of NBA players do the same. The illustration shows that a standard local economic impact multiplier exaggerates the stimulative effect of sports expenditures by over 400%.

To read the full article in pdf form, click here.

Roger Noll is one of the pre-eminent sports economists.  He has, for example, been a consultant for the Major League Baseball Players’ Association.  I’ve already introduced Andrew Zimbalist, so I won’t do that again.  The two co-authored a book a few years ago. Sports, Jobs, and Taxes: The Economic Impact of Sports Teams and Stadiums[7] is obviously relevant to this blog entry.  Luckily this book was reviewed by William Kaempfer in 1998.[8]  Here’s what Dr. Kaempfer has to say:

If one measured the importance of public policy issues by the amount of talk-radio discussion devoted to them, public subsidization of professional sports stadiums becomes one of the defining issues of our day. This timely volume by Professors Noll and Zimbalist should (but probably won’t) put the issue to rest. The clear conclusion here is that about sports teams and their stadiums there is no dispute–they are abysmally poor engines of local economic development, and the expense of publicly financed stadiums cannot be justified on economic grounds.

I’ve compiled a bibliography of 19 books and articles on this subject.  It’s fairly long, but that was the only way I could persuade the web site to include the abstract with the article citation.  The two reviews include the entire text of the review.  Click here to view this as a web page.

Economists agree that public subsidies for professional sports stadiums are a bad deal for the public.  But team owners use their leverage — up to and including threatening to move their team to another city — to engage in rent-seeking with local politicians.  A few years ago, Seattle refused to pony up a new arena for their National Basketball Association team.  Meanwhile Oklahoma City had a shiny new arena that wasn’t being used at all.  Now Oklahoma City has the team and Seattle basketball fans have to settle for either the Portland Trailblazers (NBA) or the University of Washington.

It’s always tempting to say, “But this time it’s different.  Detroit is not the same as those other places.”  In fact, nearly every time it’s the same.  Economists have looked at this over and over.  In virtually every case we have found that using public funds to help finance a private venue is a bad deal for the taxpayers.

[1] For those who don’t follow sports, the Red Wings are one of the long-standing teams in the National Hockey League.

[5] Disclaimer: I have worked with Dr. Whaples a bit in the past, specifically on a book review he asked me to do in his capacity as president of the Economic History Association.  The EHA eventually decided not to publish the review, as it had been accepted by a more suitable journal.

[6] Siegfried, John and Andrew Zimbalist. “A Note on the Local Economic Impact of Sports Expenditures.” Journal of Sports Economics 2002 3: 361.