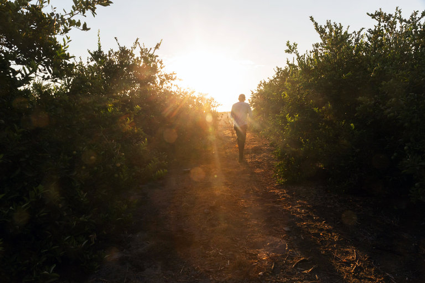 Disclaimer: I am currently receiving a pension from CalPERS. I also receive Social Security and payments from a self-funded 403(b).

The California Public Employees Retirement System (CalPERS) is the largest public pension fund in the country. Public pension plans keep two sets of books. The accounting method reported to the public uses actuarial standards. The other method, not reported ever, uses market values. Any economist worthy of the title will tell you that market valuation is the correct way to value, well, just about anything. The scandal is what happens when a pension plan tries to leave CalPERS’s not-so-tender embrace.

(For future reference, CalPERS plans are defined-benefit plans, guaranteeing monthly pensions based on formulas, usually involving the length of time one is employed. Most private sector pension plans (including 401(k), 403(b), IRA and SEP-IRA) are defined contribution plans in which the employee and employer contribute to the plan. The eventual payments depend on the market value of the fund at the time of retirement. The easiest way to make withdrawals from defined contribution plans is by using the balance to purchase a single or dual lifetime annuity.)

The Saga of Citrus Pest Control District No. 2

That happened to Citrus Pest Control District No. 2, serving just six people in California. The agency tried to pull out of CalPERS to convert to a 401(k) plan instead. CalPERS had assured them they were well above the minimum required balance.

For public reporting purposes, CalPERS discounts future pension liabilities using their assumed annual rate of return, currently 7.5 percent per year.  But market interest rates are considerably lower.  Later I’ll discuss the California Pension Tracker.  For now, just note that the discount rate that website uses is currently 3.723 percent, about half what CalPERS assumes.  A lower discount rate means a higher present value of future liabilities.  That present value is what any defined benefit plan should have on hand when an employee retires.  By using a higher discount rate for public reporting, CalPERS is vastly underestimating the true extent ot pension liabilities..

Today’s New York Times Business section has a long article analyzing public pension plans with an emphasis on CalPERS. Most employees of the state of California are automatically enrolled in this institution as part of the standard employment package. But other agencies can also sign up for coverage.  Here are some excerpts from that article.  (The article may be behind a paywall.  If you run headfirst into said paywall, e-mail me and we’ll work something out.)

When one of the tiniest pension funds imaginable — for Citrus Pest Control District No. 2, serving just six people in California — decided last year to convert itself to a 401(k) plan, it seemed like a no-brainer.

After all, the little fund held far more money than it needed, according to its official numbers from California’s renowned public pension system, Calpers.

Except it really didn’t.

In fact, it was significantly underfunded. Suddenly Calpers began demanding a payment of more than half a million dollars.
…
That was the case with the pest control district for years. And since there seemed to be a surplus, Calpers said the district owed no annual contributions. Calpers’s numbers hid it, but the six members’ pensions were going unfunded.

“Every economist who has looked at this has said, ‘It’s crazy to use what you expect to earn on assets to discount a guaranteed promise you have made. That’s nuts!’” Professor Sharpe said. 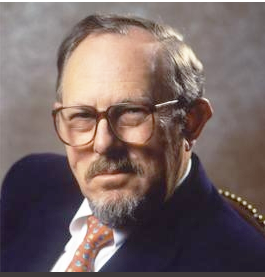 Professor Sharpe is, of course, Professor William F. Sharpe, inventor of the capital asset pricing model, long-time professor of finance at the Stanford Business School, and Nobel Laureate in Economics (1990). Professor Sharpe now lives in Carmel-by-the-Sea, California. He calculated the market value of Carmel’s pension liability. The results were eye-popping and terrifying. In 2013 Carmel-by-the-Sea had unfunded pension liabilities of $22,972 per household from CalPERS only. (Total unfunded liability was $25,914.)

I audited Prof. Sharpe’s graduate finance course when I was at Stanford. And I’m proud to say that my alma mater has done a public service for the citizens of California. The Stanford Institute for Economic Policy Research (SIEPR) has assembled a website that crunches the numbers for you. Here’s the summary for the entire state:

And here are the top ten governmental entities ranked by unfunded pension debt per household. Data is for 2013, the most recent year on the website. 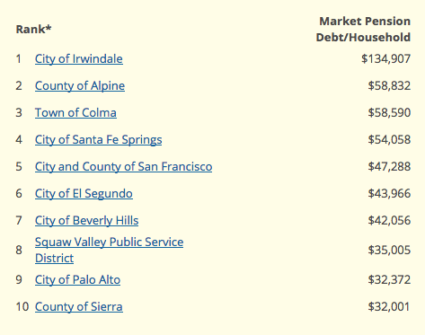 Dr. Joe Nation, the project director, credits both faculty and student members of the team for creating and maintaining this site.  There are plans for expansion later this year.  In an e-mail, Joe described them as

BTW, we are appending 2014 to CalPERS and independents next month, plus adding CalSTRS pensions.  Then we’re adding retiree health (aka OPEBs) for all 2,700 CA local government agencies.  I expect the 2014 total “pension debt,” or unfunded liability, to hit about $1.1 trillion.  Then OPEBs will add about another $200-$300 billion.

Sunlight is the best disinfectant. It’s about time CalPERS was called out for their accounting shenanigans.