Is the state heading toward third-world living?

Tony Lima
August 23, 2015
Copyright 2015 Tony Lima. All Rights Reserve. May not be quoted, excerpted, or otherwise cited without written permission from me.

[This excerpt includes the introduction and the executive summary.  The full pdf version of the report is below.  Please note and respect the copyright notices.=

The latest round began on Monday, July 27. At 10 am our landline and cell phones rang at the same time. We knew what was coming: Tuesday would be a PG&E “SmartDay.” And we got the same call Tuesday and Wednesday mornings: three straight SmartDays.

The SmartDay program contributes significantly to the deterioration of the quality of life in coastal California. But it is only one of the state’s policies that seem designed to induce people to leave. Add in the disastrous mismanagement of the state’s water resources and it’s easy to write about the sorry state of California. 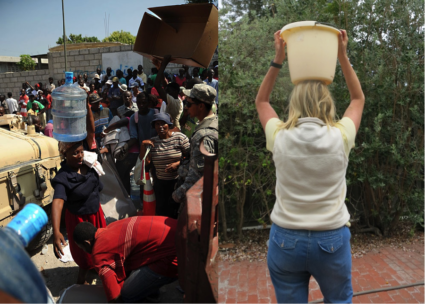 Figure 1 Compare and contrast. Left: A Haitian woman carries a 5-gallon jug of water on her head.
Right: A recent scene from a northern California back yard.[1]

California imports 43 percent of its electricity consumption. The main sources are Oregon and Nevada (hydroelectric), Arizona (coal and natural gas), and unspecified foreign countries (most likely Mexico). The reason is simple: the state’s devotion to green energy has produced very cost-ineffective power generation. The state is importing electric power and exporting pollution.

The water situation is, if anything, even worse. Proposition 1, the $1.1 billion water bond issue passed last year, has a clause that basically prohibits any of these funds from being used to increase supply. Here’s the relevant description:[2]

Nancy Vogel, deputy secretary for communications at the California Natural Resources Agency, said the project is not eligible for funding from Proposition 1, as funding cannot go to any project that would negatively affect a river protected under the state’s Wild and Scenic Rivers Act.

Most of the $1.1 billion is devoted to conservation, research, and (of all things) flood control.

The most promising idea to increase supply is to raise the height of the Shasta Dam by 18.5 feet. Proposition 1 funds cannot be used for this. Senator Diane Feinstein (D-CA) has introduced a draft bill (FLO15C29) that devotes the first 97 pages to fish before getting to Title IV: FEDERAL SUPPORT FOR STATE AND LOCAL DROUGHT RESILIENCY PROJECTS. This includes payment of up to 25 percent of total project cost or $20 million, whichever is smaller. The estimated cost of raising the height of the Shasta Dam is $1.4 billion. It’s pretty clear that the state can only count on $20 million from the Feds.

Where will the other $1.38 billion come from? Good question. The state doesn’t seem to have an answer.

[1] Photo of Haitian woman carrying a 5-gallon jug of water on her head amongst other residents collecting relief aid in Petit Place Cazeau, Port-au-Prince, Haiti, Feb. 23, 2010, during Operation Unified Response. U.S. Soldiers assigned to the 82nd Airborne Division provide security during the relief operation. Photo by MCCS Spike Call. Public domain photograph from defenseimagery.mil. Photo on the right by the author.

The Sorry State of California v3