Is Russia’s banking system collapsing? Or perhaps the private banking system in Russia is being gradually taken over by the government. That would be consistent with Mr. Putin’s past behavior. It appears three of the four largest private banks are being deliberately punished by the government. An article on the Financial Times website dated September 18 includes new information about Russia’s largest banks. → 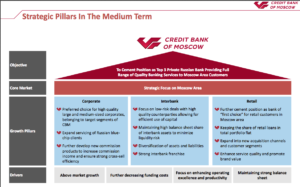 There may be elements of retaliation involved. This summer Credit Bank of Moscow withdrew its rating from Expert RA, a Russian agency. Credit Bank CEO Vladimir Chubar said the withdrawals were made by a single large state-run organization in the aftermath of the rating revocation. 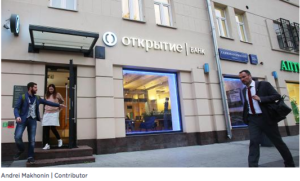 A branch of Otkritie bank

All this comes in the wake of the crisis at Otkritie, once Russia’s largest private bank. Last month Russia’s central bank had to bail them out. In that instance, state-run corporation withdrawals led to a run on the bank. Otkritie lost a full third of its balance sheet over the summer. According to Bloomberg, in June and July alone the bank lost 26% of deposits from all customers, totaling 433 billion rubles. The central bank has accused Otkritie of cooking its books and manipulating bond prices. (Unfortunately I was unable to find the amount withdrawn by state-run enterprises.) ()

Those three banks are part of the “Garden Ring,” located on Garden Ring Road in Moscow. The fourth bank, Promsvyazbank, saw state-run business deposits increast by 79 percent in August to a total if 98 billion rubles.  Interestingly, Promsvyazbank’s website is only available in Russian:

But Google translate says this:

According to my calculations, total net withdrawals[1] were $475 billion rubles out of total deposits of 1,888.9 billion. That’s a serious hit to any bank’s capitalization. Bloomberg says,

Bank of Russia Governor Elvira Nabiullina has overseen a purge that has seen one in three lenders lose their licenses since 2014 as she attempts to eliminate under-capitalized institutions. This is the first time the cull has impacted one of the 10 lenders designated as systemically important by the central bank, with the bailout financed through a new fund created to assist in the consolidation of the banking sector.

At the same time these four banks were declared too big to fail by the central bank. Given the way Russia is being governed, the real mystery is why the banks were not simply nationalized.
A good working hypothesis is that Mr. Put8in wants to maintain the appearance of a market economy.  Private banks are crucial to that process.

[1] Withdrawals from Otkritie include all depositors. Activities at the other three banks are only state-run enterprises.