Today the Bank of England announced a new design for their £50 note. This new UK banknote features Alan Turing. The note will be released on June 23, Mr. Turing’s birthday. 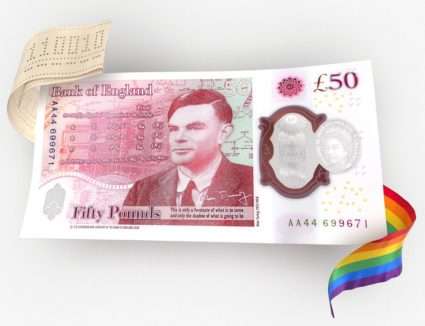 Here’s what the B of E has to say:

Commenting on the new note, Governor Andrew Bailey said: “There’s something of the character of a nation in its money, and we are right to consider and celebrate the people on our banknotes. So I’m delighted that our new £50 features one of Britain’s most important scientists, Alan Turing. Turing is best known for his codebreaking work at Bletchley Park, which helped end the Second World War. However in addition he was a leading mathematician, developmental biologist, and a pioneer in the field of computer science. He was also gay, and was treated appallingly as a result. By placing him on our new polymer £50 banknote, we are celebrating his achievements, and the values he symbolises”.

The Bank also noted Turing’s persecution by legal authorities because he was gay.  There’s much more information about Turing and his work on the Bank’s website (scroll down below the image of the banknote).